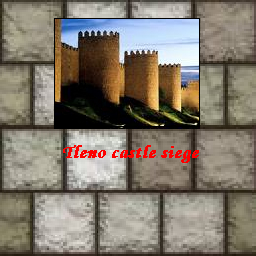 This bundle is marked as useful / simple. Simplicity is bliss, low effort and/or may contain minor bugs.
View usage Statistics Legacy download
Reactions: Misha and Alexander Corvinus
This is my first map, but I wont get upset if you will tell something bad about it.
Once, there was a two empires, the Kingdom of Castles and Siege empire. Siege empire declared war on Kingdom of castles, and sent their forces to destroy everyone in Kingdom.
You can command the defenders and try to protect your castle, or you can try to burn whole castle, by sending you forces in battle!

I made only few changes in this version. Its just becauce I dont want my map to be deleted. Ugh... can someone call for a map moderator?

I like it, but can you make it more players?

I will be waiting for more updates.Good job.

Icons 2
Good Job!
I've played it i think its look like TD...

I poor in English too
Beautiful map.Thanks you.

Maps 1
Hm it reminds me of the picture on Winter Maul Solo version, except reveresed. Still cool though! : )

Maps 1 StarCraft II Resources 2
What? I found this in google...

I will be sure to try it.

No offense ths is just my opinion but Siege Empire and Kingdom of Castles sounds kind of ehh you should make them better names.

Maps 1 StarCraft II Resources 2
Like? Maybe you have an idea?

P.S. There are weird names in other maps too. Like southern empire in battleships.

P.S. There are weird names in other maps too. Like southern empire in battleships.
Click to expand...

i think northern and southern empire in battleships are ok

i have a little idea

maybe it could be "Bagrian" as the attacker and "Linusia" as defender? (i like defending and my name is linus )

Maps 1 StarCraft II Resources 2
I could call it Tlenowheria, becauce I like defending too, but unfortunately, I call my spore planet Tlenowheria. But... I could really rename them... Maybe... hmmm... I need to think.

Its not hard just make up a arrangment of lettering that sounds cool and makes sense.

Maps 3 Spells 1 Tutorials 1
Hey, I gladly accept your offer of reviewing your map ^^
First of all: I'm not trying to flame you if there are any harsh comments (but in your description you've said that you don't mind, so it should be all right ^^).

It's a simple game without anything fancy, the triggers aren't really efficient and were leaking, the terrain outside the castle isn't good at all, some hotkeys weren't working and the description isn't good.
The castle, however, is pretty good, the game worked and seemed balanced.
There is an 'AI', which isn't really a good AI, but if you play versus 2 computers, it gets interesting.

I have added a map, so you can see how I've done the triggers.
The original triggers have been disabled, but still exist (so you can see the difference).
I have also fixed the leaks, something you should really learn.

Maps 1 StarCraft II Resources 2
Thanks ap0calypse, now I am very busy with Hero contest, but when it will be over I will continue this map. I have started to make new version long time ago, but it is still unfinished.

Leaks? When I was making this map, I didn't knew what is a leak. I tough its a buging trriger or something. Not so long ago I understood how to fix them...

Heavy units have much smaller attack and movement speed than light ones.

Terrain outside the castle? Yea, it sucks so I gonna work on it.

This is a very raw map. In "Tleno Castle Siege", all you have to do is train units that cost no resources. Both you and the enemy. The objective of the castle defenders is to protect the main building standing at the center of the keep, while the invaders' is to destroy it.

The defenders can only train elite units and a captain with special benefiting auras. The invaders don't seem to have anything available that can get past the hordes of Elite Crossbowmen, easily trainable by only a single player. They have less siege weapons than the defenders, possessing a Trebuchet with 1150 range and 220 HP. Three Elite Crossbowmen are enough to take it down in less than five seconds.

I don't know what else to say, really. Very crude terrain and rudimentary gameplay, and overall boring. This is a World Editor experiment, not a map, much less for multiplayer.

My rating for this resource is 1/5 (Unacceptable). The map is Rejected.

Maps 1 StarCraft II Resources 2
Okay ^^, thats not bad...
should I work on this map trying to improve it or should I abandon this project forever?
You must log in or register to reply here.