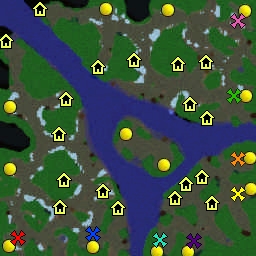 This bundle is marked as approved. It works and satisfies the submission rules.
View usage Statistics Legacy download
Reactions: deepstrasz and Heinvers
"Swallowed by the river and the mountains is a small island. There are riches inland as well, but the true treasure is surrounded by water. Goblins happily sell their goods to the factions seeking control of the land."
A melee map by Rui!

{EDIT 12-April-2009 19:54 GMT+1}
Before you say anything, I'll tell you that this is supposed to be a crazy melee map. There are lots of strategies to try out (for example, claiming the expansions of your enemy while all eyes are focused on the southeastern island fight).
Like I wrote on the Suggested Players field, this is best played with 8 people.

Check out my other official melee maps:

Map Info View Resources In Use Preview Triggers
Reviews
13:44, 19th Apr 2009 by bounty hunter2: A nicely pulled out melee, with an interesting land concept, yet it has minor problems, Approved with a 3/5 (Useful) rating. You can find my full review at post #13.
Read full review...

Packs 1 Maps 35 Spells 8 Tutorials 5
1) Description - The storyline and description was kinda short. It is alright and follow the rules.
2) Terrain - The terrain look fine, but the hill left a lot of question to be desire. You use boundary for the mountain to make it inpassable, but an air unit are suppose to be able to fly over the hill. It also look slightly unnatural for all those tree to be at the bottom of the hill.
3) Resources distribution - Resources distribution seems to be distribute fair. But, if this map was play at full house. There might be a little inbalance in lumber distribution for those who started at the south-east island.
4) Item drop - Reasonably balance, but 1 place doesn't seems to be balance. There is a Goblin Laboratory with 5 creep consists of 2 creep level 4, 1 creep level 3 and 2 creep level 2. However, there is only 1 creep that drop item and it drop level 2 permanent item. Try set it to either drop level 3 permanent item as well.
5) AI - The AI slightly affected if it started at orange, yellow, purple or teal base and the enemy is at the other island. That was because it does not have any waygate to reach other island.
6) Balance - The balance at the south-east island really left much question to be desire. The yellow and purple base is extremely close and making them extremely vulnerable. If this map was play at 4 vs 4 condition, it could bring 2 result.

Result 1 - Let's said I in Team 1, but I at the south-east island with 3 enemy and I am using night elf. It would be freaking easy to defeat me in few seconds.
Result 2 - If everybody at the same team at the same island, it make the base extremely easy to be defense.

This map quality was between 2 (Lacking) and 3 (Useful) due to the balance issue at the south-east island and the way AI had been effected.

1) Waygate - Add waygate at south-east island to make the AI performance does not be effected.
2) Item drop - Item drop of troll guarding Goblin Laboratory at south east island.
3) Distance - Yellow and purple base are too close, based on the geography of the island. It isn't good for 4 vs 4 or FFA match.

Since most of the issue just related to the island at south-east, my rating was 3 (Useful)

1) Description - The storyline and description was kinda short. It is alright and follow the rules.
Click to expand...

Melee maps do not need a story. Still, it is short because of World Editor's characters limit.

I have changed it to a level 3 charged.

5) AI - The AI slightly affected if it started at orange, yellow, purple or teal base and the enemy is at the other island. That was because it does not have any waygate to reach other island.


6) Balance - The balance at the south-east island really left much question to be desire. The yellow and purple base is extremely close and making them extremely vulnerable. If this map was play at 4 vs 4 condition, it could bring 2 result.

Result 1 - Let's said I in Team 1, but I at the south-east island with 3 enemy and I am using night elf. It would be freaking easy to defeat me in few seconds.
Result 2 - If everybody at the same team at the same island, it make the base extremely easy to be defense.
Click to expand...

Not having a gateway was intentional. Players starting 3v1 on the island, however, was not, and it always happened. This has been fixed. The two allies will now be closer to each other.

{EDIT}
By the way, the map IS supposed to be 4vs4, I wrote that in the Suggested Players field.

Tutorials 1
This is my review of (8)Swallowedv1.01

Pros:
-Terrain was quite nice, save for an oddly placed arch.
-The creep camps and item tables were done quite nicely.

Cons:
-The Arch was oddly placed, although I'm sure Rui will fix that.
-The amount of trees seemed a little low in some areas, although it could just be me.

Rating: 3.0 and recommended for approval.

Icons 1 Maps 8
Version 1.01b released! I have added a minimap picture, added some more trees to the southeastern island and also removed the misplaced archway.

Maps 1
This is probably the first melee map I've played in 2-4 months. I usually don't like to play melee but this map and playing with 3 guys was actually quite enjoyable experience for me.

Anyway, the terrain was comparable with Blizzard's own melee maps which I found quite surprising. The portals adds a lot to the game play but when paying against 4 computers they pretty much fuck up their AI which makes it probably best to play PVP.

Edit: Rui, remove the custom minimap image. It's rather confusing and kinda makes it look like a custom map.

Maps 1
I really don't like melee maps just because they get old, but this map is enough to make me actually want to play a melee map. Although it may have worked better with bridges. But that's why melee maps are best played with PvP.

Since when do they not? I have seen quite a few melee maps on Blizzard's site carrying a minimap picture.
Still, it has increased the size significantly and doesn't look good here at the Hive, so I'll probably remove it... I just hoped to have some more feedback to justify the editing of the map.
Click to expand...

I never seen a blizzard melee map with image on it. Setting the size to 128*128 might be the best solution, still the best would be no preview at all.

Icons 3 Maps 1 Tutorials 1
This is a decent melee map which has some good roots to play on.
Some negative sides are the doodads which may block building on specific locations.
The waygates where insane for a battle, but I'm pretty sure that it only happens with AI.

Overall, this map is a very good challenge and is stable to play on.
My rating: 4.

SwallowedV1.02 is an eight player melee map, where your goal is to destroy your opponent/s by taking one of the four melee races. The map is best played four vs four, although possible variations are two vs two. Other variations don't fit this map so good.

The terrain of the map was done decently. However I dislike the neutral buildings at creep camps, such as tents. They just don't fit there. And there is really little building space, I expanded almost to the waygate, and that's a bad thing, since the computer bumped in a lot, destroyed my buildings there.

The creep choice was good, however I disliked the drops. A creep group consisting of four creeps, such as an ogre and three trolls, should drop a tome and a permament, and it dropped only one item.

The map is balanced for a four vs four game, or any team game, a FFA can't be played on this map since it's heavily imbalanced then. But I guess you didn't plan this map to be a FFA. And again, the island on the south east didn't have the same amount of NPC as the two remaining.

To continue, the gameplay was nice. Being close to the computers meant that the combat began immidately. The waygates are always an interesting addon and make the game more interesting.

To conclude, a nicely pulled out melee, Approved with a 3/5 (Useful) rating. I've got Septimuses and hvo-s T-Ups for approval, including mine, thus approval

Septimus if you think your a such map maker. make the perfect map then.Stop going around messaging as if you know what your talking, unless you have a ****ing awesome map shut up dude.Also rui this map is good, don't listen to that septimus ****.
Last edited by a moderator: Apr 19, 2009

ProtossZealot said:
Septimus if you think your a such map maker. make the perfect map then.Stop going around messaging as if you know what your talking, unless you have a ****ing awesome map shut up dude.Also rui this map is good, don't listen to that septimus ****.
Click to expand...

It is called critism, not flamism like you do.
Please keep this thread clean, it is not necessary to start a war here.

Not the best map i seen,but it isnt the worst map i seen either.
Could be better in more ways then one.

But as they say...
A perfect map is made from users criticism and constant update.

Swallowed V1.02 by Rui is a 4v4 (can’t be played fairly with less) melee map with decent terrain and creeps. It may appear a little strange before you play it, but once you have, it will seem downright chaotic.

There are two islands with a group of two players (same team) and one island with two on two. It would seem like the two players alone would be free to tech, and the players together would rush. Its not that easy, though. There are teleporters to each island, making easy to get to the other players quickly.

The closeness of the players and the teleporters means your always fighting, harassing or creep-jacking your enemy.

Overall a good map. Somewhat limited playability due to design, but if the design was changed it would ruin the fun parts of the map. Could be further polished with more doodads in some places. 4/5 Not bad.

Maps 1
You should probably add a shipyard or something.

Maps 4
2/5.
It's strange. the enemy AI may just spawn right next to the player to the nearest mine. Some gold mines have neutral passive buildings aside neutral hostiles...
You must log in or register to reply here.

The Scourge of Lordaeron (RoCEX)