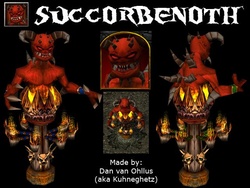 Descriptions:
This model was created for Mini-Modeling Contest #4 which follows the theme towers.
The demon is attached to the tower and will attack nearby victims as soon as they get too close. It attacks by creating a glowing ball that will shoot deadly projectiles when it bursts.
Since the demon itself is linked to ''bone_turret'', it will rotate towards a target unit when in combat mode.

The name Succorbenoth was taken from a mythologic demon, who's described as a ''chief eunuch, sexless, demon of gates''.

YOU MUST GIVE ME CREDITS IF YOU USE THES MODELS IN YOUR MAP!!!
Feel free to edit this model for your projects as long as you credit me for the model you based it from.

MDX files can have any path, though the portrait model must be in the same
path as the main model.

Recommended Object Editor settings (Combat):
Art - Projectile Launch - Z = 330.00 (or somewhere at that number)
Combat - Attack 1 - Animation Backswing Point = 0.700
Combat - Attack 1 - Animation Damage Point = 0.700
The combat settings may not be perfect, but that's as much as I can do to avoid awkwardness when launching projectiles. If you know a more professional method, let us know.