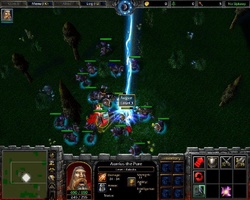 Reduces the attack speed of nearby enemy units by 20/25/30 %, also, if a unit affected by the aura gets targeted by a spell, its a chance that a random lightning will burst the enemy, dealing extra damage.

All Lightnings can trigger at the same time if you are (very) lucky, dealing massive amount of damage.

Leakless and MUI (i think). If not, please tell so i can fix it

. I can also add more levels if anyone want. This is a very simple spell, but i find it useful so i uploaded it

-Removed the "casting unit is a hero equal to true" condition

Moderator
11:57, 22nd Jun 2009 Coding: 2.5/5 The coding was alright (although quite simple), but you should really remove the 'Do Nothing' action. Global variables don't need to be nulled at the end of the trigger. On that note, you don't even need your...
Read full review...
Reputation Statistics
Page 1 of 2
Show Ignored Content
Page 1 of 2