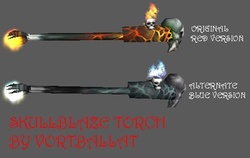 Heya, another weapon of mine

History:
The Skullblaze Torch is a torch, taken from hell and worn as a weapon by a devil, while leading his army to the middle world. The devil fell in the slice of a hero's sword and the torch weapon was taken as a trophy. The hero used it and killed many undead with it. However, time passed and the hero aged, he couldn't wield it anymore and he gave it to his only son in his final hours amongst the living, willing that he would rally his people to victory and drive the demons back to oblivion. The hero's son was corrupted by a the demon of charming and slaughtered his town and the nearby villages. The middle world would almost lose it's past glory, when another hero was born, being so fast and agile, that even light wasn't faster than it. The new hero, with his quickness and bravery defeated the demon of charming and unleashed the past hero from his dementery and ruthless murdering. However, the old, now free hero was too old to fight and the new young champion of the middle world, and only hope for bright future was granted him this powerful, yet terrifying look of a weapon. The hero was respected as a demigod after the last thing he did - he destroyed four tribes of undead and driven them back to the underground. However, the undead's power left scars to the land, which would not be healed. The champion of the middle world, as he was proclaimed, has decided to enter the evil and doomed underworld of oblivion and to stop an end to their tyranny. He called the greatest and powerful warlocks, hoping that they could open a portal to the undead's hell. But they couldn't hold such power to do this, and they tasked the young and brave boy to travel to the wastelands, where lies the last undead remnant on middle earth and bring it to them. The hero journeyed long time, facing many hurdles along his way and finally reached it - surrounded by undead and a portal to their world. The hero couldn't miss his chance, he stepped right into the waygate and disappeared at once. Many rumours say that the hero fell in battle with the great satana, some others say that he defeated him and proclaimed himself the king of the underworld. What happened actually? Nobody knows, this is a great mystery.

UPDATE:
1.Added Claws, holding a fire orb in the back side as Epimetheus suggested (thank you