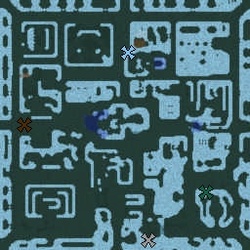 You and your crew of marines somehow landed in a unknown snow island, in which the cursed islands will test if you can survive their waves of undead. The past marines that died here left bunch of supplies, which can be used to save your life.

Gameplay:
In order to win, you must survive the waves of undead until your helicopter arrives to pick you and your team up. There are three doors to choose from in the beginning. The supplies from the helicopter is at the left bottom of the helicopter. Top left iron door is 1 boss each wave, though harder units. Top right iron door are 2 bosses each wave, though with weaker units. The ice door is just 1 last boss in the end, but it's where you survive waves of spiders not zombies.
I'm not going to say the gameplay is excellent because I'm not that fancy in World Editor and the map has some issues. Though, after you get the hang of the map, its's a ok map.

I forgot my old account, so I made a new account to upload this map.
Map Info:
-Map type-Decent Zombie Survival-PROTECTED.
-You use guns, turrets, medkits, keys, grenades, droids, and etc to win.
-Enemies consist of zombies/undead and bosses.
-Each door is easy, medium, or hard.

Etc.
-I lost my deprotected map a while ago, so I have somethings I can't fix.
-I have other versions in epicwar, but this is the latest version.

Fixes:
-Units are shared now when the player leaves.

Problems:
Because I can't touch my triggers cause I lost my unprotected map, I can't add load/save yet, revive triggers is causing me problems, problems with Mystic and Iron door, and some minor problems.
Other Info:
I forgot my account TerranMarine's password, so I made a new account to upload this version. Also there are small things I don't think I can fix because I lost my unprotected map.