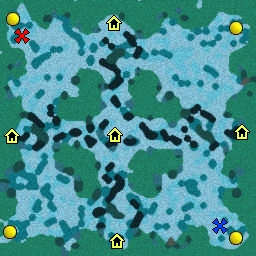 Packs 1 Maps 20 Templates 5 Tutorials 1
Well the layout of the terrain is pretty much meh, its too simple in my opinion considering that the map is also small but I'll give you props for the nice execution on the designing. I'm not really a fan of the way you brushed the tiles but I think it works well for IG tileset. Well about the gameplay I think you should still consider that there are people who prefer to creep early game but well it really just depends on the players. Oh and NE have a big problem here if their enemy attack them at the start since Wisp cannot attack. I think the item drop of the map is fine but I still prefer the more random custom item drop base on item level. Oh well its a good 3/5 for me.

Maps 4 Templates 1
Thanks for the feedback. There are only few creeps here due to this is more of a PvP melee and not creep grinding much melee and also for the terrain, on the next update I might make a terrain revamp maybe.

For the Wisp, I tested that and the creeps didnt attack the Wisp, I will have a double check.

Thanks, this is really a useful feedback!

the map is pretty good my opinion.. but the starting point is too small, you design it very well.. but it's no use if we can widened our base right?
at least you can make starting creep like usual melee map.. but you don't
the terrain is damn cool but too small
well its a good map 3/5
+REP <3

Maps 4 Templates 1
Thanks for the feedback there... for the starting point, yes its quite small but the problem is if I will make it big I will have to start a new map for that and also for the starting creep.... what do you mean? Are they too hard? If yes, just dont attack enemies from the Cells because they are all at high level and it will be a risk if you are not ready.

+4 REP for the feedback!

Oh guys, will need to spread for both of you Divine and SoJ.

Icons 1 Skins 1 Maps 2 Spells 2
yes, they're too hard for the start.. you can make starting creep with low level like usual melee map.. level 1 - 3, because your designed terrain you can't achieve that.. but i like your terrain.. like i said before

Maps 4 Templates 1
Maybe I'll do that but this is a melee that is more in PvP than creep grinding melee so there are only few creeps because this is more focused on players clashing.

But I will try my best to do that.

Icons 1 Skins 1 Maps 2 Spells 2
yeah..
it's remind me to clash for the sacred cheese!

Maps 4 Tutorials 1
Map sucks that I accidentally pressed the delete button! and -Kobas- told me in private message that he felt dizzy seeing this in the pending section, I'm sorry this is not acceptable I must reject!

lol joke, but really there are possible reasons that the map needs some excessive work:

-The map is tiny, too tiny that is isn't capable of giving space to both each players in real-time game play

-The Creep out spots is really few, plus those 4 bordered demon region is way too much just for a 1v1 melee on a tiny scale(btw in warcraft lore: the draeneis are trying to survive in the world of outland due to demons attacking them everyday so its quite odd to see a small pack of them in the realm of Azeroth, especially on wintering continents)

-The most important thing when it comes to melee, Expansion(Additional Goldmine), without it the game really must end in such a early scale.

In total, Gameplay needs to and always have to stand on their feet, Terrain layout is a good show but if this will be entertained into the melee fighting grounds, I probably guess there would be a lot of problems going on.

Sorry there mate, but this has to go down (actually :>)

For the Wisp, I tested that and the creeps didnt attack the Wisp, I will have a double check.
Click to expand...

No, I'm talking about real players harassing you right at the start. NE will stand no chance.

Maps 4 Templates 1
Thanks for that, will work on it but do you know of a way increasing the map size without having to start terraining it once again?

Oh I see... you got a point there. Will improve this guys.

Thanks for that, will work on it but do you know of a way increasing the map size without having to start terraining it once again?
Click to expand...

Start it from scratch again, that is my best suggestion. You'll gain more than you'll lose.

Maps 4 Templates 1
Yeah, I do noticed that too just now. Maybe I will make this a 4 player or 2 players with lots of creeps. So learned a new lesson today about doing melee map btw, guys I am now starting it from scratch once again and I've been succesfull on doing the form of the original map which will be now easier again to make the map.

Maps 4 Templates 1
Guys, updates! After an hour of working, this will how the map will look like in this updated one: 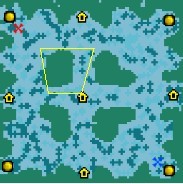 your middle doesn't looks the same.. you know what i mean right?
it's hard to describe something without your first language :\

Maps 4 Templates 1
Already filled the map with creeps, now what is left is for terraining.

Maps 4 Templates 1
Updated guys, map is now updated with the new one that is 1.1. Please tell me out and give feedbacks mostly Orcnet's

Maps 4 Templates 1
Looks like I need Orcie's Pending or Approval for the map to appear and be available. Stay there...

Maps 1 Spells 7
when will this map get approved, just a question ?

Maps 4 Templates 1
Yes, there is an older version of this and as for the suggestion, could you please elaborate more on what you mean by tile more like earth?

Yes, I do know that and he actually is too busy just now.

Icons 2 Skins 2 Tools 3 Maps 10 Spells 5 Templates 5 Tutorials 6
Few bro tips:
- Cliffs/Rivers over trees, because base should not be exposed from all sides.
- Creeps should never be placed as group of 1 (single creep), or in such huge AoE (near gold mines, reduce space between units).
- Tiles are really bad, you can see size 2 terrain pattern all over the map.
- Remove empty space between trees.
- Place Tavern on map center, or go with only 1 fountain.
- If you go with 1 fountain, guard it with red creep camp and drop artifact.
- Item drops should be random, not map maker decided.

Maps 4 Templates 1
Thanks will improve this one, maybe give me some days because I'll be busy with mid term exams.

Maps 4 Templates 1
Hmm, weird but it became like that. I dont actually know how to fix this, maybe updating it will fix it?

Hell_Master said:
Hmm, weird but it became like that. I dont actually know how to fix this, maybe updating it will fix it?
Click to expand...

Maps 4 Templates 1
Not acting like a total noob but where, could not possibly see it. And if you mean Map Settings in WE, well its already set to my name.
You must log in or register to reply here.