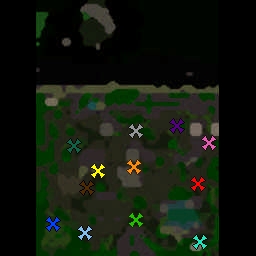 This bundle is marked as useful / simple. Simplicity is bliss, low effort and/or may contain minor bugs.
View usage Statistics Legacy download
Reactions: Vengeancekael
BE THE NEXT ONE FOR THE NEW GAME EXPERIENCE !


Here is a short Alpha Video:


As you can see here in this Video there is the "short" Gameplay of this Video. (In my next Video i will show you how to play)

Hero Introduction
Shadow Fiend's only defense lies in his superb offense. After each life he takes, he traps their soul to empower his attack damage with Necromastery. This allows him to amass high attack damage. His ultimate Requiem of Souls can summon these souls out to inflict great damage and slow anyone close to Nevermore. His unique Shadowraze allows him to blast opponents in small areas, at three separate distances. The Presence of the Dark Lord also makes enemies vulnerable to physical damage, passively reducing their armor. Deadly from a number of distances, and vulnerable if caught off guard, Nevermore's positioning in battle is of utmost importance.


Background Story
A demon of the burning legion so abhorred that he makes the skin of even his fellow demons crawl, Nevermore is a creature of the shadows that consumes the souls of those around him. When the Shadow Fiend comes forth to battle, he augments his power with the souls he has consumed, bearing down on his enemies with spiritually enhanced attacks and powerful spiritual blasts. The Shadow Fiend is a terrifying opponent whom few have survived, and those who have perished under his tyranny have faced the most despicable fate of all.

Gives the Shadow Fiend the power to desecrate regions in front of him at varying distances.

Summons evil spirits around you dealing damage to units in the area. Number of spirits is related to the number of souls stored and the movement/damage reduction is related to the distance from the Shadow Fiend. Lowers movement speed and damage of nearby units. The closer the units are the greater the effect.

Ability Type: Active
Targeting Type: Instant
Ability Hotkey: R
Summons evil spirits around you dealing damage to units in the area. Number of spirits is related to the number of souls stored and the movement/damage reduction is related to the distance from the Shadow Fiend. Lowers movement speed and damage of nearby units. The closer the units are the greater the effect.

This is not my own Text. This text comes from http://www.playdota.com/heroes/shadow-fiend

Its an Alpha Version because I need some help with the triggers and i did a forum about it -> http://www.hiveworkshop.com/forums/project-recruitment-256/searching-some-mappers-209349/ but i couldn't find some members so i started to make it public for testing.
In this map you can just play 1 Mode. Its FFA. - You can set up how many kills will need to win the game.
In the first text you already read how to play this game. You got 3 Custom and 1 Ultimate Spell. You need to kill the enemy with your Spells.
Included 11 Items and 6 Spell Power-ups.
8 Different Runes: Reveal, Invisbility, Refresh, Thundergod Wraths, Stun, Gold, Healing, Haste
Kill Steak with Sounds: Firstblood, Double Kill, Tripel Kill, Ultra Kill, Rampage, Killing Spree, Dominating, Mega Kill, Monster Kill, Unstoppable, Wickedsick, Godlike, Beyonde Godlike!
No Minimap ! This Map is totally skill based. There are no Items with damage or anythingelse.
There are no Cheats !
Multiboard with Kills and Deaths.
-stats and -ms enable.

MAP CREATED BY THENIGHTWALKER.
THIS MAP IS PROTECTED !

This is still an alpha version of this Map. I need some help with triggers. If you want to help me please contact me ! Write PM or write a comment ! Thanks

Map Info View Resources In Use Download
Reviews
Vengeancekael: Private Message Date: 2012/Feb/03 22:03:35 Reasons: Missing custom preview image: To add a preview image, resize the image to 256x256 or 128x128 using gimp and save it as .tga. Import the image and change its path to...
Read full review...

Reasons:
Missing custom preview image: To add a preview image, resize the image to 256x256 or 128x128 using gimp and save it as .tga. Import the image and change its path to 'war3mapPreview.tga'.
Work in progress maps are not allowed in the maps section. Only BETA (Playable) and full versions.

To tell i didnt played with players so i can tell what i can with singleplayer:

Terrain - hmm you still need improvement in the terrain you should add more brushes at right place you put all brushes in one place its not very good. so ill give 3/5 here

Suggestion: You should make Ai playable,add the brushes into the right place not all on one place.Also put more items in the game.

Improve the description and change the pictures because im not seeing them.

Maps 1
Ok thanks for the Information, this helped me . I need some help. I don't know if people like this, or don't like the items,game bugged or terrain is bad.

Tools 1 Maps 13 Spells 1 StarCraft II Resources 1
A preview image would be nice <3
Also the images are gone, I suggest not to use a temporary image storage website. How about uploading them in an album on the hiveworkshop?
Also shorten the huge amount of text in the description.
And don't forget to mention in the description that the map is protected!
Also shorten the map's file name, or it won't show up in the maps list!

Well first thing, the mode 'Team' is missing even though the host is asked to choose between FFA and team.
You've made custom items with really neat and short tooltips, also recipe items!
Custom icons have also been used!
The map's idea is way too simple, you basically play the Shadowraze hero and basically have to kill the other players using his skills and the random runes around the map.
That idea has been done a hundred times before.
The terrain is also a bit chaotic, the bushes don't really fit the thick and green grass tile, you've only used blizzard cliffs, not heights, no custom models whatsoever and no fog.
You need to implement a more interesting and maybe complex feature into the map for it get to fun and special.


Other:
*A loading screen would be nice
*Colorize the map's title in the editor (Map Description) [Tool]
*Improve the map description (Not on the hiveworkshop, but ingame, the loading screen text and the lobby description -> Tell us about the map, not the latest changes
*There's a typo in the item 'Precision Razes' title
*Remove the 'Kill X' leaderboard -> A game message in the beginning will do
*Remove missing players from the scoreboard

(even though I'm not a mod, I just felt like using that image)

Icons 2 Skins 2 Tools 3 Maps 10 Spells 5 Templates 5 Tutorials 7
Did this map made any progress?

sorry for this big delay. Well Im working on it. Don't worry but im also working on 1 other project with my friend. We are working on a ORPG ! The next time we will post it on Hiveworkshop and we will give you some information about the ORPG. But im still on it. I worked already on the map and the beta can come soon...ish xd !
You must log in or register to reply here.

[Picture] Nevermore dota 2 fsjal made by me ^_^