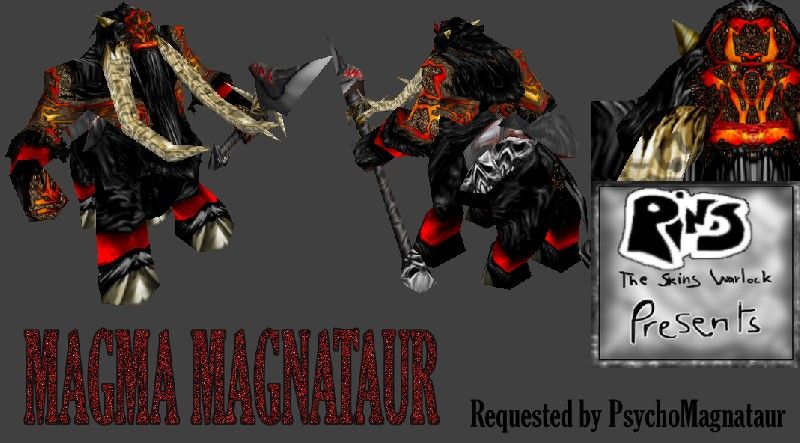 This bundle is marked as approved. It works and satisfies the submission rules.
View usage Statistics
MAGMA MAGNATAUR

Use the same technic than my Magma Diver. Hope U'll enjoy !
Plz give credits...
(skin asked by PsychoMagnataur. I know I musn't do request until my next holidays, one week and a half, but I was very interested in this one).

I wait ur comments !!!
Contents

Models 29 Icons 1 Skins 7
Not your best work. Are the Lava cracks a gradient? And how do you make the gold effect? Try something new.

not bad... like your lava, always seems to look good.
I am, however, not so keen on the rock parts... they
look too "busy" if you know what I mean, too pixely.
also the rock isn't shaded properly...

small gripes but just being honest and giving my
opinion.

Dude, i love it!
Thanks a lot for doing the request early! Very cool

I call it the Magmataur! :twisted:

Magma and Magna are so close and Magmataur sounds better...

your geting better and better pins, this 1 by far is your best.

your geting better and better pins, this 1 by far is your best.

Skins 2
if anyone opens the default skin and compare it with pins's one, it looks very drastic.

right..good job on butchering this skin.
3/4 of the skin is a recolor, you desatured/darkened a lot a lot of parts, mainly his fur. on his white horns, you made a new layer, made some symbols with a big black pen and lowered the opacity. on his face and on his body, where there was skin, you applied a fugly filter like you usualy do. the only bits of freehand you did are the lava cracks and a small part of his blade. on his blade, you did a grey shape, added black contours, and did a lame blurry shading that doesnt look like anything. his golden horn with the stitches looks like a golden filter or a weird pencil job with few dodged lines. the lava on his face looks remotly like lava, good job on that, but on his whole torso, it looks like nothing like lava, on half of his torso its yellow, and the other is redish. seriously, stop doing those recolors/filters, its even worse than a cnping.

By the way, fix your stupid avatar, it looks really retarded and pisses me off!!
Since you like being a critic, i'm going to try it
first of all, that guy looks like he got nailed with a baseball bat a few times. that ugly thing that you call a woman must have been dead for at least 3 years now before baseballbatface dug her up and made out with her. mr.stupid's nose comes down too far (usually noses are lowest where they attach at the face) and his ear is just a line, with no detail. it looks like crypt-monster (the female) got her head burned off cause the only hair she has is POORLY drawn and sparse. also, it looks like that dudes neck is dying or something.

this was just an example of what you do to other people. thought I respect your ability, that doesn't mean that you are superior to everyone else and that doesn't give you the right to be a jerk. and what you call being a critic is just being a retard, it makes you look stupid.

Models 5 Icons 17 Skins 81
Wormskull, are u paranoiac (not offense) ? I've noticed u try to see filters everywhere, don't worry they wouldn't invade the free world.
And, as ur habit, u again wrong, no filters and only freehand.

hey, im new and i love ur skins. but for wutever reason, wen i imported it to my map and restarted it, its all black with bands of the team color. if u culd help, it wuld b great. keep the good skins coming tho.

Models 18 Icons 110 Packs 3 Skins 11 Tutorials 4
well if you didnt use filters then you obviouslt have abused the brush tool and thats what makes this skin crap.

its all black with bands of the team color
Click to expand...

I got the same problem too! How can I fix it?
You must log in or register to reply here.