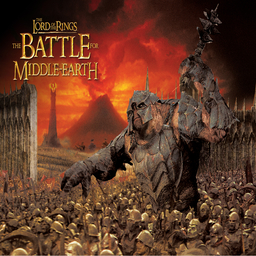 This Map Does Not Have AI, I do not know how to create AI.

-I created a Lotr Builder a few months back and uploaded it the Hive, but after a while I realized it wasn't the map I was trying to make and that I could do a lot better. What I have made here has taken the skeleton of my old game and entirely fleshed it out with a new terrain that no longer utilizes blizzard cliffs, a region capture system, a new system for obtaining lumber, a new unit counter system which is more advanced than my previous rock paper scissors version, and an overall game play that eliminates bunkering and forces expansion and conflict.

-Lord of the Rings Battle Conquest is a game where you choose a base and a race and then expand your empire by capturing regions (Outposts). You must be clever to defeat your enemy by using a wide variety of weaponry, units, and abilities throughout a strategic terrain layout.

A.) Unique Bases: Each base comes with a passive ability that can effect the way you play the game.

3.) Belfalas: Friendly units near or within Belfalas regenerate 5 hit points per second.


1.) Build Plots: Each outpost comes with at least 2 build plots allowing you to create more structures.

3.) Forward Base: Outposts allow you to create barracks and siege works closer to your enemy.


C.) Build Plot System: All structures are built on Build Plots which affects the gameplay in several ways.


1.) Eliminates Bunkering: Players cannot bunker in bases because they can only build a certain amount of structures within their base. Bases have between 6 and 8 Build Plots.

3.) Encourages Raiding: Players will know where Outposts are and they will send units to try take them from you.


1.) Gold: Obtained through building income structures (Farms, Slaughterhouses, Mine-shafts, War Tents). Each building produces 15 gold every 5 seconds. They will not produce gold until they are finished constructing.

3.) Trade Caravans: Are trained at outposts and produce War Supplies by patrolling between the Outpost and a nearby Trading Post.

4.) Upkeep: The more food you take up the higher your upkeep, causing your income structures to produce less gold.


C.) Elite Units: Are costly and limited, but can be vital in winning a battle. 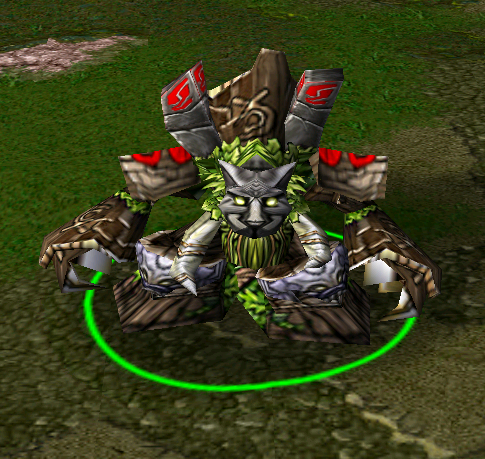 2.) Sindarin Ranger (Elves): A long ranged archer that becomes invisible when next to trees. Remains invisible while attacking. 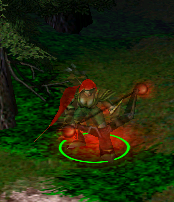 3.) Mamukil (Haradrim): At full mana, the Mamukil can Rampage to a target location, killing all non-hero, non-elite units in its path (including your own units). 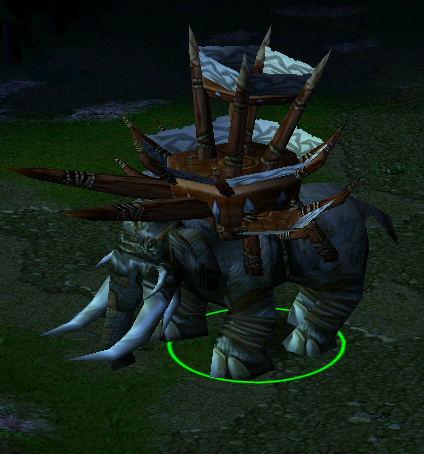 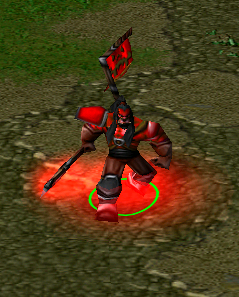 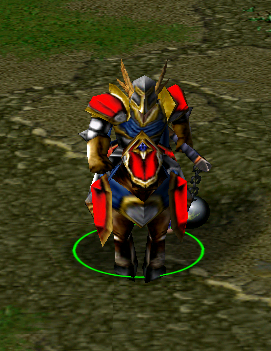 6.) War Troll (Mordor): Can pick up a nearby friendly unit and either throw it at location, dealing damage and stunning units in an area, or eat it, restoring a percentage of the Troll's health. Has taunt and gains armor when killing enemy units. 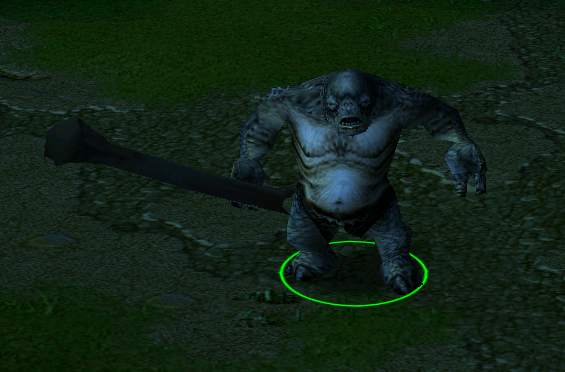 7.) Grond (Mordor): The most powerful siege weapon in the game, destroys gates rapidly and has very high hit points and defense. 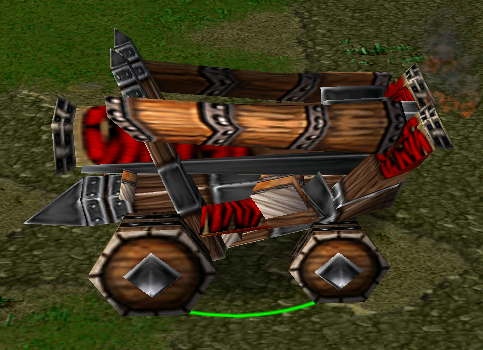 8.) Shield Breaker (Dwarves): When standing near other Shield Breakers, the Shield Breaker gains a resistance to Archer type damage. Can capture enemy towers. Has a secondary siege attack, making it an excellent unit for breaking through enemy defenses. 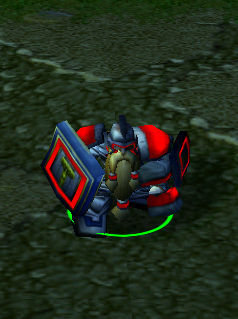 Each race has a unique Elite Siege Unit with a special form of attack.


1.) Hotkeys: They have been simplified to eliminate random hard to remember letters. 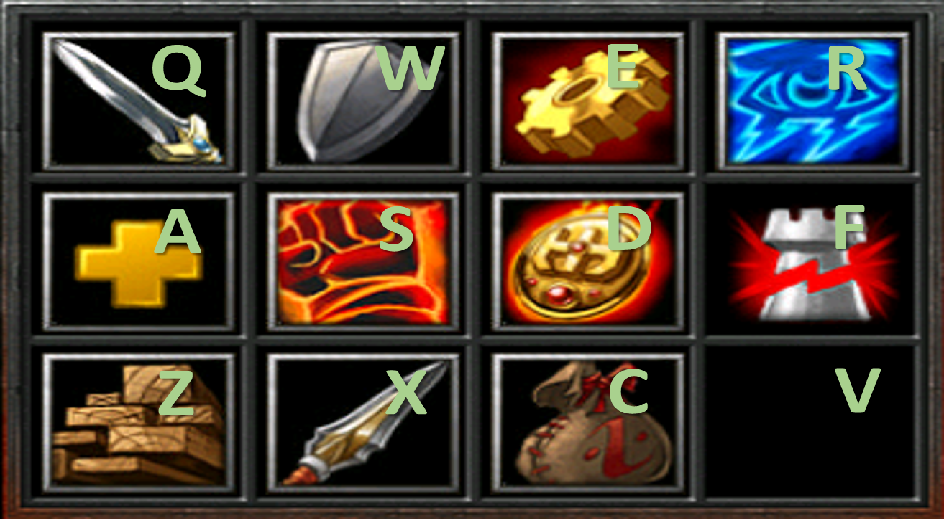 2.) Tooltips: I made sure all tooltips explain exactly what the unit or ability does and they are all grammatically correct. 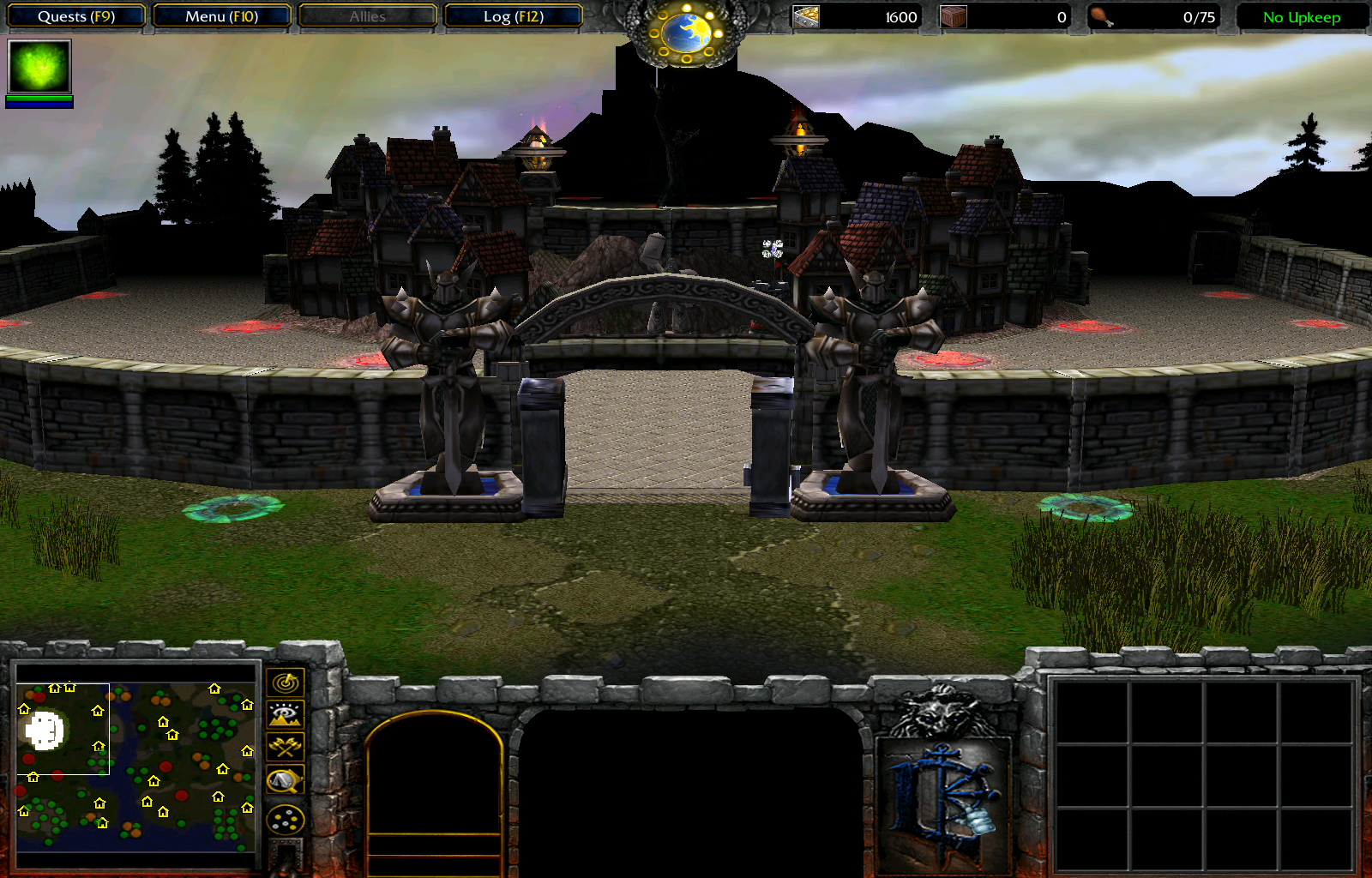 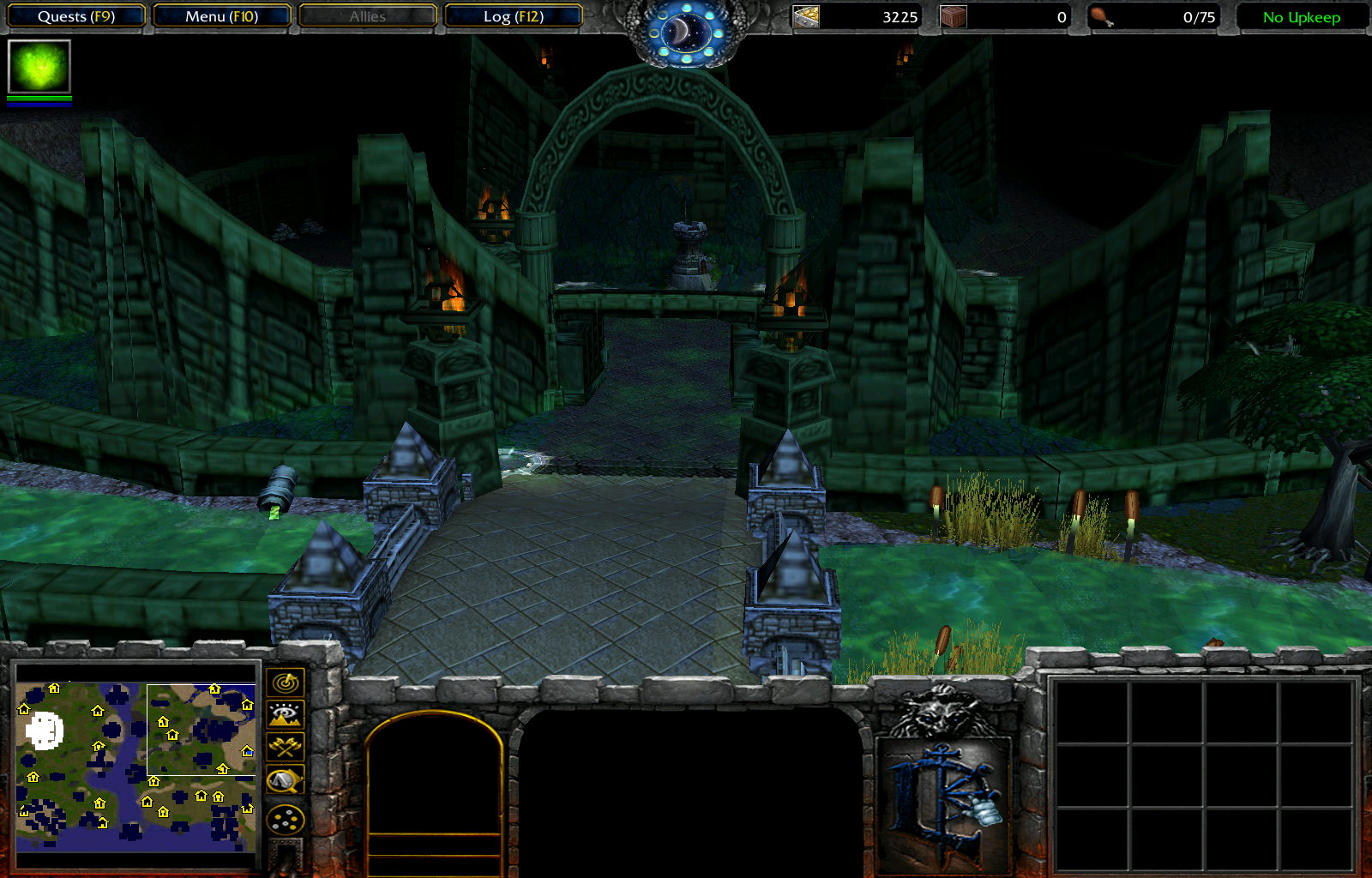 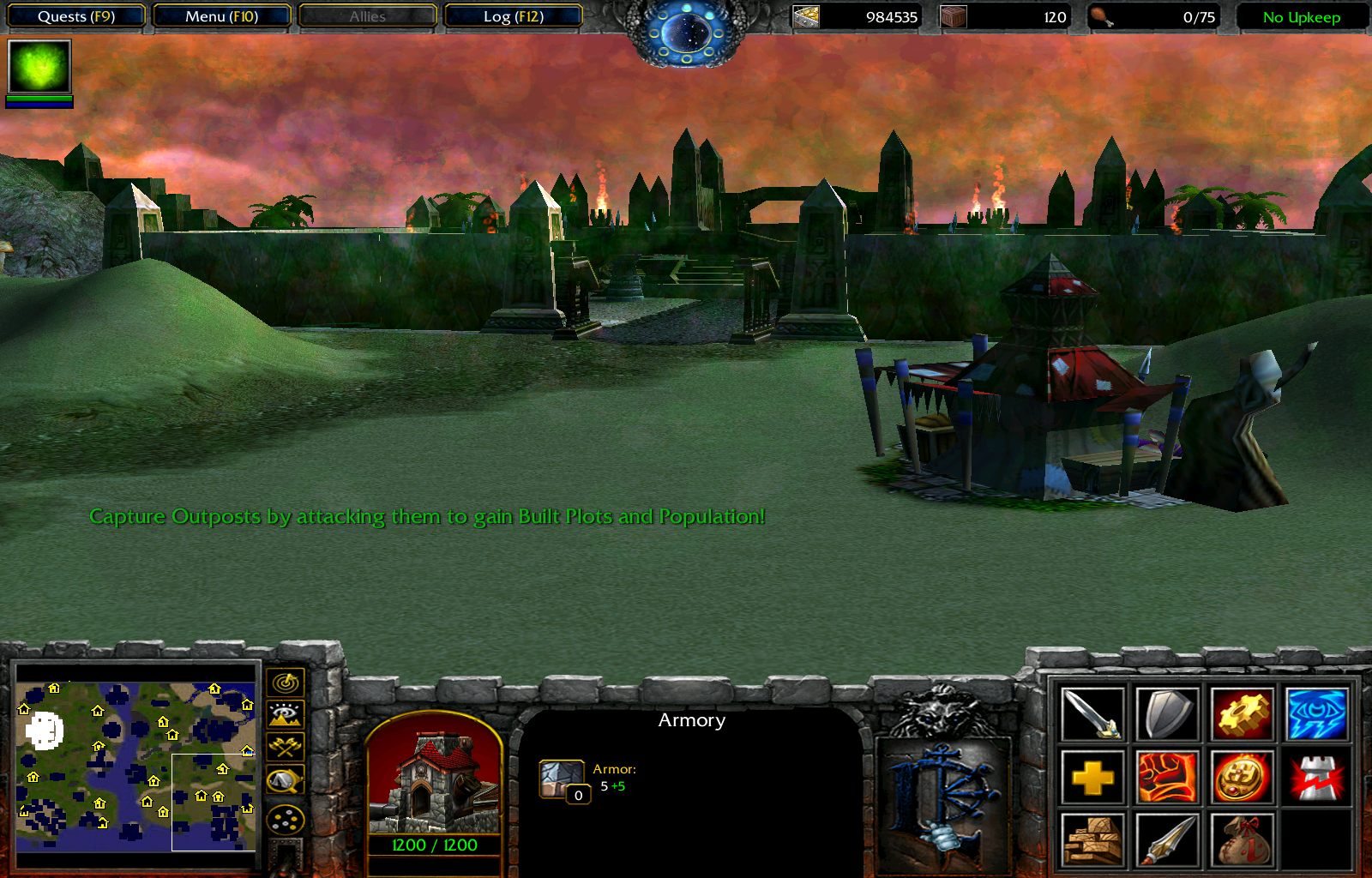 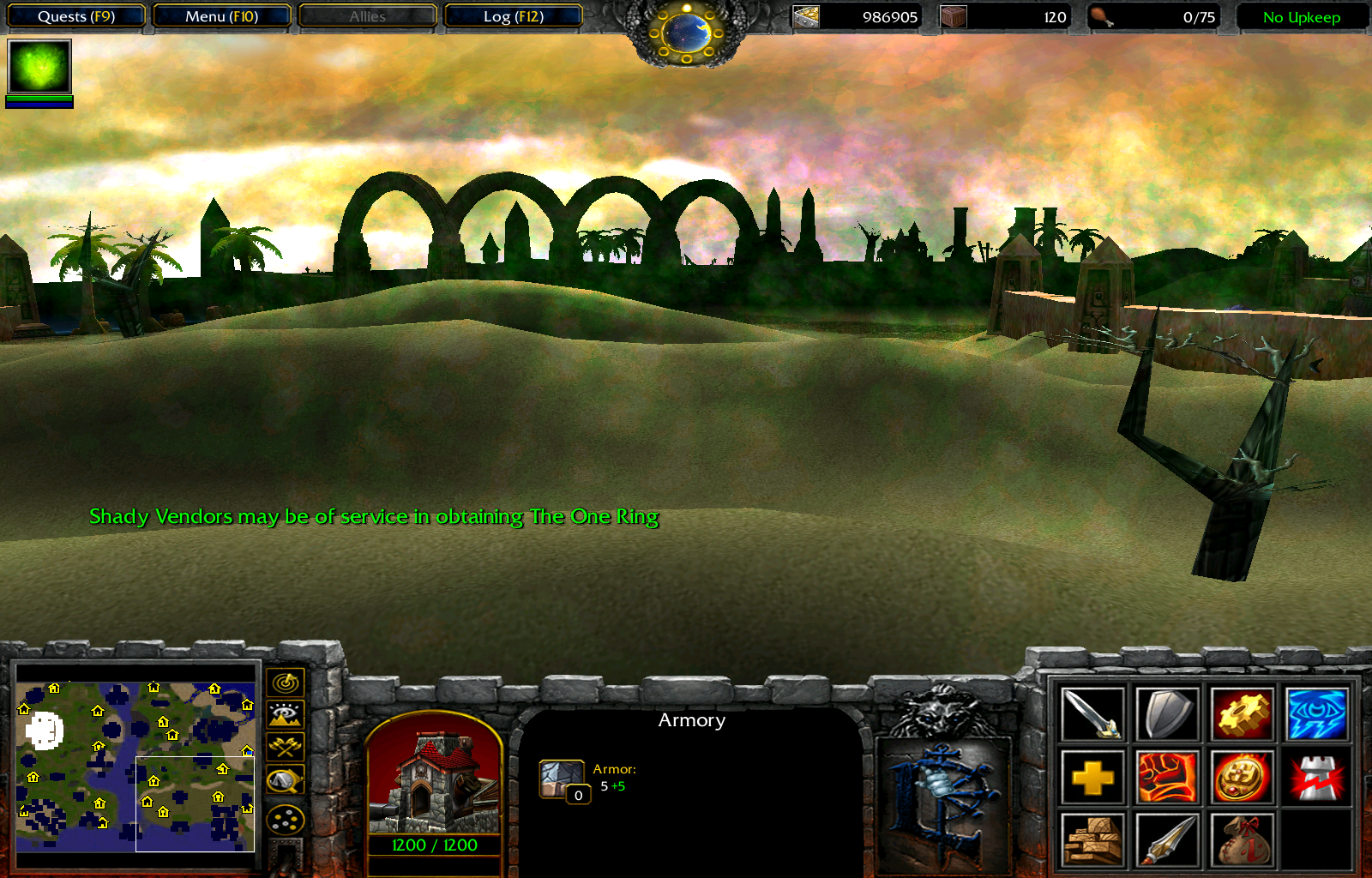 Image Description:
Past Minas Morgul runs a river made vile with the filth from the evil fortress 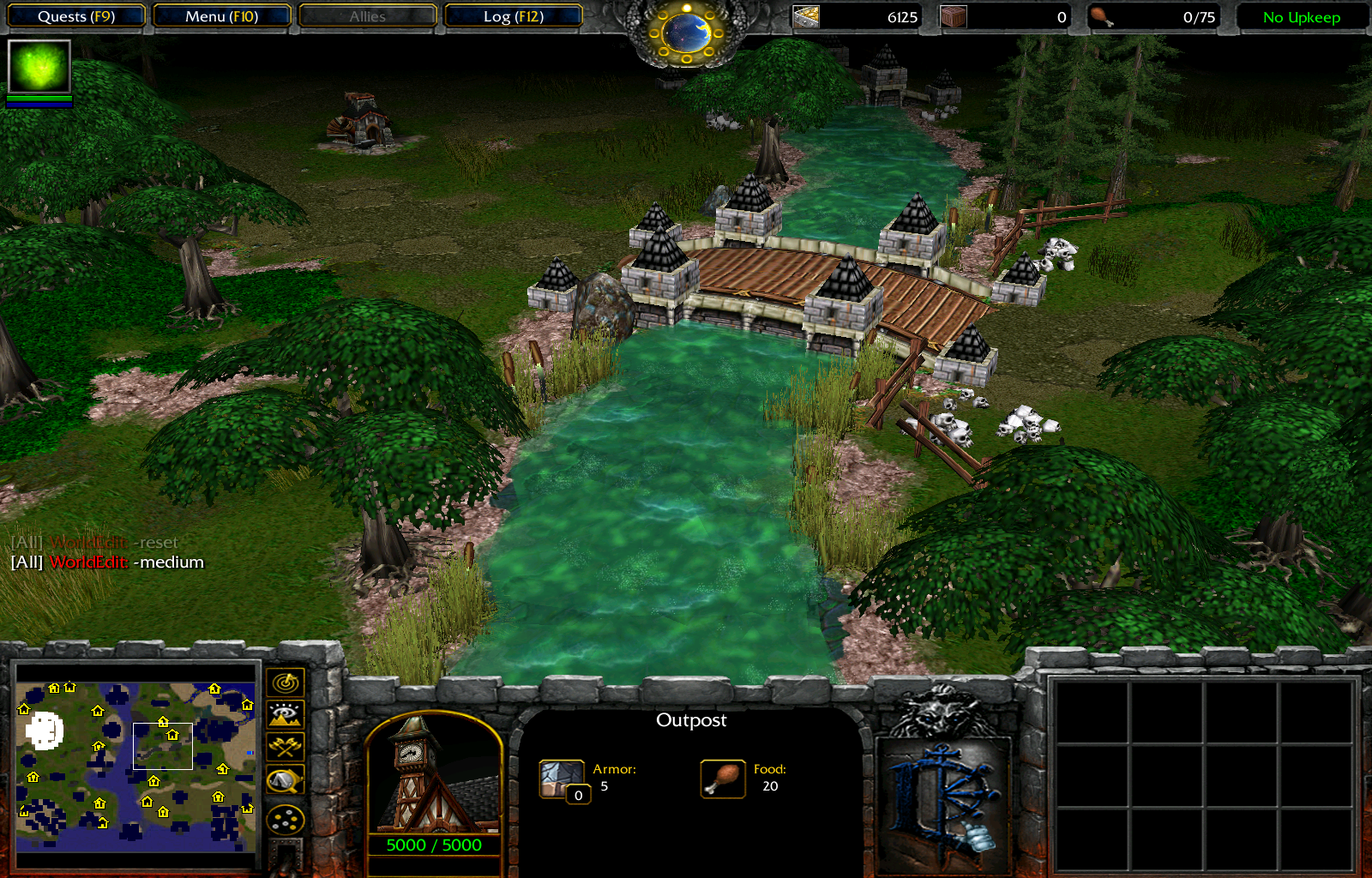 Image Description:
This port near Belfalas can be captured to produce ships Image Description:
This Outpost was captured by bringing its hit points down to 2000, Enemy structures were immediately removed Image Description:
These Caravans were trained at an Outpost. When trained they automatically patrol to the nearest Trade Post and produce lumber when they return 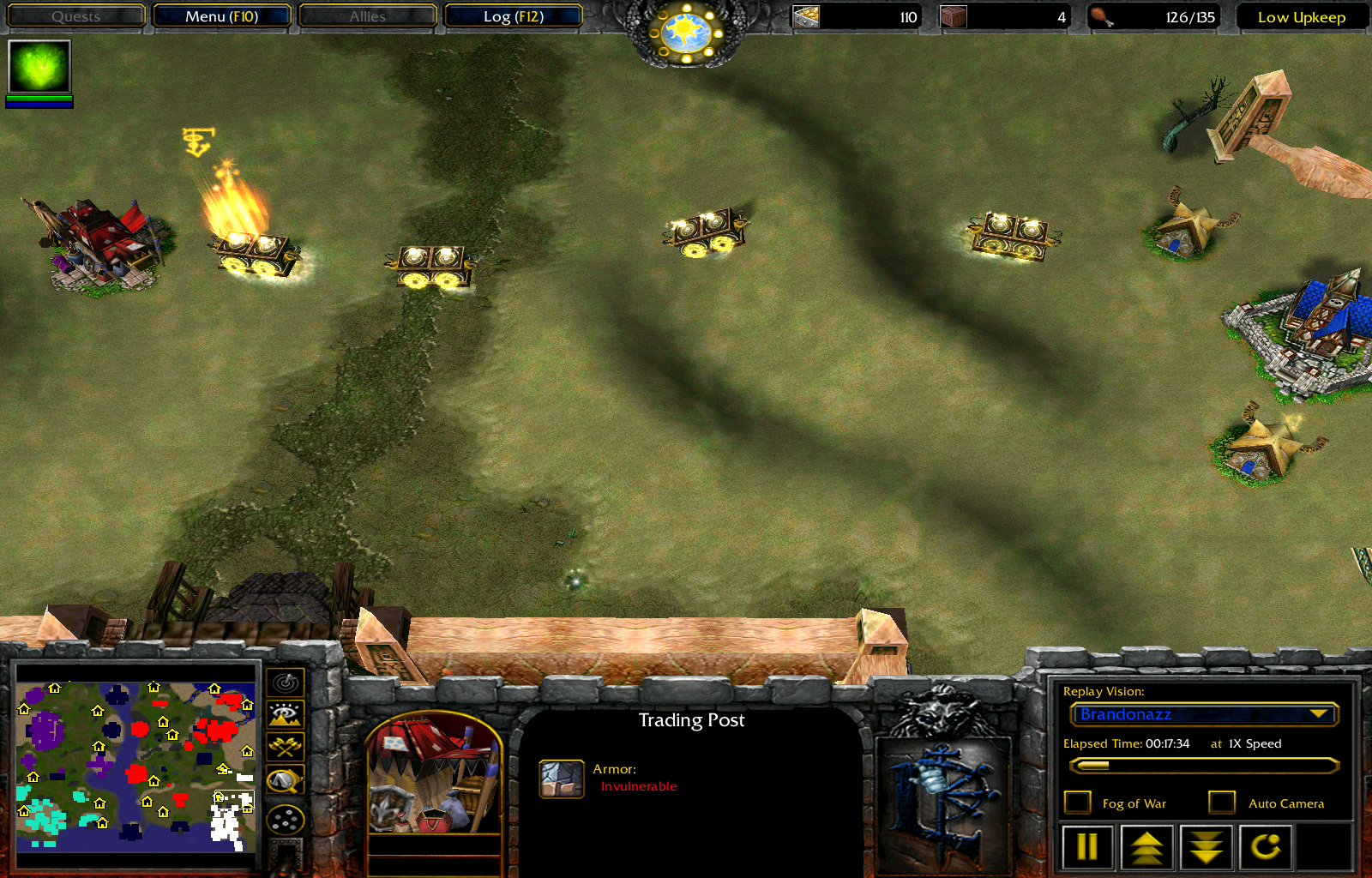 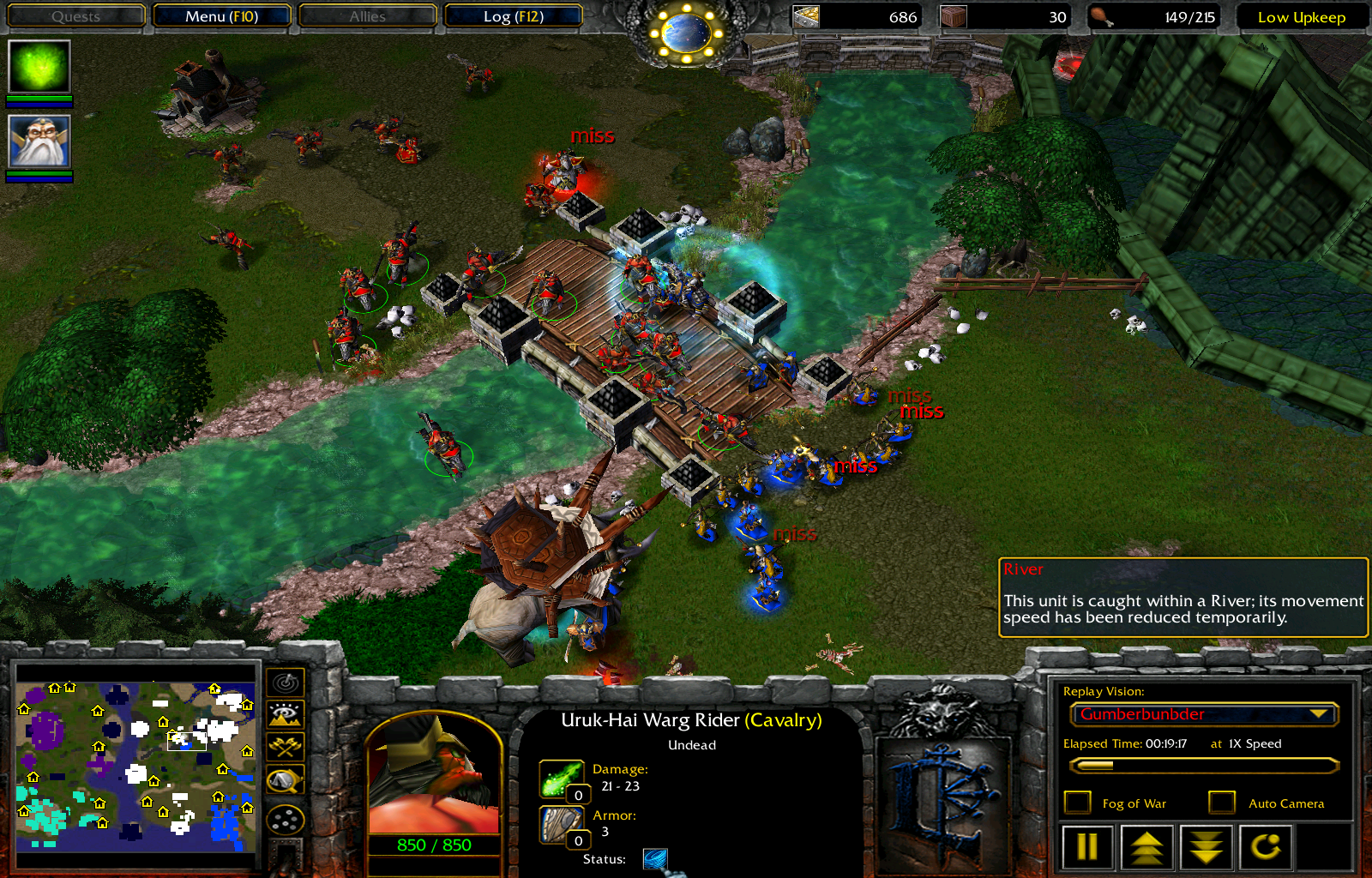 Image Description:
Elves and Uruk-Hai battle for control over this Outpost 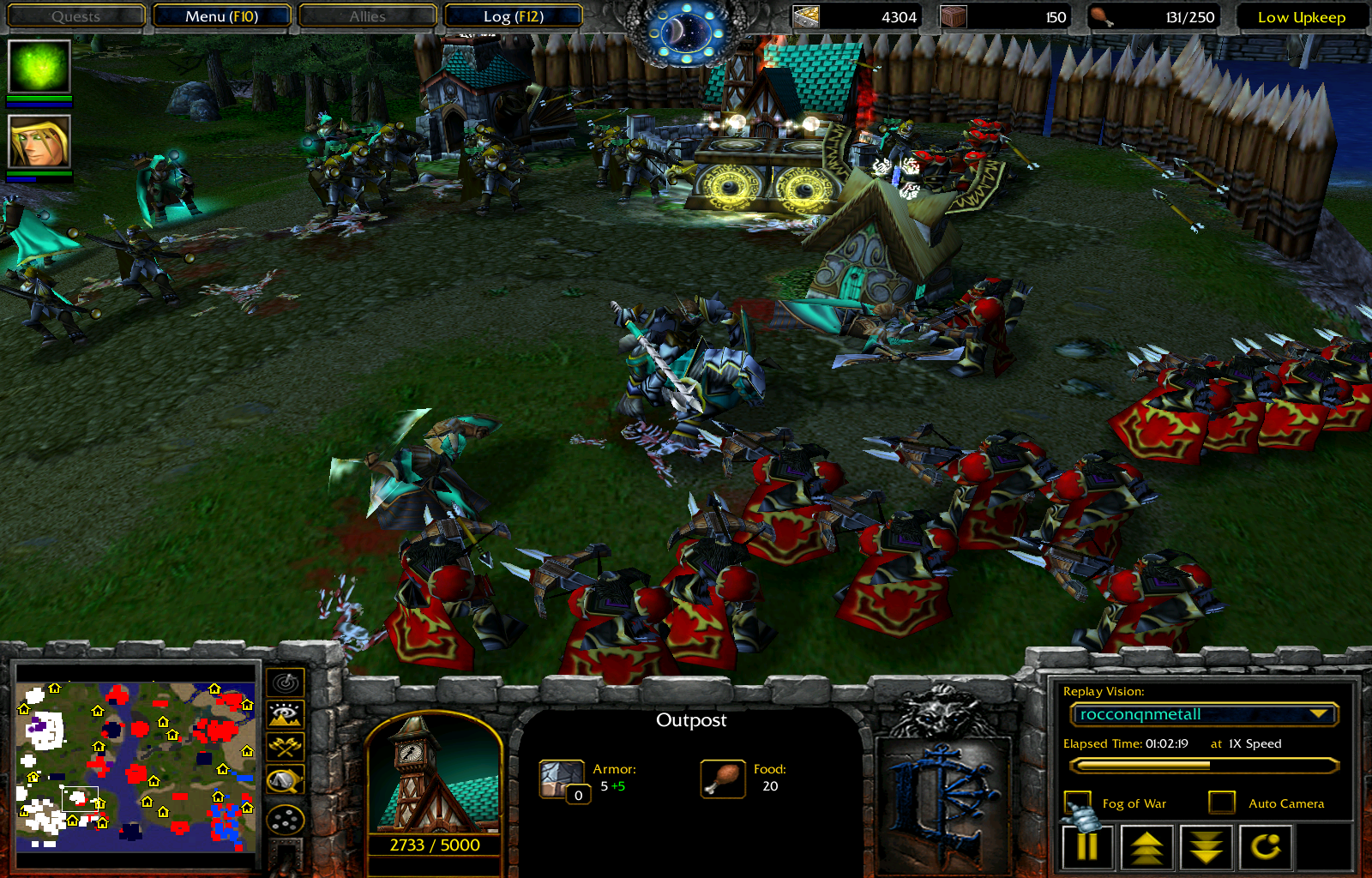 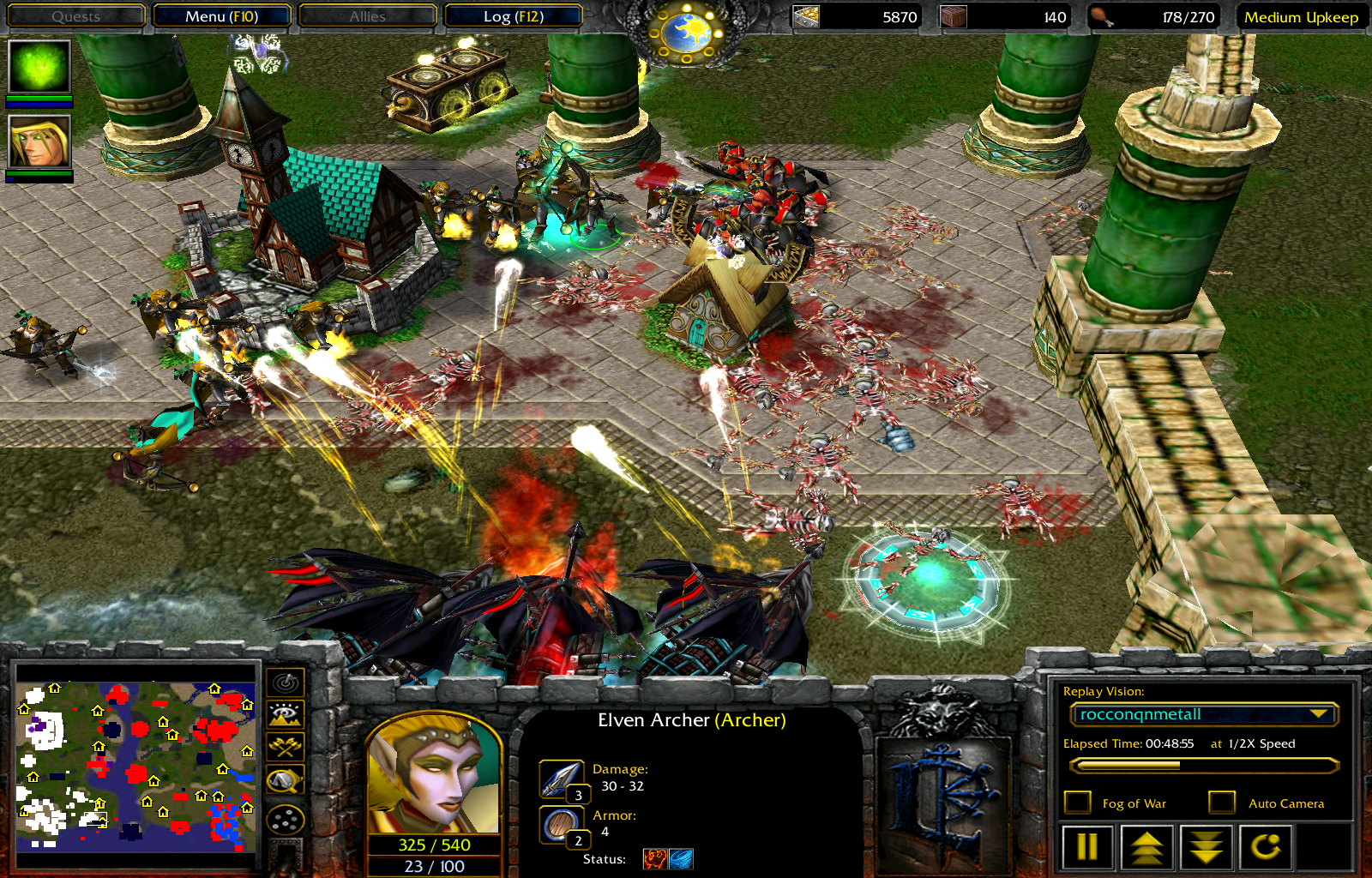 
First Posted to the Hive

I host this game fairly often, my battlenet name is Gumberbunbder and I'm on east, PM if you want to play and i'll host it

Here's a preview of what I'll be adding soon! 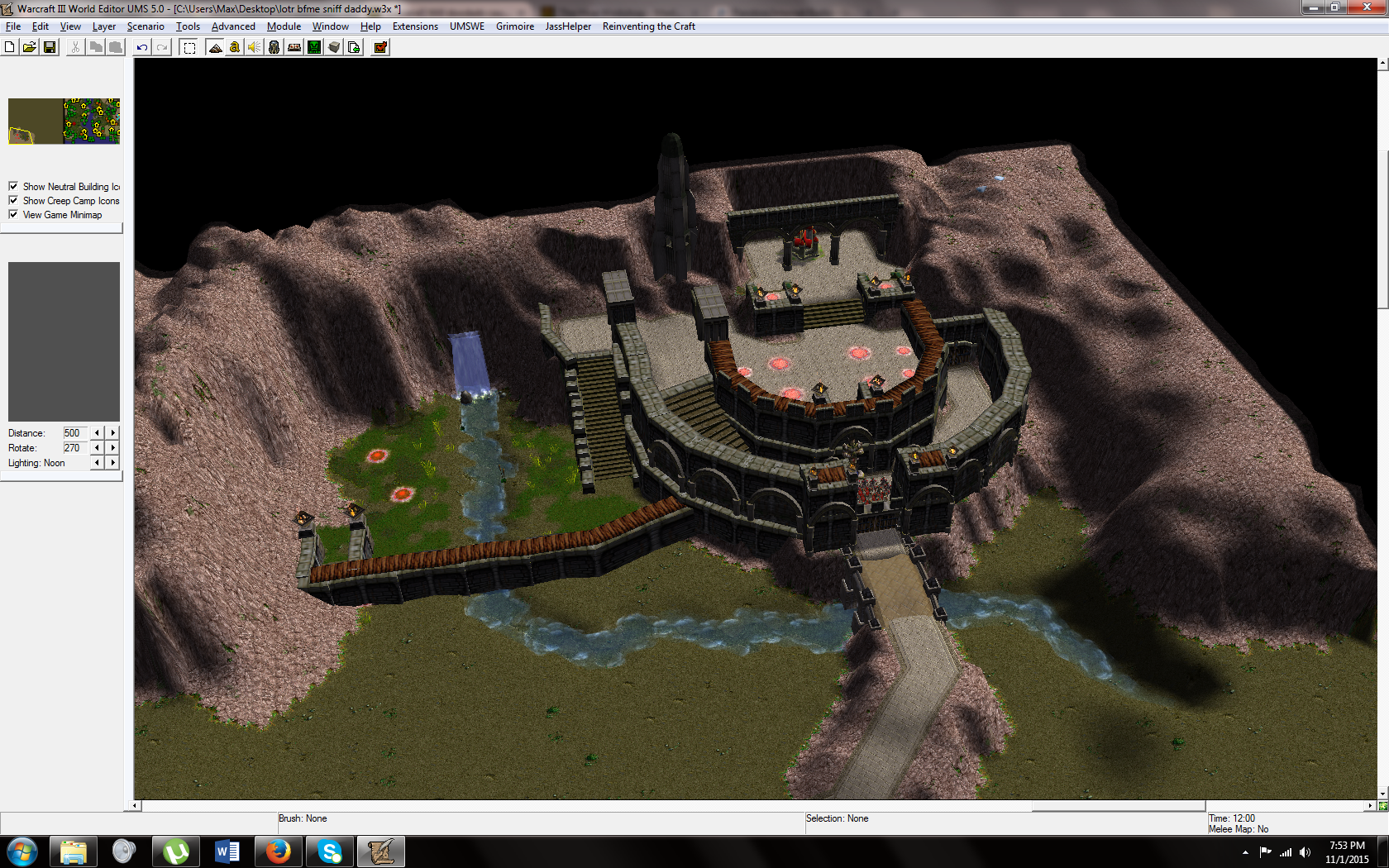 Map Info View Resources In Use Preview Triggers
Reviews
17:48, 31st Dec 2015 StoPCampinGn00b: We decided in game that it'd be best to set this to needs fix while a map development thread springs up :)
Read full review...

17:48, 31st Dec 2015
StoPCampinGn00b: We decided in game that it'd be best to set this to needs fix while a map development thread springs up

how do you even play the game it wont let me start it because every one is on the same team
Click to expand...

There isn't AI so the other players aren't going to do anything. Also, you should be able to start the game, the players are all under the same force on the lobby screen but they aren't allied.

Ill be hosting this game today and tomorrow. Send me a message when you are on if you ant to play and I'll tell you the game name

Maps 1 Templates 1
I have a suggestion, make heroe trainable in the main base building, there few of buildable points , and units training is too slow ....

im not trying to play with ai im trying to play this with my little bro over network and it wont let me start the game cuz every one is on the same side.

LightMareGodRex said:
im not trying to play with ai im trying to play this with my little bro over network and it wont let me start the game cuz every one is on the same side.
Click to expand...

Okay, i get it. I think LAN works differently than battlenet. Im reuploading a version with 2 forces. I think that will make it work, tell me how it goes. Thanks

works good now thanks for the fix

Maps 1 Templates 1
Like this game has new version ! Will test it later and tell you what I think.

I have a problem cant find the map on mmh ... have you added it already?
Also Lotr bfme is the name of another famous wc3 lotr map ... dont you think its better to change the name_? maybe Lotr conquest ?

Valandil said:
Also Lotr bfme is the name of another famous wc3 lotr map ... dont you think its better to change the name_? maybe Lotr conquest ?
Click to expand...

I Didn't realize there was a famous Battle for Middle Earth map already, I'll check it out. I guess i'll change the name so as not to confuse people, good idea
If u want to test it with me Send me a message sometime today

Edit: I have the map uploaded on Entgaming.net its called Lotr Bfme v1.1 but I'm going to try and get it uploaded to MMH today
You must log in or register to reply here.