Life of a Peasant - Parvenu 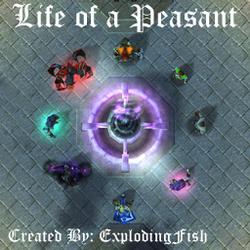 Tags:
Life of a Peasant / LOAP

Created by: ExplodingFish
Life of a Peasant - Parvenu

Life of a Peasant - Parvenu is a heavily modified Life of a Peasant map. To put this into an understandable perspective, the map is packed with an astounding 1,027 triggers, 197 variables, and 457 regions. I have designed this map and balanced it to the best of my ability to make sure it is competitive and fun, without seeming unfair.

Features:
Life of a Peasant - Parvenu prevents players from rushing to powerful job positions. Instead, players must work up the job ladder, and must increase their hero's attributes to unlock the best jobs available.
To prevent early "griefing", a neutral Police Force safeguards the map from any kind of abuse. If a player feels distressed, they may run to a nearby officer for protection. This Police Force works based on a Five Strike System, and repeat offenders will be forced to endure a 30 second penalty. If a player refuses jail time, the Police Force will stay unallied to the player.

The upgraded School System cannot be abused, and is not a game of grabbing intelligence tomes. If you are in the school building during the correct hours, intelligence will be automatically rewarded to you, and everybody else in the building. If you feel the school does not offer you intelligence at a fast enough rate, you can visit the College. The College allows you to pay for the amount of intelligence, and agility, you receive through specialized courses. The best courses have high prerequisites.
The Church Marriage System has been revamped, and gives any marrying couple an ability and a ring symbolizing their marriage. If any couple wishes to divorce, they need only drop their rings from their inventories.
The Player Police Job can no longer be abused to the extent it was in different versions of this map. If the player commanding the Police Job wishes to arrest a hero, the hero must have committed some sort of felony.

Felonies Include
- Killing another hero.
- Killing a neutral peasant.
- Not paying hospital bills.
- Robbing the bank.

The more felonies committed by a hero, the larger the bonus the Police receive for arresting and jailing him or her. Arrested heroes must be placed in a jail cell within a two minute timer, or the prison van will be destroyed. Along with this, the arrested hero will be free to go. Jailed heroes will be released after a certain period of time, automatically, pertaining to the severity of their felonies.


Screenshots.
Screenshot: The starting location in the map.

Screenshot: The neutral Police Force in action, retaliating against an angry peasant.

Screenshot: Players must meet the requirements of a job to be employed.

Screenshot: Players are able to take control points, which offer a +2 income bonus and +10 food bonus.

Screenshot: Stay vigilant, and do not let other players steal your gold.

Screenshot: Jobs such as the Drug Barn, Mafia, and Police come with special units.

Screenshot: Players receive control of these units upon acquiring the job.

Screenshot: These units are capable of carrying out special functions.

Updates.
Version 1.09: Shops now close at their designated hours. Shops are hidden during their closed hours, and re-appear the morning after. A large number of bugs have been fixed. The bank gives more interest in deposited savings, but is now easier to rob. Jobs such as the Police, Mafia, and Drug Barn can no longer be abused; the jobs, when quit, will hide the job-only units. The Battlegrounds is now open, but is currently lacking items to make use of the battle points currency; this will be fixed in the next update. Added a new house to the market. House guards have been buffed, but cannot leave their house of origin. They may be sold for extra gold if they are of no use to you anymore.
Version 1.10: The game is now considered a beta. The school has been fixed, opening every single day of the week; this has been changed due to a "days of the week" system bug. Added an 'afk' system, allowing players to check who is 'afk' after thirty seconds. Added a system allowing you to choose which statistics you want to increase after leveling up with your hero. Added an item stacking system, which was not created by me. I have added the author of the system to the credits, and the system only works for potions so far. Added item rewards for the Battlegrounds, but it is currently bugging, so it cannot be used as of now. I will try to fix this by the next update.
Version 1.11: The revival system has been fixed. Players simply need to revive their hero from a Resurrection Stone in the hospital. Revival bills are still in play here. The Neutral Police force has been given a minor buff. The battlegrounds system works full, yet is not fully done. Revamped the college system; it is still experiencing very small bugs. These should be fixed in the next update. Players can only hold one gun. The "steal gold" ability was patched to work with the "Badge of Security".
Version 1.12 Many bugs have been fixed with the Battleground System. I have added a loading screen; it is not very high quality because I want to keep this map a low file-size. I added a Player vs. Player arena, allowing players to duel one another. The winner of the PvP is displayed to all players at the end of a match. The map is now slightly more festive. Couples can now marry regardless of chosen sex. Multiple minor bug fixes.

Reminder: This map is protected.