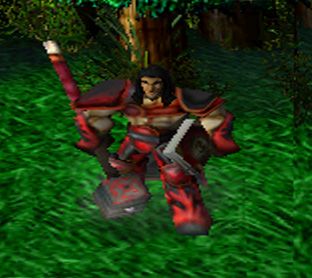 This bundle is marked as useful / simple. Simplicity is bliss, low effort and/or may contain minor bugs.
View usage Statistics
Allright... after my first phail skins i've come up with something abit better.
Atleast the comment's i've gotten so far have been telling me that it's and improvement.
It's a Arthas skin, if you haven't noticed, and it took quite a while to make.
Sorry if this thing ALSO sucks, cause i'm not sure i'm fit for judging on that.

Changelog:
Edit 4:
I've added new texture to some of the armor, fixed the cloak, changed the lighting outside his eyes so it looks like i originally wanted it and i've done abit of shading.
Also fixed hair.

Edit 5:
Changed flame on cape, made the skin color on the face match the chest and used the sharpen tool on armor.

Edit 8:
Changed shading, tried to remove plastic look, changed cape,
made the lines around the muscles more "crispy", if i understood that word right and removed the red stuff that everyone else thinks is supposed to be blood from the hammer and added some red runes instead.
I'm still having problems with team color though, since i'm using Photoshop Elements (not for long though!) and i can't find the "channels" tool which you use for alpha skinning.
If there's any OTHER way to remove team color, i'd be happy to know.
Thanks for the feedback mods!

View in 3D
Reviews
12:47, 19th Mar 2010 67chrome: The freehand work done on this seems lacking, right now it seems more like plastic due to how you shaded it. Surround the portion of the skin you are working on in a selection so you don't have to worry about coloring...
Read full review...

12:47, 19th Mar 2010
67chrome: The freehand work done on this seems lacking, right now it seems more like plastic due to how you shaded it. Surround the portion of the skin you are working on in a selection so you don't have to worry about coloring outside the lines, and shade the skin based on how the light is hitting it rather than placing the highlights in the direct center of the piece you are shading. (the top of the chest looks a little weird due to this). I like the chest, though it seems a little fuzzy - the edges of the muscles should have a crisper line then they do now.

The pink armor is really adding to the plastic feel, if you are going for red make red the highlights, and just make the shading darker shades of red. If you are going red make it more saturated to, pastel red that gets lighter=pink. The red on the hammer is particularly out of place, blood is a totally saturated bright red, and if it gets on anything typically a much darker red. Blood also doesn't power on things and gradually fade out from were it comes into contact with things, there is a definite line were the splatters are and were they end. If blood is smeared you can see the streaks.

The flames on the cape look to 3-dimensional, considering capes should have flatter decals I'd recommend changing the design, perhaps to something that could tie this skin into a judge theme. If your having trouble with team color check out tutorials involving alpha channels, they are the key to manipulating team color (as well as transparency).

Anyways, this skin is a good start but it still needs a lot more work.

11:28, 2nd Apr 2010
67chrome: You might want to check out the skinning tutorials for tips on how to make this skin better, the only change I can really see from the previous version is the new insignia on the cape, which still seems out of place. Try making it with crisper edges, and more monochromatic. The skinning tutorials on this site are located under the 2D art section of the tutorials, which can be accessed via the button on the top of this website.

Looks realy nice. But it's too blurry in my opinion it could be a bit mre sharper. Also you could work on the face.He looks like he hasn't sleeped for a while .

Icons 11 Skins 15
This needs changues
the eyes must be changued
the chest doesn't look realystic
the cloack look's bad
the hair need some changues
But the weapon and the armour look's really cool you selected good colours happy skinning!.

Models 80 Packs 2 Skins 1
mhm, the armor is just a basically recolour, and the chest needs to be changed, look at some real pictures to get references. I also suggest you to change the cape and the face... anyway, good luck at improving it

Icons 4 Skins 1
It looks like you just colored over most of the original skin. I don't think that's allowed.

Skins 3 Maps 1
Once again: Thanks for the comments all! I'l look into them now.


JokeMaster said:
Looks realy nice. But it's too blurry in my opinion it could be a bit mre sharper. Also you could work on the face.He looks like he hasn't sleeped for a while .
Click to expand...

I get that alot
Where is it it should be sharpened? I'm not too sure of it myself.


Kazzo said:
This needs changues
the eyes must be changued
the chest doesn't look realystic
the cloack look's bad
the hair need some changues
But the weapon and the armour look's really cool you selected good colours happy skinning!.
Click to expand...

-The eyes are meant to be white. I'm not changing that.
If you have a way to improve their whiteness, tell me
-Iknow. But it's the best i could do
If you have any ideas on how to make it MORE realistic it would be cool.
Though i have to say it looks okay for a Wc3 model in my opinion...
-I know the cloak is bad. :/ I just couldn't get it better.
I have though gotten some ideas for that now. I'l look into it!
-Yah, the hair's bad.
I might have to look through Mr. Goblin's tutorial agian on that one.
-Thanks I personally like the hammer alot


Fan said:
mhm, the armor is just a basically recolour, and the chest needs to be changed, look at some real pictures to get references. I also suggest you to change the cape and the face... anyway, good luck at improving it
Click to expand...

I actually did look at real pictures for the chest But i'l try to give it another run through.
I actually thought that i had edited the armor enough. but anyways! I'l get going with it!
Thankoes


Darkmoon Hero said:
It looks like you just colored over most of the original skin. I don't think that's allowed.
Click to expand...

Meh I thought i had edited it 'nough, as i just said.
Apparently not though. I'l look into that.


+REP for the feedback guys! Thanks!

Models 181 Icons 35 Packs 1 Skins 70
hey man! first of all skin concept is good but lyk they said hair needs a lil work too, and the flame effect on the cape looks sloppy, i suggest u read a tutorial in this site on how to make a cool falme effect, it'll look cool on ur skin^^

Skins 3 Maps 1
THanks for the comment
And i actually allready fixed the hair I just forgot to add it to the changelog.
The original was even crappier
Also, i'l see if i can find a flame tutorial

Icons 5 Skins 8
I think it is too red now and that bothers me. Use the sharpen tool on the armor a bit. That might help. The gray around his eyes i dont get. His chest and hands have difrent color and that is strange. Other than that i like it

Skins 3 Maps 1
Well, about the Too Redness i can't help ya. I like the redness :/
Though, if i'm the only one, i can darken it abit.
The eyes are gray like that 'cause it makes them look abit "Ruined", which was my original idea.
The chest and head colors: D'OH! I didn't hink 'bout that
I'l fix it.
Also, the sharpen tool might be a good idea Didn't know a thing like that existed really.
(I only know Auto Sharpen. Sorry, new at this )

Icons 4 Skins 1
While it's still not perfect, I like where it's going.

but you shouldn't over-use it. better way is to do the skin in large size first, so you can get all the details.

Misha said:
Hmm.. interesting.. the sharpening actually made a nice and neat pauldron..

but you shouldn't over-use it. better way is to do the skin in large size first, so you can get all the details.
Click to expand...

I actually thought of that trick myself, to make the pic bigger so the pencil's would be smaller, but i haven't tried it out yet.

Thanks Any ideas for improvments?

Also people, some of you've been saying the chest is bad: How do i improve it?
Any ideas?

Skins 3 Maps 1
'Kay guise. Gonna fix up a icon when i can, and then i'l declare this finished.
Unless anybody has more they want fixed?
Last edited: Mar 19, 2010

Skins 3 Maps 1
OOH! Got moderated!
It didn't get accepted, but i'm really appreciating the massive amount of feedback i just got.
I'l make sure to work on my skin!
Thanks mods

Models 181 Icons 35 Packs 1 Skins 70
Now i love the face!!,
U changed the cape design? well looks cool that way so i dont bother,
I know one thing that might help u in alpha skinning, what photoshop r u using?
cuz its WAY too EASIER to alpha skin using photoshop 7.0, I use that. thats why i have so much ease in alpha skinning


PS! u dont have 2 find anything tn photoshop 7.0, u just color on the place u want and done!

Skins 3 Maps 1
Eh... what color? If there is a color that i just have to paste on the area, it would be AWESOME!
(I'm using Photoshop Elements 7.0)

Models 63 Icons 1 Packs 2 Skins 4 StarCraft II Resources 2
Dragonson.. would you be so kind and NOT post several posts in a row?
multi-posting is not good and you might be punished.

EDIT button is there for a reason.

Icons 5 Skins 8
The hammer on his back looks childishly bad. Better remove it.

Also, about the cape: Better change it than remove it.
I'l work on it, but no removal.

SO:
What and how should i edit now?
Feedback is nice, but how to atually DO the things you want changed is really a nice thing to know


EDIT:
Actually, i've been thinking it over.
The cape isn't really complimenting the skin so i might actually just make it look like it originally did.
That also leaves some space for team color
Last edited: Mar 21, 2010

Models 114 Icons 9 Packs 7
You asked where it is blurry. I think the legplates look a bit messy :/ It looks like you've spilled some strawberry ice cream on them or something you should make them more detailed

Allright... it seems i've gotten 'nough Information on the feedback i've allready gotten to get going.
I'l start working on the next version.
You must log in or register to reply here.