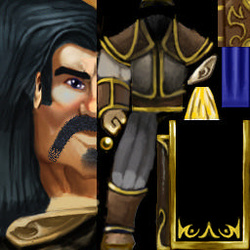 I needed a mage model that somehow corresponds to this icon:

This is not full re-skin but the changes are the face and the ball on the staff,
that is golden,
as the skin is for Gambler.
Tell me please if you have some ideas how to make it nicer.