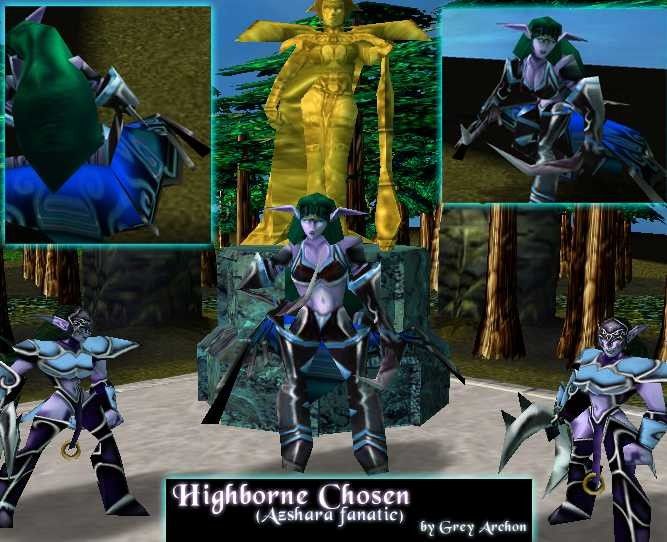 This bundle is marked as recommended. It works and satisfies the submission rules.
View usage Statistics Legacy download
Reactions: Ićpomp, deepstrasz and dorimor
A custom skin for the "DemonessBlue" unit, to make a Nightelf "Highborne Chosen" unit. Proper pathing is in the README .txt

These women were amongst the most fanatic of Azshara's followers, worshipping Sargeras as a god. In turn, they were granted great yet destructive magical abilities, but their bodies subtly changed to accomodate such demonic power.

A new unit for a War of the Ancients map/story. I've just ordered the book, so keep an eye out for more WotA characters... maybe units like Young Vash and others.

View in 3D Download
Reviews
THE_END: The wing design is just great with the combo of teamcolor, I wish some of the original armor was redone though...
Read full review...

THE_END: The wing design is just great with the combo of teamcolor, I wish some of the original armor was redone though...

nb could use a bit more work on some parts. 3/5

i have to say you beat me to it i was make a skin very similar to yours but my ne skin colour was a bit to purple so i think i might use yours in my maps cos its alot better and i am gonna give it 6/5 (i no 6/5 isnt posible but if it was i would give you that) :shock: :? :shock:

you do know that the highbourn are the high elves dont you
Click to expand...

Before the well of Eternity collapsed, there was an 'elite' group of nightelves who followed Queen Azshara closely. They were called the HighBorne, or Quel'dorei. They studied the existance and use of Magic, coming from the well of Eternity. When Sargeras the Fallen Titan contacted Azshara, they were overwhelmed by his powerful magic presence, and started to worship him instead of Elune. Eventually they tried to summon Sargeras into Azeroth through the Well of Eternity.

After the War of the Ancients, and the sundering of the world which created the continents and the Maelstrom, the use of magic was forbidden. However, the highborne, cursed with the same magic addiction which still exists today in the Blood Elves, refused to obey this new, druid-enforced law. When they performed a greater crime against the Nightelves, they were banished from the nightelven lands.

They sailed across the raging ocean, and eventually founded Quel'thalas. They would still be known as the Quel'dorei, or Highborne... High elves.

Skins 3
You dont get out much do you Archon? 5/5 on skin I would rate it a 4/5 but you know your history

Models 28 Icons 30 Skins 7 Maps 3
Meh, it's holiday and too hot and humid to go outside. I have an airfan, a glass of icetea and photoshop.
I desire nothing else.

young ilidan would be nice. A cool one

Skins 3
no where near 5/5, but still better than much of the bad skins.

young ilidan would be nice. A cool one
Click to expand...

Shrinrokon: You havent even listened to the warcraft story, have you?

Shrinokon u got you sorry ass owned by GreyArchon that seems to have more knowledge about warcraft history then u. Great skin but the wings should be removed

Icons 1 Skins 1
I imagined Queen Azshara with more human like skin since i assumed she was also a highborne elf. Oh Wait! She was purply before she learned magic! Learning that nasty arcane magic changed them =P

Now i just keep reading more of that lore and i guess she could have still been purple >.< screw it!
Last edited: Mar 11, 2009

Could you make more War of the Ancients models/skins please?? it would be very useful...like i believe it was said a young illidan? that would be one of the most useful i think...maybe a young malfurion too, if not its fine for malfurion because ill just use druid of the talon plz ty

And technically it wasnt fully the magics fault that made them "un purply" i mean sure it was their fault because they got exiled but it was actually because they adapted to the sun..As night elven power is decreased tremendously in the sunlight...thus the name..."Night" elves...
Last edited: May 29, 2009

great model.... but the only problem i see is the face. It kinda looks like she is in pain.... sorry^^
You must log in or register to reply here.