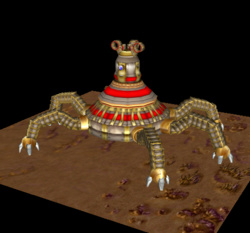 you may recognize this if you play 'The legend of Zelda: BotW'.
He is completely selfmade (Milkshape3d)
The animations are too selfmade
The Wrapping is also selfmade

This is the Guardian. The Strongest Enemy you can hope to defeat.

Description:
"An ancient guardian of old times. He is strong enough to withstand attacks from demons like Mannoroth and even Tichondrius and maybe Archimonde. His Attack, consisting of a highly concentrated mana-beam, can surely kill anyone and anything who/which isn't careful enough. It is highly recommended to flee if you don't have anything that can penetrate his armor."

Weaknesses: (I write this only, because this is sort of like Wikipedia)
- The Titans of Azeroth.
- Sageras.
- Weapons strong enough to penetrate his armor.
- His own Laser/Beam, if somehow directly reflected.


----------Update 24. Jun. 2017 (Major)----------
- Rewrapped the Texture on the head to match the 'ears'.
- Rewrapped the Texture on the bottom of the 'Body-part'. (It should represent a sort of Weakpoint of it.)
- Remade the Death animation to match the one from it's Breath of the Wild-Counterpart.
- Small malfunctions are appearing during his death animation
- Added sounds for the malfunctions.
- The Death explosion is still there, but adjusted to the new death animation.
- Changed the Death sound of it.
- Made some of the animations a bit faster.
- Added 'hand'- and 'foot'-Attachment points.
- Tweaked the Attack animation a bit.
- Added a Collision shape that is incasing his 'torso part'.
- Changed the Data-Name of it to 'GuardianWalker.mdx'.
- KB-Size: 478kb --> 382kb
- Polycount: 4090 --> 3033 (I got it small enough without destroying the look of it.)

---small author note---
#He has no exhaust port and he doesn't need one, because his fuel is magic. That means that he practically can't ran out of fuel with so much magic running through the planet.
+ Added ingame screenshots.
----------Notices----------
1. --> If you don't like the Death animation then please PM me if you want to improve that.
2. --> Anyone who can draw or likes to make BTNs/DISBTNs is encouraged to do this with this model.
3. --> You can use any Beam Missile Models you want that fits his beam attack.
4. --> I'm going to add another one, if i have the time to make one
5. --> If you have suggestions for the Head texture then please say so.

If you use this model then give credits to me for this idea,
but don't distribute him and don't edit him without my permission!?!
Previews

General Frank
Although the polygon count is very high and the animations are a bit janky, is it approvable and works in-game. Good job.
Read full review...
Reputation Statistics
Page 1 of 2
Show Ignored Content
Page 1 of 2