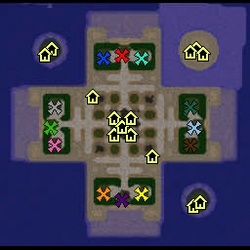 Game Warz, at its roots, is essentially a Footmen Frenzy style game featuring Heroes and units from our (the creators) favorite video games. But, hopefully, we made the game unique enough to keep people from labeling it as "Just another Foots." Anyway, now to explain the gameplay a little bit...

You begin the game by scrolling over to the Hero taverns, where you select one of the thirty-two custom Heroes. You MUST select a Hero because you will not spawn any units until you do so. Once your Hero has been selected, your starting structure will automatically upgrade to the base structure of the game your Hero is from (Ex: If you choose Mario, your starting structure will upgrade into Princess Peach's Castle). There are eight video games represented and they all have a different base structure and spawn different units.

After you have done that, you should notice that your "lumber" increases constantly. Lumber is used to issue a form of control over how soon you can "Tier Up," how many items you can buy, and how often you upgrade your troops. Almost everything in the game requires you to spend some lumber, so you have to be careful about how you use it. However, there is an upgrade in your main base that will increase the rate in which you gain lumber.

Now, when you finally gain enough lumber to "tier up," and do it, you will notice that you don't cease spawning your current units and spawn a new one but an additional unit is ADDED to your spawns and your current units gain an ability. You initially spawn a melee unit. When you "tier up," a ranged unit will be spawned in addition to your melee unit. Then, the next "tier up" gives you an option. You can choose to either add casters or a siege unit to your spawns. The final "tier up" also gives you an option, you can choose to add flying units to you spawns or add a "tank" unit to your spawns (Tank meaning a strong melee ground unit with high hit points).

Hopefully I described the game well enough. Anyway, thanks for your interest. This game was created by myself (Vizion_X), buffwhite, and The_Widowmaker. We play Warcraft 3 on the US East server and will be trying to host the game as often as we can.