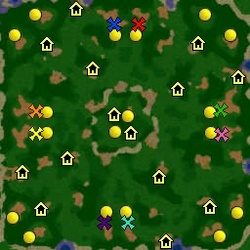 Clash of the Creeps (COTC) is a custom melee map which alters all four playable armies into four entirely new playable armies. The change is more than just synthetic; the mechanics have been heavily edited. There is currently no computer AI for COTC, but it may happen in the future, as I would like to make a COTC based campaign some day.

This map, before modification, was originally a map that comes with Warcraft III when you install and update it. There will be many more to come after the Beta phase is over and there are no more changes to be made.

You can always check back to this page for the latest update notes.

UPDATES FROM 1.1 TO 1.2: (May 30, 2012)
GENERAL:
- The population cap has been raised from 100 to 120.
- A cap has been placed on defense towers with a three tiered upgrade for allowing the production of additional defense towers. Initially, all players can construct up to six defense towers before they become capped, and they can no longer build them. All armies now have a new research upgrade which can be found at their respective defense tower buildings (Briar Vines, Feeding Pits, Tidal Guardians and Corrupted Ancients of Defense) which will allow the production of six additional defense structures up to three times, depending on what level of upgrade the player's HQ has reached, allowing for a maximum of 24 defense towers when fully upgraded. This was implemented to prevent wasting five hours of everybody's time trying to break through endless lines of towers and resulting in nobody having any fun (Note: If a player has reached their tower cap, and one of their towers is either destroyed or cancelled during production, causing the player to again fall underneath the tower cap, then that player will again be able to construct towers until they once more reach the cap or increase it with an upgrade).
- Updated the Loading Screen with additional tips. It now directly informs the player about the food cap raise, the tower cap implementation and adds a message in bold font which strongly advises the player to read all of their tooltips, as players neglecting their tooltips seem to be the largest cause of confusion.
QUILBOAR/CENTAUR:
- Razormane Brutes have have their damage base raised from 16 to 20.
- Razormane Hunters have had their damage base raised from 20 to 25
GNOLL/KOBOLD:
- Feeding Pits have had their attack cooldown increased by 35%.
- The Protect the Grub upgrade for the Gnoll army now also provides a Spiked Barricade effect for Feeding Pits which counterattacks back for 5 damage against melee attackers in addition to the fortified armor that it already provided. Additionally, the animation for this upgrade now shows as Spiked Barricades on the Feeding Pit model rather than Reinforced Armor pillars, which were never intended to be visible.
- Kobold Warriors have had their attack type changed from artillery to normal, as was always intended. This was causing a game crash whenever a player tried to use their attack ground ability, which they were never intended to have (special thanks to Eric "Retera" Theller for notifying me about this bug).
NAGA/MURLOC:
- Naga Myrmidons have had their food cost raised from 4 to 5 and their attack speed slightly reduced.
- Elder Hydras have had their HP and attack damage bases slightly reduced.
- The Naga army now has a healer unit. Mur'gul Shadowcasters now have an ability called Tidal Heal, which is functionally the same thing as the regular Heal spell with an aesthetics change.
- Spawned Hydras were causing a negative population count glitch for Naga players, this has been corrected.
SATYR/FURBOLG:
- Corrupted Harpies have had their food cost reduced from 3 to 2.
- Felguards have had their base HP value increased by 100% and their MP regeneration rate increased from 0.25 to 0.33.
- Darkened Wisps can no longer build structures, as they were never intended to.
- Darkened Wisps are now darker than they were before, so as to make them easier to distinguish from Corrupted Wisps.
- Sargeron Satyr's Rain of Fire spell now does damage over time in addition to base damage per wave.
- Fixed a missing icon for Satyr Soulstealers when they were not available for training.
- The Corrupted Furbolg Ursa Warrior hero was showing as the Night Elf Demonhunter on the scorescreen at the end of a game. This has been corrected.
- The icon for Haunt Tree has been relocated.

UPDATES FROM 1.0 TO 1.1: (May 16, 2012)
GENERAL:
- Updated the loading screen text tip for the Gnoll army; it now directly states that one must utilize the army's speed.
QUILBOAR/CENTAUR:
-
GNOLL/KOBOLD:
- Reduced the attack speed delay on Gnoll Brawlers to make them more worth their cost.
- Removed an empty and redundant ability from Kobold Warriors.
- Updated the tooltips for Gnoll Brawlers and Gnoll Mystics, making them a little clearer.
- Corrected the tooltip for Gnoll Pups (there were two consecutive spaces, this has been corrected).
NAGA/MURLOC:
- Murk was displaying as Blight. This has been corrected.
- Elder Hydras are supposed to spawn Hydras when they die. They were spawning more Elder Hydras making the Naga effectively invincible. This has been corrected.
SATYR/FURBOLG:
-