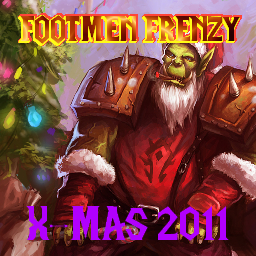 the original version of Footmen Frenzy

Footmen Frenzy is edit by Clan-nEVO.net by order of NoHunters.Com and Clan Halp.

4 teams of 3 players battle each other to gain control of the map and defeat the other teams.

Footmen Frenzy works with W3MMD Standard and HCL for GHost++

*NEW HERO (only for x-mas version)
Add Frosty the Snowman

Before I download this, what makes it different from other footman frenzy maps?
From what I see it looks not much different at all (or minor changes at least).

Maps 1
Fox aka HatoUP aka TheBigGame has created Footmen Frenzy(1.0-4.2), after TheBigGame has metal.bark(5.0-6.2) edit the map. He has hive the map to Roaaarrr(6.3-7.2). After the close from NoHunters.com has Roaaarrr given the map to the Northrend Clan zOlo. And zOlo ahs order me du edit the map. This is thr REAL Footy. No Fake! With his map you have a ativ community (www.Clan-nEVO.net). The map is high balanced. You have W3MMD Standard and HCL support für your Hostbot.

Map is too similar to all the other footman frenzy maps already uploaded here.

Ironside said:
Map is too similar to all the other footman frenzy maps already uploaded here.
Click to expand...

Maps 3 Spells 3 Tutorials 1
I don't have time to be flammed here.
Anyway this isn't the first one uploaded here, so this one will be rejected.

Unless all the others get rejected too.

Maps 1
Sry, i don't wana flame you! My english is bad, so i have to say sry for flamingsound.
But i want to know, why you accept same Fakeversion, but the real Footy is rejected? That make no sense. That makes me sad

Maps 3 Spells 3 Tutorials 1
Because were uploaded first and we couldn't know which is the original.

Hey
I'd like to support the uploading of Viper's map. I just took a look at the other footmen frenzy maps uploaded here, I counted three of which two were actually uploaded in 2005 and 2006. Even if these maps work, I'm sure everyone would agree that within 5 years of mapping a lot will actually have changed. I tested all three of them and I can reassure you, that they differ a lot to Viper's one: The heroes (models/abilities), the items (cost/abilities) and the units (models/stats) vary greatly from the other three maps. The only thing they actually have in common is the design and setup of the map, because they have developped from the very first version many years ago.
Thumbs up for this map

Maps 1
i agree with KiwiLeni

One reason (there are many more, but I know people don't wanna read super long posts) to play this map is that you really need much more micro to be succesful. Units don't die as fast as they do in 5.4, in general the map is more challenging. I've been playing footy for years now, participated in many tournies and played 5.4 as well, but I stayed at the offcial nohunters version ( this one ). If you would try this map you would notice that there's def. another "footy feeling". If you got more questions about this map, I will be happy to post them here. It#S really worth to support the map on this site, in my opinion.

I don't see why you are rejecting the map when it has been stated that this is the most original version of the map.

HatoUP aka TheBigGame first edited the map with version 3.8 - the first of it's kind. After collaborating with Metal.Bark and Roaaaarrrr, the map progressed to 4.2 and 5.3 collectively known as Nohunters footies of which the community was at nohunters.com.

It was at 5.3 that the unprotected version of the map got leaked and released a sleuth of all these fake maps, most prominent were the WFE (windale blizzard 5.4 versions) and that horrible custom footies map (made by bond009).

Those maps all had excessive imbalances making them abusable by anyone with half a brain cell.

The original map however stayed to it's roots and continued to be carefully crafted into the 6.x and 7.x versions. The final Nohunters version was 7.2, after which after disbandment, Nohunters gave the map to clan nevo and clan zolo which are now still balancing the map and adding new material with the 8.x versions at clan-nevo.net.

This map is original in that rather concentrating on heroes alone and trying to promote a hero arena, the map stresses that everything at the players disposal must be used in order to overcome this 12 players FFA. Units cannot be used without heroes, likewise heroes are not 100% effective without the use of heroes. There are many different variations of hero combos and with the lack of recipes - Item efficiency is STRESSED.

This is tactical, and VERY strategic.

Sure it's not as flashy and colourful as the many fake maps going around, but it's still the most original and the most balanced version there is. Alot of work has been put into maintaining the Nohunters.com legacy into this map.

So I request that you re-evaluate your decision to reject this map.

"Map is too similar to all the other footman frenzy maps already uploaded here."

I can't share your opinion, this map is ABSOLUTELY not similar to other maps. Like users already wrote, it's the original and most balanced footy version.

For example: In Footmen Frenzy 5.4 there's usually only one way to win/play the game. It's every game the same procedure, pooling, teching, waving, roar scroll using. I never saw a 5.4 game with another tech than human (this statement just proves the imbalance at the different tiers).

In contrast Footmen Frenzy 8.X is totally different, since there are endless ways and tactics to emerge as the winner. You really should try this map a 2nd time, and if you still think it's not worth to be uploaded, you probably aren't familiar with Footmen Frenzy.

In this sense I'll just agree with all the other users, who had an object about your decision.

Map is too similar to all the other footman frenzy maps already uploaded here.
Click to expand...

I used to play every Footmen Frenzy map i came across. There were over 200 different maps in my Footy map folder. I can't recall any map that has been the same as the other.

They all had the same maplayout, which had to be, for the map could have been called footy.
But when it came to the map itself, every map was so different from the other maps, so that it was always fun to test a new map.
But this was at a time, when there were many Footmen Frenzy maps hosted. There were around 10 different popular versions, but the official series and the WFE-version were the most popular.

WFE-Version was played, because it was easy to learn. You didn't have to use your micro. Everything you needed was a good farming hero, since they cleaned out an entire base without much effort and couldn't even be stopped.
Everyone used scrolls, waited for a late-go, bought recipies and made his hero nearly invincible, etc. etc.

On the other hand, there was the official version from NoHunters. It was played in a more competitive way. THere were tourneys, inhouses, etc.
The official Forum has been full of discussions. It took some time before something was added to the map, since it shouldn't have been imbalanced.

Why add the newest official map?
1) I haven't come across a Footy map, that has been balanced as the official series.
There has only been a slight balance because everything has been imbalanced.
2) The official map is supported by a community, that intends to balance the map and is open for new suggestions
3) The official series can be played in a serious competitive and a relaxing fun way.
4) There's been much effort done, to get this map to its current state.
When looking at the other maps: They took the leaked unprotected 5.3 version, added some heroes, copied some triggers and tried to get a slight balance. These maps weren't intended to be balanced. They're just an alternative to the official series of Footmen Frenzy.
5) This map still gets updated. Haven't seen updates for the other maps around.
The only Footmen Frenzy maps, that are still popular in the battle.net are "Footy 5.4" and this official version.
I haven't seen any other map being hosted, since it's not worth buying a hostbot to host a map, that won't fill up.

Because were uploaded first and we couldn't know which is the original.
Click to expand...

What proof do you want, for we can convince you, that this is the real successor version?
What Tommy Bothan posted, sums up what happened.

Maps 3 Spells 3 Tutorials 1
Thank you for defending the map. I have changed my mind, the real fake maps will be rejected instead.

4.2 used to be an official version, but then it got updated to 5.3 and so forth.

I don't know where those 4.2 Pro and 4.2 -AR maps came from, but they are not supported by Nohunters or Clan Nevo.

u should add item stacking system for the item when we choose heroes and get potion.it trouble when not stack lol.

Maps 1
i work on 8.03b. The version get a new item (Red Healing Salve) It will be stack

Maps 1
Only tried the X-Mas version, so what about the towers?
Didn't I found them or aren't they avaible?
You must log in or register to reply here.

What You Want In Footmen Frenzy?