Fist of the Deity 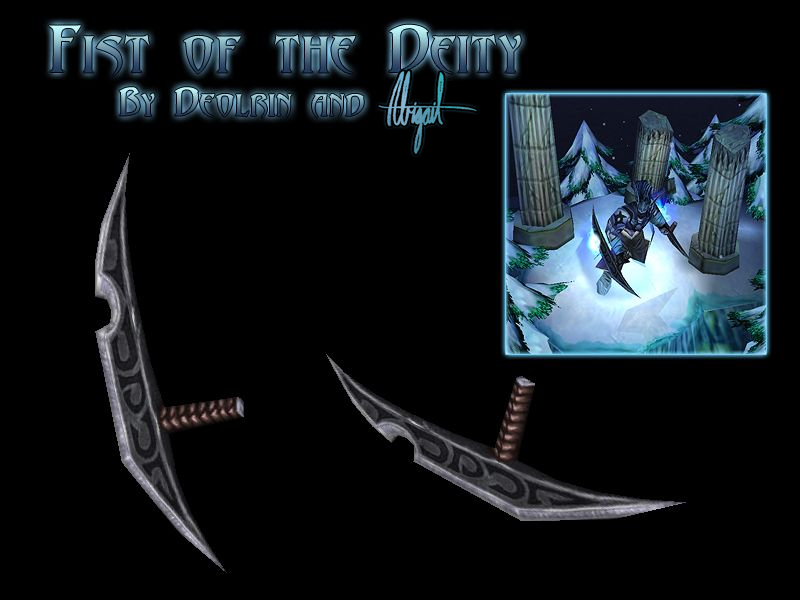 This bundle is marked as approved. It works and satisfies the submission rules.
View usage Statistics Legacy download
Reactions: deepstrasz, JesusHipster, eubz and 4 others
"The twin Fists of the Deity are ancient weapons, crafted by the best smiths of the Amani tribe and enchanted with powerful magics ages ago to be used by the Warlord of the Amani tribe, Zul'jin. After Zul'jin's escape from elven captivity, having cut his left arm, he was forced to master the usage of only one weapon; And thus, the twin blades were divided, one of them being throw away, hidden in a secret spot outside the Amani empire's borders. The abandoned weapon that has slain many foes in the hands of the skilled Warlord is the goal and target of warriors, archeologists and historians alike."

Please note - The screenshot is NOT accurate. The screenshot lacks the blue orb floating in the socket of the weapon. In addition, there is a blue omnilight emitting from the socket's center.

Attach to left or right hand.

The texture is created by Abigail, so major thanks to her!

Fist of the Deity (Model)

How to import this model Sanity check More info Download
Reviews
18:11, 17th May 2011 General Frank: Nothing too spectacular but nothing too bad either. Simple and effective model and good execution. Works in-game and performs well. Approved. Oh, and if you could please change the raw name.
Read full review...

Nothing too spectacular but nothing too bad either.
Simple and effective model and good execution.
Works in-game and performs well.
Approved.

Oh, and if you could please change the raw name.

Models 13 Packs 2 Maps 2
Hey! I love this weapons, that kind of strange sword is my favourite! You gave me a great idea x) +Rep

somehow, it's like a sickle for the frist time i see the picture. Anyway good job bro 4/5
You must log in or register to reply here.

How to use Deity Zenith in my own map?