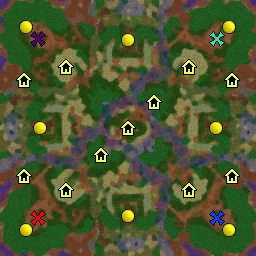 mafe
Hey, look, a map for people who play 2-player FFA rather than 1v1 ;) The judges from the recent contest were not too happy with it: https://www.hiveworkshop.com/threads/hive-cup-2021-melee-mapping-contest-8-first-phase-results.336983/ I tend to...
Read full review...

Maps 10 Tutorials 1
Hey, look, a map for people who play 2-player FFA rather than 1v1
The judges from the recent contest were not too happy with it:

I tend to agree with them, but for different reasons.
First of all, I hate to say it, but I dont like the visual theme. Yes it is really creative. Yes, there was a lot of work done to make it looks interesting. But for me, it creates a feeling of unsteadiness and disquiet. Normally I would critize maps if they have large patches of a single tile, but here for once this might have been a good thing.

On to gameplay. As suggested earlier, there are two features that I more likely associate with FFA-maps: The weakly defended merc camps near the base and the general expansion layout, which to me just feels inconvenient any annoying to play around, rather than fun. Also, the explicit exclusion of cross-position is weird and I do not see a clear and obvious upside. All of this is of course quite unique and creative, I'm just not convinced it fits well with a 1v1 map.

The other gameplay feature like creeps and itemdrops are balanced and make sense. The minimap shows many orange camps all around the center of the map. Maybe it would help to learn the map if the central lvl 10 camps were downgraded to lvl 9. Except for the expansions, I do like the general layout.

This review might sound harsher than I want it to be, but imo this map could be best described as "trying some interesting new ideas, but which ultimately they didnt really succeed". It might be different for 2v2. However, this is quite high-level criticism, and gameplay can be subjective, so I wouldnt be surprised if some other players still have a fun time playing the map. Therefore map approved.
You must log in or register to reply here.

The Book of Virtue