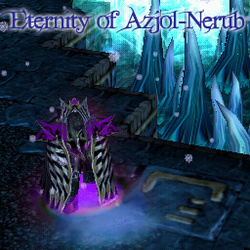 This is a AoS made by me and Solicran, it is a 10 player map. Currently there are 12 Heroes. And there are well, not soo many items. The Map himself is based on the synergy between the heroes and skill synergy of the single heroes, so example: a hero is based on massive aoe damage (magmathid) but is only effective with a slow hero (sands of time) who holds the enemies in the slow. It is overall really unbalanced and I shortly removed all the heavy bugs.

So give please balance suggestions, maybe hero ideas for the 4 heroes i could add (so it would get 16 heroes overall). And say what you think of that map, critism are welcome.

-12 unique Heroes with a own concept, story (the "!" infront of them), triggered skills(mostly) and a battle strategy.
-auto-upgrading of the forces.
-95% of the spells are trigger-enhanced, and a few JASS.
-relatively Balanced, it is still BETA.
-some self-made Skins (Sands of Time by Solicran, Chaos Ravager by redscores).

Unlocked Version, but give credits to the maker if you use heroes or spells or skins out of it(sands of time skin = solicran, chaos ravager by redscores)

UPGRADE: 0.07 is out!
-weather system.
-many commands for the usage of the player.
-Sorrow nerfed.

UPGRADE: 0.11 is out!
-many balancings and bug fixing.

UPGRADE: 0.12 is out!
-made game play faster.
-completely reworked the nerubian queen, now known as broodmother.

UPGRADE: 0.13 is out!
-Many many many balances.
-Added Scroll of Town Portal.