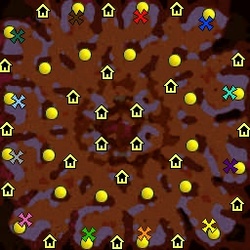 You take part in the war between the orcish clans to declare the "New Lord of the Clans"! Choose one of the orc clans on Draenor and proove that you are the only one worthy of this title. Team up with another clan to form an even greater Horde to overcome the other clans and steal their artifacts.
Lok'tar ogar!

This is an altered melee map (Emerald Gardens), based upon the orcish clans and their leaders and heroes mentioned in Warcraft lore. Also you will be able to receive powerful items called "Artefakte" everytime you kill a specific enemy hero with level 6+. The centre of the map can be used as a portal to the Twisting Nether. So if you bring a hero near the portal, who has the four needed artifacts (Eye of Dalaran, Book of Medivh, Jeweled sceptre of Sargeras & Skull of Gul'dan) you will be able to "build" demons in the portal.

The game descripion and everything else of interest like, which artifact drops from which hero, can be found ingame by pressing the Quest-Button. But keep in mind ALL THE INGAME DESCRIPION IS IN GERMAN! I just don't have the time or the abilities to translate all the tooltips of every unit. Despite that I only own a german version of the game...

This is the Multiplayer-version of NLotC and still a BETA-Version. Because I had to reduce the size of the map (8 MB limit), there are still a few custom models which unfortunately did't make it to the MP-version. I also have some troubles with the IA (Singleplayer-version) and with a few custom made skills. So if someone has an idea how to reduce the size of the models even more or is skilled in programming or AI, please send me an E-Mail:
OverlordAlfredo@gmx.de

credits:
I used so many custom models and skins for this map, that I just cannot remember everyone who deserves credit for his work. The people I did remember are mentioned ingame under "Quests". If you find your work used in this map an I accidentally forgot to mention your name please e-mail me!
Credits go to every skin- and modelmaker on the Hive!
Guys you are great!

Mapping, Triggers, Ideas & Objects are all made by me! (Overlord Alfredo aka Overlord, aka Alfredo)