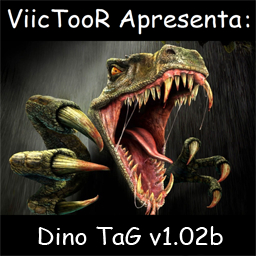 In a time far, dinosaurs and humans could not live in harmony, always fighting battles, it was a difficult period, many humans and many dinosaurs died in this war, you will can also participate, choose your team and come on win this war!

You need to run, build your base, gather resources and recruit a hero, the hero uses to kill the dinosaurs. You win when all the dinosaurs are dead at the same time.

Team of the Dinosaurs:

You need to build your nest, collect resources to level 6 to level and break into the base of humans to kill them. You win when all humans are killed at the same time.

There are two stores.

Sells books and claws for dinosaurs.

Sells books and ammunition to humans.

NOTE: I do not speak English, I'm using google translator, therefore, any error in entering, please let me know.

Map Info View Resources In Use Download
Reviews
11:21, 7th Sep 2011 Vengeancekael: Status: Rejected Update: Credits listed, please improve the description by really telling me what makes the map special. If you can't, it will be rejected for lack of originality. Contact Me Update...
Read full review...

11:21, 7th Sep 2011
Vengeancekael:
Status: Rejected
Update: Credits listed, please improve the description by really telling me what makes the map special. If you can't, it will be rejected for lack of originality.

This map is a simple tag, where humans fight dinosaurs.
Click to expand...

ALL of The Hive Workshop for providing models / icons (especially the olofmoleman available for all models of dinosaurs)
Click to expand...

Please, some moderador could evaluate my map?
Click to expand...

Yes I know it can be annoying, but there are over 150 pending maps, give us a chance.

Rejected until updated: List everyone under credits and go more into details on what your map features and what makes it more special.
Right now this looks like any other tag game, so convince me it's better.

Maps 9 Spells 31 JASS 2 Tutorials 1
I really dont know why this map is approved, it's not even in english, hmmmpp...
You must log in or register to reply here.