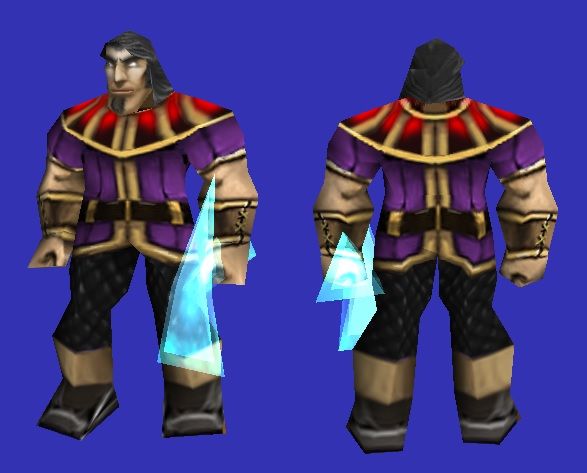 This bundle is marked as useful / simple. Simplicity is bliss, low effort and/or may contain minor bugs.
View usage Statistics Legacy download
This is rather an old model of mine from when I was aiming on creating alternate appearances for all the Human units to make them appear like different member states of the Alliance. This was the second Peasant I made for this purpose, the first being the Kul Tiras Worker found for download on this website.

I am not planning on any new additions or changes to this model since I rarely touch modding tools anymore, but I wanted to get some of my finished models out there for the public to use.

I do realise that to some this is a relatively simplistic model, but it was done that way on purpose so that it would fit the role it was designed to have; it is a head switch geomerge with a new texture and an altered pickaxe model which has been made to give the appearance of it being forged of solid magic. Hopefully someone will find use for this.

Maps 1
I like the model thx for the release. I dislike the pike though.

This actually looks pretty neat. I like that diamond/magical pickaxe or something. 4/5.

Models 87 Icons 108 Packs 6 Skins 1 Maps 2 Spells 1 Templates 1 User Interface 3
It's too simple and it can be done with in-game textures.

Sin'dorei300 said:
It's too simple and it can be done with in-game textures.
Click to expand...

It can? Please enlighten me on how you can completely change the head part of the model, and the pick axe with added transparency to give it a crystalline appearance through in-game textures. Prove to me how it can be done, as far as I can tell, there is no way to use in-game textures to edit a model, plus surely using only in-game textures makes it even more simple which goes against your first part of your comment.

Don't make a statement like "it's too simple and can be done with in-game textures" without backing it up with evidence.

just use the crystal doodad in azjol'nerub texture

i'm not crazy about the pick to be honest

the concept of it just seems a bit weird, a crystal hammer for working?
You must log in or register to reply here.