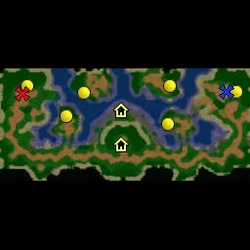 The concept:
You select components of your custom race, rather than being given a set race. Originally this was created for a campaign, which may or may not get made, where each mission you select a new component to add to your race.

There are seven choices: 17 Tier 1 options, 11 spellcaster options, 11 seige options, 10 flying options, 4 naval options, 10 second barracks options, and 10 final options. There are a total of 8,228,000 possible combinations, and enough units, buildings, abilities, and upgrades for 12-13 complete races. I am insane for doing this. (a sample set of choices)

The Void:
There is another race, the Void, that I have just added. They are seperate from the customizable race options, as their mechanics are very strange. They do not use gold, but rather produce all units from a building constructed over a gold mine. They have various other strange mechanics as well. I'll do a full writeup of their units and whatnot later. For now, check them out in game. (void base with units and hero)

The story:
The Changelings are an extradimensional, immaterial race of shapeshifters that copy the forms of species they encounter in their dimensional travels in order to make war on each other and their common enemies. They have come to Azeroth to find new forms, hone their skills against each other, and ultimately destroy the Void, a race of anti-matter warriors that they have followed to Azeroth.

Six Changeling generals have come with their followers. In the campaign, you would play as one of these generals, and you would choose which encoutnered specimens should be added to your forces. Meanwhile, the other five are doing the same, but off screen, and they always make the same choices (for multiple play throughs).

Downloads and installation:
Currently, I am testing this system on a modified Booty Bay map. I'll be moving it over to a few more soon (for multiplayer only, most likely, since importing all of the files is a huge pain).

For single player with no patch:
You can download the map uploaded here, or use this link:
http://dl.dropbox.com/u/526357/(2)ChangelingMeleeBetaNoPatch1.1.w3x

Simply put the map in your Maps folder and run it through WarCRaft 3, or open it with the World Editor and choose File - Test Map. Just make sure that you aren't using a fixed random seed (File - Preferences - Test Map - Use Fixed Random Seed).

Or, you can use the multiplayer option:

You also need the patch to play the multiplayer version:
http://dl.dropbox.com/u/526357/War3PatchChangeling.mpq

Once you have these files, put the map somewhere in your Maps folder. If you have MPQDraft, you can use it to open the game with this patch. If you don't, you can simply rename this MPQ file to replace the War3Patch.mpq in your WarCraft 3 directory. Just make sure to backup the real one by moving it or renaming it. Then just open the game and play the map as a custom game.

You should be able to play over LAN and Battle.net, so long as everyone involved has this patch.

Testing:
I'd like any feedback you have. Comments, questions, balance issues, bugs, etc.

I realize it will be impossible to ever fully balance this monster, due to the 8,228,000 combinations, so that's not as important for testing.

I also realize this system isn't good for competition, as it's extremely difficult to anticipate what your opponent could possibly do, even with lots of scouting. It was designed for a camapaign, so that's unavoidable.

Credits:
Not all of the listed models/icons/spells are available in-game yet, but they're all in the mod/map, and will be used once the natural form Changeling race is done.

What's to come:
This map is complete and playable, but there are other things I want to add:

I am planning yet another race: Changelings in their natural form, which use mana in place of lumber as a secondary resource.

A friend should be writing new music for this mod soon as well.

I'd like to make AI for the Void and the five preset race options (the ones the NPCs would choose in the campaign). This could take a while, and may never happen unless I get a volunteer to do it for me.

And of course, if I ever get around to it, I'd like to make a campaign with this system, as that was the original idea. This also may not happen, since I've spent long enough on this thing, and still have more to do outside of a campaign. If I get enough interest though, I'll do it.

October 21, 2010: Fixed the Devourer's name. Removed an ability that Rhinoloxes shouldn't have had. Fixed the requirements of the Extradimensional Spaces upgrade to require the correct building. Fixed some typos in the Violator's Absorb Void Spark ability.

October 19, 2010: Updated the default map (the one uploaded here, not just linked in the description) to be the single player version. It now works through WarCraft 3 directly. Also fixed the patch file to be the most up to date version. If anyone had missing icons or models while playing, this will fix them.

January 31, 2011: Fixed the map description slightly. I should have the natural form Changeling race up within the next week or two.