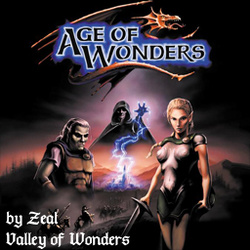 v1.1
i removed some bugs i notised and added an upgrade for summoned units (undead and nature minions)

In the first days of the World all living beings were ruled
by the Elven Court where the Wizard King Inoch set
upone its throne where he maintained the delicate balance
over the Light and Shadow.
Banished from his garden,a new race called Humans sailed to
Inochs realm attracted to expend there and enter
the Valley of Wonders seeking the Elven Court.In defiant hordes
they besieged the Valley.Unable to repeal the siege King Inoch
and his Court were slain.
Queen Elwyn Inochs second wife fleed the burning ruins with her
baby Julia.Inochs firstborn prince Meandor fell among the dead
The fall of Inoch Court divided Elves into fractions.Some of them
desired only to rebuild tranquility but others scared by their loss
swore on annihilation of all things human, unable to forget the
carnage these Dark Elves cultivated malice,embaceing the shadows
and from the dark underground hideouts they sharpened weapons of
war.

But the child Julia grew in a remote islland where Queen Elwyn
gathered elves from the Inoch Court.As she matured she allied
herself with virtue joining cult called Keepers.
Mistaken for dead and shackled by vengeance Meandor embraced
the Dark Elves and found the sect called the Cult of Storms to roar
terror on all who oppose their dark ideas.

After two centuries of war a new Star appear over the Valley of
Wonders. Keeper scouts spotted Meandor lurking around the ruins of
the Elven Court. In response Julia too followed the omen hoping to
understand her dark brother scheme.
And uneasy silence engolved the lands

Inoch have risen from the dead to take his rightful place in the Valley of Wonders.Now the armies are gathering. Apocalypse is approaching.
The Bloody Star of Vengeance shines over the guilty humans but they will have no shadow to hide for the shadow belongs to Meandor

The time for the new aeon has come.

Moderator
This map has been examined by Alexis Septimus. If you believe this map review is not accurate, or require another review, please feel free to contact Alexis Septimus via his profile listed below. This map will only be reviewed again, for the second...
Read full review...
Reputation Statistics
Show Ignored Content