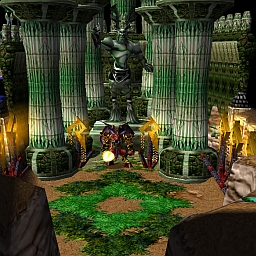 This bundle is marked as useful / simple. Simplicity is bliss, low effort and/or may contain minor bugs.
View usage Statistics Legacy download
This map is about Kanaka's trolls.

There is an Island ruled by orcs, troll tribes on that island are in friendly relation with orcs.
These savage tribes and clans have common enemy in Silverwind Humans.

Azil'jin after conversation with his father looks for minister saruna, and follow his orders to
Vukan leader of Kanaka'jin.
There at Vukan Aziljin will have to chose his way in serving to Kanaka'jin, as Warlord, Berserker, Druid or Shaman.
While Tribesman Aziljin will have no abilities, and its better to leave quests for after replacement.

In kanaka'jin village where Aziljin spawns, are 2 shops, 1 with potions and 1 with noncombat consumables. These are harder to notice thats why i must say about them.
Also in all other camps/towns are same shops with improved stock.

Azil'jin's quest will follow 1 professions, if you chose way of Warlord or Berserker your quest will lead you to Armor/Weapon smiths and give you Mining profession, then later in game you will be able to craft various armors at Blacksmiths in all major towns.
On other side if you chose wisdom, there are 2 diferent professions.
First 1 is for Shamans, its called Elemental Extraction, you will be extracting elements from herbs around world and with these extracts Shaman can make nice relics or scrolls, vendors of this professions are little harder to find, but they are also in all major cities.
Second one is for druid, its called Herbalism, also about herbs, but just gathering them, visiting Alchemy store will grant you nice potions/elixirs.

There are many quests, many items, special spell power items grant bonus on all spells that deal magical damage.
Agility increases critical strike chance instead of movement speed.
All classes are balanced less or more, if you find some bugs pls report i didnt have much time to test this map, and i will accept any sugestions.
Thank you.

hey, i played this map some months ago and recognized that many bugs occured. i think i play this again these days and give u a feedback! blessman

Terrain is more or less ok, nice wc3 stile.
Triggers are bad, you have like 10 item triggers that generate 5 same like functions for each trigger, you should nest them into 1 big if the else function.

Maps 4
Yea i agree map is complete bullshit, i made mistake and uploaded it instead deleting :/ real sorry, but about abilities there are some just its needed class transformation, first troll you play has no spells, but once he comes to main town he trains for druid/warlord/berseker/shaman and learns spells.
Someone should remove this map from map list.

Icons 2 Skins 2 Tools 3 Maps 10 Spells 5 Templates 5 Tutorials 7
Is not bullshit, it can be better.
For example just add brutal attack or axe trow or any other base ability to hero, so you can actually cast some spells from start.
Then add messages that will show on screen updated/finished quests.
Then add few more items.
Then finally add some different creeps (mix them a little, instead simple wargs you can have, warg, dire warg, raged warg, giant warg etc)...

In 1 big update this can reach approved state with 2/5 rating.
You must log in or register to reply here.