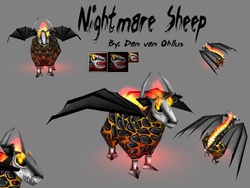 A sheep from hell. This creatures is exceptional at fire
abilities and can spit fire with it's flaming manes.
It is a rumor that the Nightmare Sheep was transformed from
a regular sheep thanks to the power of the Burning Legion.

The model is based on the WoW Sheep. I've added wings (Illidan),
horns and fire emitters to make the model look more evil. I've also
added team glow so that players know who is the owner of the unit.

The main attack of the unit itself is a ranged type since melee
will make it look weird for attacking a unit, but it's your choice.

The skin is made in various ways. The wings and horns were recolored,
the lava and ears were filtered (in a good filter choice). But the
rest is truly freehand (skull, bones and lava rocks). So I did made
a great effort and the skinning took a lot of hours.
The lava and rock thingy was inspired from Olof Moleman's Hell Dragon
model.

GIVE ME CREDITS IF YOU USE THIS MODEL IN YOUR MAP!!!

Directories:
just remove war3mapImported\ and save and restart World Editor.