Greetings, I'm trying to implement a system for faction in game that during night, enables some abilities, empowers others, and that kind of stuff. Anyways, I'm having problem with following trigger: 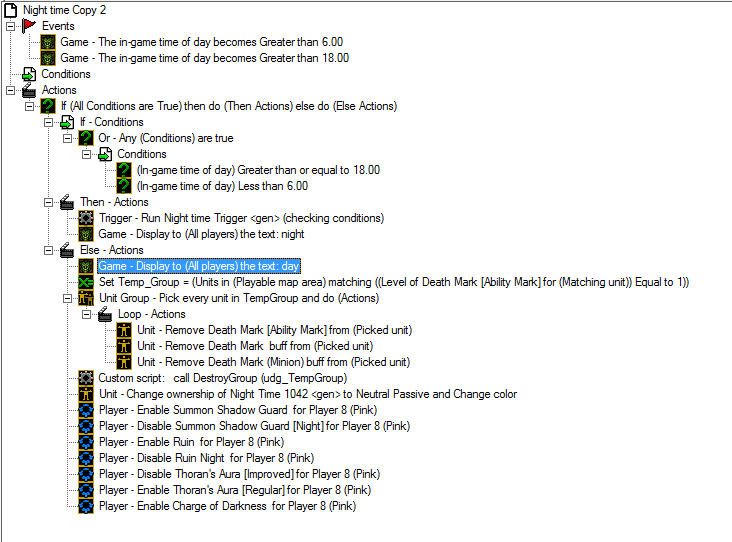 When I'm using an ability of some units, everything literally fcks up, and when the day hits, the trigger instead of doing day stuff, it does the night stuff. Yeah, like what the hell.

It's not just one ability that 'destroyes' this trigger, but more than that. Some of them are triggered, some are not. It's kinda awkward as hell, but what I'm sure of, is that none of those abilities should mess up the trigger, aka they have no trigger connected that would alter the 'Night time Copy 2' trigger, or does not alter time of the day.
Example of such spell can be: altered soul burn, scroll of speed. (Non triggered)

Anyways, when the triggers get messed up, and does 'night' stuff when the game time changes to 'day', it can be somehow fixed by using "artifical night" spell, which I have on diffrent unit. After artificial night expires, the trigger seems to be working correctly. (Artificial Night spell has a trigger attached when cast, with one action: "Run Night time Trigger".)

I'm kinda clueless as to what is causing the problem. I've been trying to trace the problem to abilities that 'mess' up the trigger, but they are just fine, atleast it seems so for me.

Help is much appreciated. Thanks in advance

Icons 5 Spells 2 Tutorials 2
In the Events, try using equal to instead of greater than and less than.
Same with the condition.

It seems like the greater than/less than had some flaws, not sure where, but had it. The Equal to works as intended and fixed the problems. I had to rearrenge the trigger for artificial night, but that's nothing major, the thing that matters is that the night/day system works as it should be.

Thanks for the help
You must log in or register to reply here.