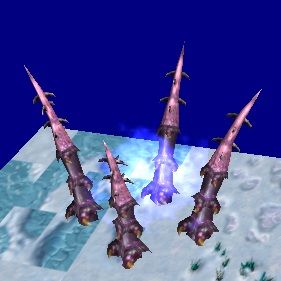 This bundle is marked as approved. It works and satisfies the submission rules.
View usage Statistics Legacy download
So, death effect for Nerubian buildings. There are 3 different to use it with my building models. First is just import it as Objects\Spawnmodels\Undead\UDeathMedium\UDeath.MDX.
Second is importing it as Objects\Spawnmodels\NightElf\NEDeathMedium\NEDeath.mdx and changing building's spawn model node in model editor to spawn night elf death effect instead of undead, and third is opening building in model editor, then opening sequence manager, then click on death anim and copy first frame ID. After that create attachment bone, give it the same cordinates as death effect bone, delete death effect bone and change attachment's visibility to ID you copied from sequence manager. After that change attachment's path to war3mapImported\NerubianDeath.mdx, and voila, you have working model - just save it and import with death model to WE. I haven't tested last way, but it should work.

How to import this model Sanity check More info Download
Reviews
12:15, 29th Oct 2015 Misha: it's a nice effect, but it could use improving, contact me if interested :P
Read full review...

Models 64 Icons 1 Packs 2 Skins 4 StarCraft II Resources 2
nerubians aren't really connected to faceless or forgotten ones.. they just worship the old gods, i think.. I'd suggest creating a new model for the nerubian buildings and having this for faceless

Models 11 Packs 1
as Misha said, if you played the war3 campaign you'd know that nerubians are in no way connected with faceless men, in fact they are afraid of what lurks even deeper below them in Azjol'Nerub: faceless men and the Forgotten One.

So you could convert it to FacelessDeathEffect, but since faceless dudes dont have any buildings you should probably convert it to a spell special effect or something.

WOWWiki said:
At the ancient continent Kalimdor's center was a mysterious lake of incandescent energies, the Well of Eternity. It was the true heart of the world's magic and natural power. From this magical ether the silithid were born. As the fallen Old God C'Thun recognized their appearance, he attempted to sunder the world that it once held in its unmerciful grasp. The Old God created avatars from the silithid in its own image. These avatars were to be known as the qiraji.

The aqir ruled the lands of the far west. These clever insectoids were greatly expansionistic and incredibly evil. The aqir were obsessed with eradicating all non-Arthropod life from the fields of Kalimdor. So the two big troll empires of Gurubashi and Amani found their common enemy in the third empire — the nationDF 43 of Azj'Aqir.

The trolls fought them for many thousands of years, but never succeeded in winning a true victory over the Aqir. Eventually, due to the troll's persistence, Azj'Aqir split as its citizens fled to separate colonies in the far northern, western and southern regions of the continent.

Three aqir city-states emerged — Azjol-Nerub in the northern wastes, Ahn'Qiraj in the western desert and another group to Dread Wastes in the far south. So the new empire of Azjol-Nerub that stretched like a great web beneath the desolate glaciers of the land later known as Northrend was founded.
Click to expand...