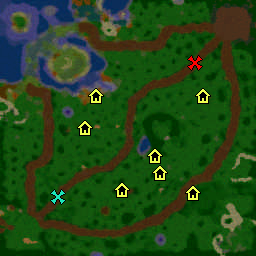 This bundle is marked as approved. It works and satisfies the submission rules.
View usage Statistics Legacy download
One of my very early map projects. It is an epic AoS-style map, crammed with a bunch of features and stuff. Can be fun if you're searching for a long-timed AoS game in which you can also battle some bosses or play against a full AI team.

- There are some Bosses you can fight.
(Example: Neptun-Quest - Neptun tyrannizes a Naga tribe at the coast. Defeating Neptun will not only grant you an interesting loot but also the help of the Naga troops at the coastal front. After a specified period of time, Neptun will return and he can be defeated again)
- AI script (fill up player slots with computer players or play with friends against full computer team incl. special challenge difficulty. For example computer controlled heroes buy themselfes items, when playing against computer-only team, they do upgrades as well. The challenge mode is meant to provide a real challenge when playing against AI only)
- Most heroes use completely new models/skins from the community
- Different upgrade soluations to boost your troops offer varied tactical possibilities (build a dragon roost first to add powerfull dragons to your troops? Or just upgrade weapons and armor of your soldiers? You may also upgrade mighty auras for your general.. etc)
- Many quests and epic items to discover
- Arena Tournament Event (forcing both teams to fight against each other in the arena for the champions belt)
- Respawnable creeps
- Terrain from scratch
- weather system (creating random weather effects from time to time)
- Item system (you can only carry one item of each kind. ie. one weapon, one pair of boots etc.)
- Craftable weapons
- Hire the frigthening 'Army of Ogres'
- A bunch of other small features

Any kind of feedback is appreciated.

Thanks and cheers
Contents

Maps 7 JASS 1 Tutorials 1
I'm wondering if anyone is ever gonna test it?!
Even if he's not going to approve the map, a short notice would be fine.
Thanks.

Icons 3 Maps 1 Tutorials 1
Its a very nice map with good terrain and system. I like the idea. Very good with the AI also. I dislike the fact that some heroes are not edited, and just have the main abilities of an original hero. I would like to see new, custom spells in the future. ~Approved.

Maps 7 JASS 1 Tutorials 1
Thanks,
there were a lot of good comments and critics people told me the last time that make much sense to me. I will definitely take care of all points and have already started working on a new version. Probably it's gonna be a new map (instead of an update) that will be based on this one, but improved in different ways. Anyway it'll take some time since I'm kinda busy with study right now.

Some things I'll definitely change for the next release/my next map/whatever:

- smaller map (about 192² or something so it'll stay quite large, but not as large as it's now. less size-&gt;less units at all-&gt;less lag, and i guess more direct gameplay)
- better hero-design (individual heroes on both sides, more custom abilities etc., trying to get more style at this point)
- terrain improvements
- gfx changes
- better/faster or let's say more direct gameplay (already mentioned this, but I'll make some changes on other aspects as well to reach this goal)
- bug fixes (like the possibility to buy things at enemy shops, no more mass units buyable at the shop that produce lag etc.)
- AI improvements

Anyway, other comments, suggestions etc. are very welcome and I try to take care of them.

Packs 1 Skins 1 Maps 11 Tutorials 1
Added the "Open Source" tag as requested by the author.
You must log in or register to reply here.