Tools 2 Maps 2 Spells 5 JASS 1 Tutorials 4
Ever wonder how to program? Does the text bother you? Have you always given up in the past?

When programming, there are two portions to it. First, there is the actual programming portion. Second, there is the syntax of that programming. The study of syntax is a whole other thing. Many people teach both syntax and programming together, making it very difficult for new people to learn how to actually program.

This attempts to teach programming and then syntax.

When you code a script like JASS, the JASS is translated by Warcraft 3 into the operating system instructions, which are then sent to the CPU. CPU instructions can also be directly accessed nowadays.

There are many different types of programming instructions. From here, these are combined into many different useful constructs, in much the same way that you would combine a lot of different materials to build a table, a chair, or whatever else.

So if you were to have a number like 693, then depending on the computer, it would probably be split up into two pieces of memory (like in the above diagram). When you read this value, you will just see 693. This is because the operating system (or warcraft 3 or whatever) will retrieve these pieces of memory for you and combine them into the 693 that you are seeing.

Block 1 would start at 0 and be of length 3 (remember, programmer's only care about the values, not the blocks). For the operating system, it would be of length 6. In a language like c++, the length would also be 6. You would divide the length by the length of each value to get the value length. In the above diagram, the value length is 2 (there are 2 pieces of memory for each value). The block length is 6 (total memory in block). 6/2 = 3 (this is the number of values in the block).

A block that only has 1 value in it is called a scalar. A block with multiple values in it is called an array. Why make a big difference between the two with the names? Because that's how programming languages are designed. A scalar is just a special case of an array. It would be an array of length 1 (a memory block of length 1).

When you program, you only ever work with scalars. The scalar stores the location of the memory block (its starting position). From here, you can add to the scalar to get to any other slot in the block. For example, in order to get to the first slot in an array, you would add 0. To get to the 5th slot, you'd add 4. Why 4? Check out the following diagram of some general block of memory with 31 values. The positions of the values are labeled relative to the block's address (its position in memory). This means that the 0 here is not 0 in memory, it's 0 + block address. 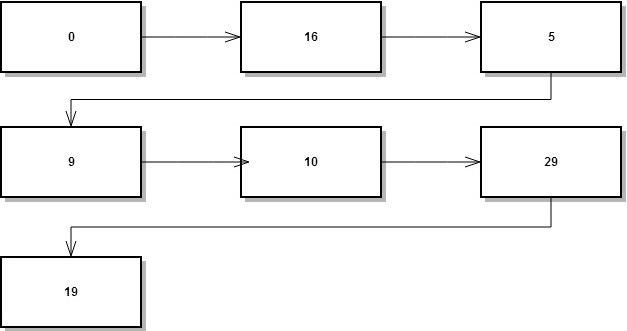 This is what is called a linked list. It's linked because each thing in the list tells us where to go to get to the next thing. It's singly linked because there is nothing pointing back. This is actually how linked lists are done in JASS. You use lots of blocks of the same size. One block will give you this road map (the linked list), the next block might give you a value, and so on. A third block might give you the road map in reverse (how to go backwards). If you know how to go forward and backward, that is called a doubly linked list.

So here is the JASS way of doing linked lists 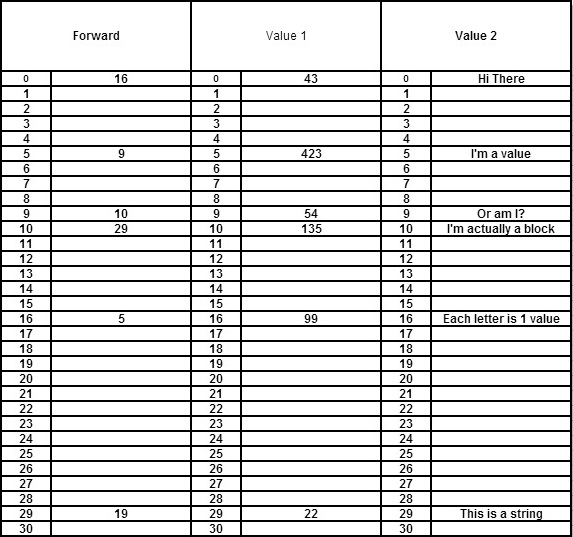 Languages like c++ let you create blocks of whatever on the fly of whatever size you like. This is mostly how c++ does linked lists. In a c++ linked list, only 1 value is ever stored. The value points to the block being stored in the list. Notice how these linked lists are limited by computer memory. In JASS, they were limited by the size of the parallel arrays. They also only take up as much memory as needed. In JASS, there was a ton of unused memory. You would be storing 0 (the position of the first block in the list). Really, you would actually be storing a block that pointed to the first block in the list. 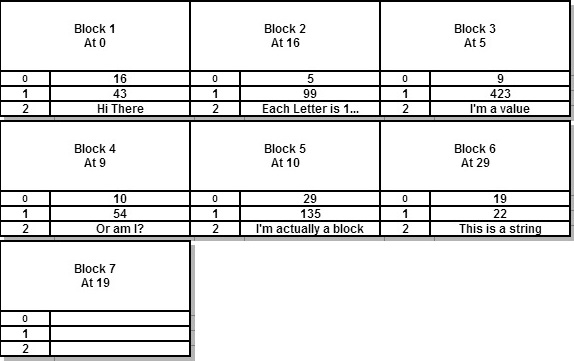 Lists are very powerful. Many times, a programmer will not know how much storage they will need for their data. In a game, data is continuously added and removed.

Here is a list of most data structures: http://en.wikipedia.org/wiki/List_of_data_structures. You should strive to learn all of the data structures in that list.

Now that you know about memory and the basics of how it can be used (besides just storing values in it), you are ready to learn about code execution and the various ways to control the flow of how the code is executed.

Executable data, just like non-executable data, is stored in memory. It is always stored in a single block of memory (not really, it's a bit complicated in the background, but whatever). The CPU stores a counter, which is the current instruction it is on. It just executes the current instruction and increases the counter. It moves forward in this way forever. If you had a block of memory from 0-31, it would execute all instructions in that block and even move past the 31 and start executing random data. Instructions are just numbers (the CPU has a huge table of instructions and you give it a number for what instruction you want it to execute). As a programmer, we don't have to worry about the CPU too much, but it does help to know how it operates so that we know about the basics of code flow.

If we had a set of instructions

they would be executed as follows

After 4, it would stop. This is thanks to the nice operating system and Warcraft 3. They don't let the CPU spin out of control and blow up.

If you were to write a program, that program's instructions would be executed line by line. A compiler reads your file and translates it into a raw set of instructions. Warcraft 3 sorta does this for JASS.

Most of the programming stuff that people use are actually sets of instructions (one instruction for you in a language is translated into many instructions). This is to make our lives easier. You wouldn't want to write 10-20 lines of code to do 1 simple thing, right? Especially when those 10-20 lines are the same every single time and you have to write them over and over and over again. It gets annoying. That's why languages are made. vJASS was made so that we wouldn't have to work with fugly raw parallel arrays, triggers, and so on. You saw those blocks for a list. Imagine if you had 500 of them in a map. Now you have to search through 500 different blocks and try to remember what blocks go with what. Yea, not fun.

One of the most useful instructions that a CPU has is a jump statement. This lets you essentially set the program counter. In effect, you can jump from one line of code to another line of code. Besides this, the CPU also has conditional jumps, meaning that if a condition is true, then you do the jump. These two things put together will define all of our instruction flow. 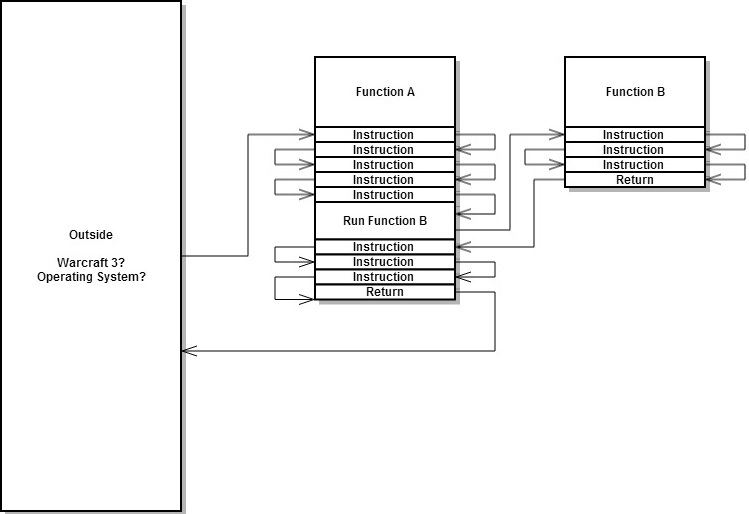 What if you wanted to somehow give a function a set of values to work with?

And then maybe, when it returns, it gives the calling function the eggs.

How would this be done? Remember, you have a bunch of memory to work with. Let's say that every function has a block of memory for it called Parameters. You store your values into this block and then call the function. When the function finishes, it has another block called Return. It stores whatever values it wants to return into this block and you, the calling function read it. This would be one way to do it. The cool thing is that programming languages do all of this for you automatically in the background, so you don't have to worry about it. You just have to let everything know what the function takes and what the function returns. 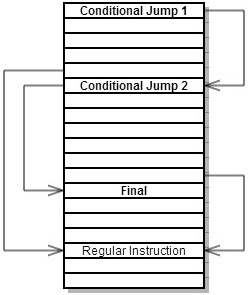 The final type of flow that this tutorial will be covering is the loop. It jumps back to a first instruction. Within the loop, you can place what is called a break. A break jumps outside of the current flow. For example, in those if statements, it would jump to the regular instruction. Most languages only allow you to break out of loops and what are called switch statements. 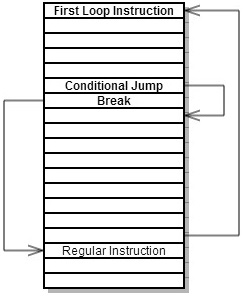 You should now be capable of studying the syntax of a language of your choice. I recommend JASS followed by c++.

After you get through trees, start learning algorithms (continue and finish data structures)

After algorithms, start on design patterns

Finish learning the 5 languages and all of the stuff above.

next, study computer architecture (study verilog and c too)

Start working with a team on some open source project (check github or some other site). You should know how to use svn and git. Be sure to significantly contribute to at least 4 projects that are not your own. This will get you used to working with others and teach you about the stages of software development.

After you do all of this, you should be a master programmer. You'll then be able to specialize in a specific field and you'll be able to work on research to expand that field.

Very informative, specially the low level concepts, reminds me of asm and bytecode.

Icons 1 Tools 1 Spells 4 JASS 4 Tutorials 9
It is pretty informative and insightful for understanding how computer programs are interpreted.

But the ending is rather bleak. Has anyone learned that way? Who is the intended audience?

Where to go from here?

Then I just put that up there if people want to continue studying past this point. They'd have to do a lot of their own research or take classes .

The end part should take you a few years to complete. Probably 4-5. Whoever completes it will be a super programmer >.<. They should also study physics and math :\. Studying simulation physics alongside physics would be very good.


The intended audience is people that know nothing about programming but would like to learn . This tutorial takes the approach of syntax being a different issue from programming.

This tutorial does cover a lot very quickly, but by covering it this way, people won't be bothered later by pointers, passing by reference vs by value, and so on. They won't even have to worry about all of these things that universities normally teach because they will understand it intuitively as they have this good foundation to work off of.

Spells 16 Tutorials 2
I like this. Will hopefully be able to read through it soon.

Note:
I have done plenty of programs now in C# but never really new how the memory worked. I knew the very basics. Thanks for this.

Icons 1 Tools 1 Spells 4 JASS 4 Tutorials 9
I meant to approve this for a while. It is just on temporary hold since I have to attach the images to the hive. So, sit tight for a bit.

EDIT: I decided to get the process over with now. Approved.
You must log in or register to reply here.

[JASS/AI] Programming with the Collections Framework