Help for StarEdit, and one question

I was about to make an optional objective where you free Terran units by destroying the mature Crysalis'. But I don't know what are the exact triggers for that.

and also does the maps that are made in version 1.16.1 also works on latest versions and remastered too? (it's not modded tho)
Last edited: Apr 18, 2019

You're going to need to provide more details on your problem if you want a decent answer.
This answer is written on the assumption that you want:
1) A player to receive some Terran units
2)That are already present on the map
3) Upon destroying a Chrysalis

And yes, if a map is made using an earlier version of StarCraft but does not use mods or EUDs or certain map protectors, it should work with the latest version and remastered. That's why creators don't have to remake maps from scratch every time Brood War gets patched .
Last edited: Apr 20, 2019

well, the problem is, I can't see a condition where the players suffered deaths at location. it only has a deaths condition.
Last edited: Apr 20, 2019

Also... how can I make the AI zerg use nydus canals with triggers?

I always thought this was the case

But it never worked.

The AI can neither use nor build Nydus Canals in SC. You're out of luck.

What exactly do you want to happen on your map, why, and what do you want to set off the Nydus rush? Depending on these things, there might be similar workarounds using trigger magic.
Last edited: Apr 21, 2019

Well, I was gonna make a scene where a marine and his dark templar friend was surprised by the zerg, it turns out that the zerg that attacked them came from a nydus canal, so the player must destroy the nydus canal to prevent more zerg units from attacking. but thanks anyway.

In that case, here's what you can do. This will give the computer the appearance of using a pre-placed Canal, which seems good enough for your purposes.
Firstly, you place a Nydus Canal wherever you want it to be. Then, make a location around the Nydus Canal, make it a bit large. At least this large:

Then, you can create the following Triggers.

CONDITIONS:
[Whatever you want to actually start the attack, whether that is the player building a few units, a certain amount of time elapsing, a switch being set or cleared,or bringing a unit to a certain location]
ACTIONS:
Set switch "Rush"


CONDITIONS:
"Rush" is set. [This trigger is just labelled "Switch" in the editor]
(AI Player) brings at least 1 buildings to "DOOMTUNNEL"
ACTIONS:
Wait for [Some amount of time, if you want there to be a time delay between waves of Zerg. If this action is absent, Zerg will just pour out nonstop with absolutely no delay]
Create [Desired Number] [Desired Unit] at "DOOMTUNNEL" for (AI Player) [You can use this action multiple times if you want there to be a few different units.]
Play sound\Misc\IntoNydus.wav
Issue Order to all men owned by (AI Player) at "DOOMTUNNEL" attack to "OHSHIT"
Preserve Trigger [This will cause the Trigger to execute continuously as long as the conditions are met. If the "Preserve Trigger" action is absent, then the Trigger will only fire once and never fire again].

This trigger will cause Zerg to appear at a Nydus Canal and attack a certain area once something sets it off and for as long as the Nydus Canal is alive.

Now, you need to import sound files to your map to actually use the play trigger. To do this, you go to Scenario>>>Sound Editor in your map editor. Then, look in the "Available game sound files (Virtual Sounds) box that appears. It should be the bottom one. 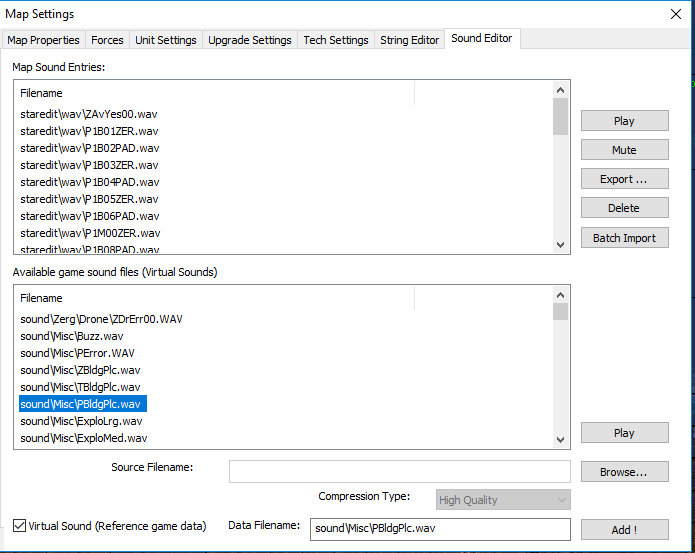 Find the IntoNydus file, click it once so that it is highlighted in blue, then click the "Add!" button. Now you can play it on your map.
Last edited: Apr 21, 2019

Maps 1
Just note that the play sound trigger would make it play for the player even if their screen was elsewhere. You can't detect screen position in SCBW (maybe with EUDs, not sure) so what I'd do is set a death or a switch instead of playing the sound, then use another trigger to detect that death/switch being set and play the sound IF the player's units are in a wider location around the Nydus (to simulate them being in earshot). If you wanna get real creative you can add a switch when you use the 'mute non-trigger sounds' action and have a copy of that trigger that plays a quieter version of the intonydus.wav.


Alure155 said:
The AI can neither use nor build Nydus Canals in SC. You're out of luck.
Click to expand...

You can tell the AI to build them by modding the AI.

Is it possible to use the MOVE UNITS AT LOCATION trigger to simulate the Nydus canals?

Maps 1
Sure, just have a location around the nydus entrance/exit and do `Current player brings at least 1 nydus canal to "entrance"` and `Current player brings at least 1 [men] to "entrance"` for the conditions, then move them to "exit" and preserve trigger. You'll only be able to reliably do this as a one-way teleport, though, unless you feel like getting really silly.

One last thing... I'm gonna make a hero mechanic from Heart of the Swarm where if the hero dies he will be revived on a nearby hive cluster. What are the exact conditions and actions for that?

Maps 1
First thing to note is that you have no simple way to pick the closest town hall to the hero. Starcraft will find a matching unit that is the closest to the upper-left-most tile of the map. If your player is zerg, you further complicate things since their town hall can be one of three units. There's probably a simpler solution than this, but here's my quick and dirty set. I'd recommend including hypertriggers in your map to make sure the countdown timer window is handled properly, but otherwise it should work out of the box.

Trigger 1 - Move respawn location to hive IF there are no town halls in that location.

Maps 1
My system should default to hive first, then lair, then hatchery.

Hypertriggers can be run for any human, computer, or rescuable player that don't have any wait trigger actions. So where you run them, just don't have any triggers that wait.
You must log in or register to reply here.