Maps 1
During their last battle above Char, The Terran and Protoss fire a jointly-developed experimental super-weapon at Sarah Kerrigan, the Queen of Blades.

The blast unexpectedly tears a hole in space-time, launching Kerrigan and her Zerg out of the Korpulu Sector.

Follow Sarah Kerrigan on her new journey as she and her brood wreck havoc on the Warcraft III timeline. 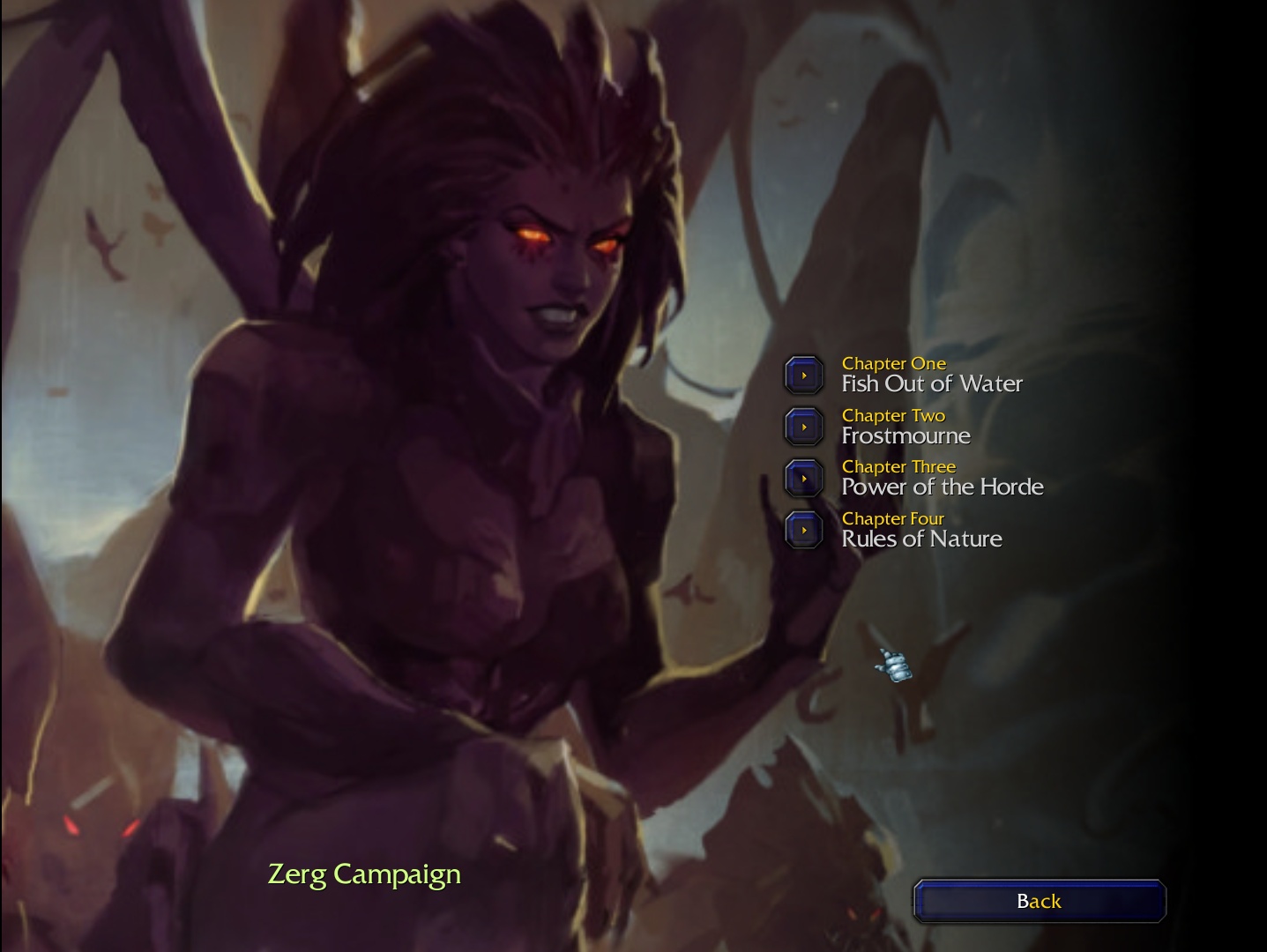 -------------------
All Zerg from StarCraft: Brood War are available. Their stats have been adjusted in order to play nice against the War3 races, but their functionality remains intact.

They harvest Gold and Lumber like War3 races, and build Extractors over Gold Mines to use them.

So far there are five missions. More will be made as time allows.

Big cinematics are not within the scope of this project. The plot will be fairly light.

This project began by combining the efforts two ill-fated StarCraft-themed projects in an effort to fully realize the Zerg in Warcraft III.

Warcraft vs Starcraft was used a base for core Zerg functionality, such as Creep, and how units are produced via Larva, as well as some of its assets.

Assets were then imported from Project Revolution, because I prefer Brood War over StarCraft II. They weren't 100% complete, and I had to add sounds to them, but they look the part well enough.

Afterwards I went to work on getting all Zerg units and their abilities from StarCraft: Brood War faithfully represented in War3. 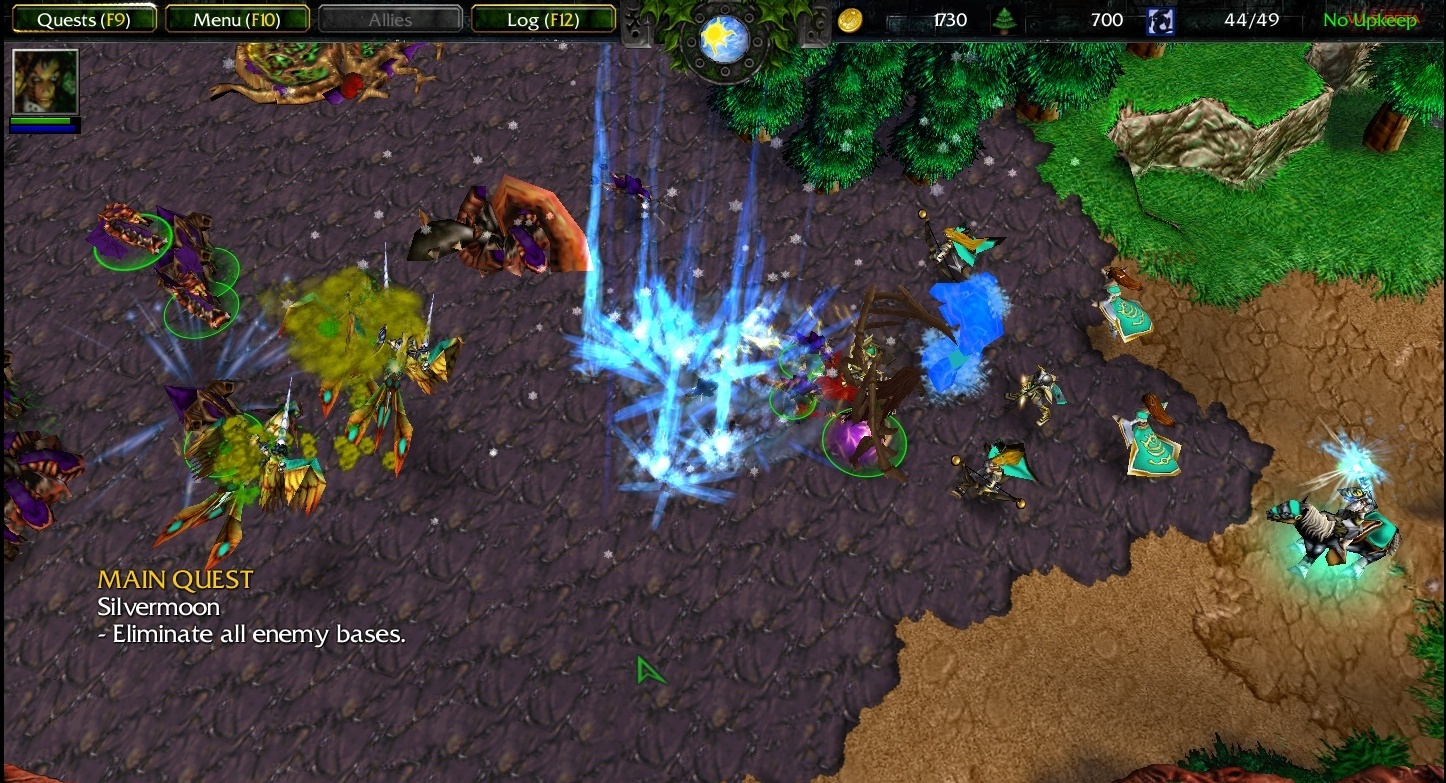 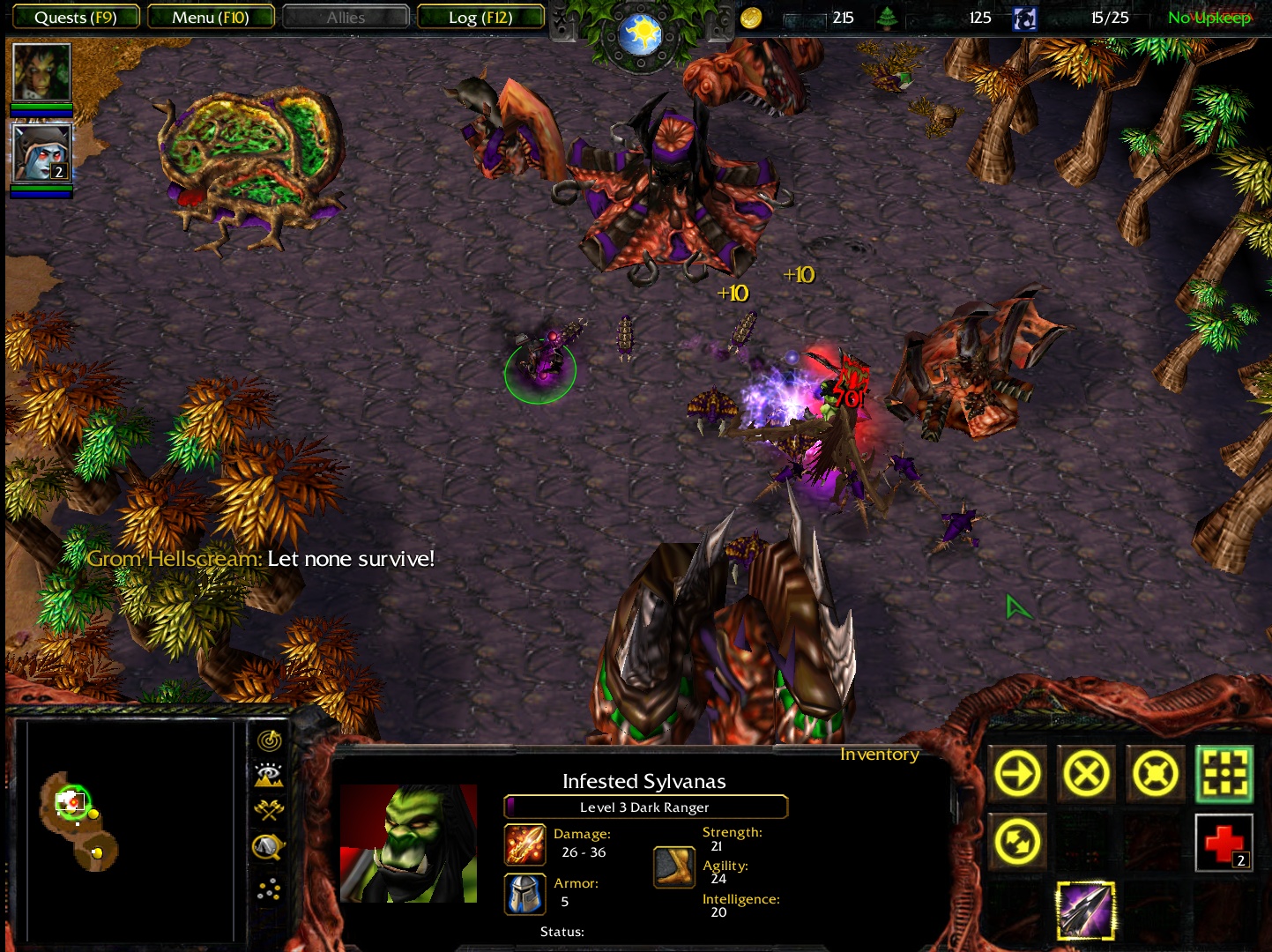 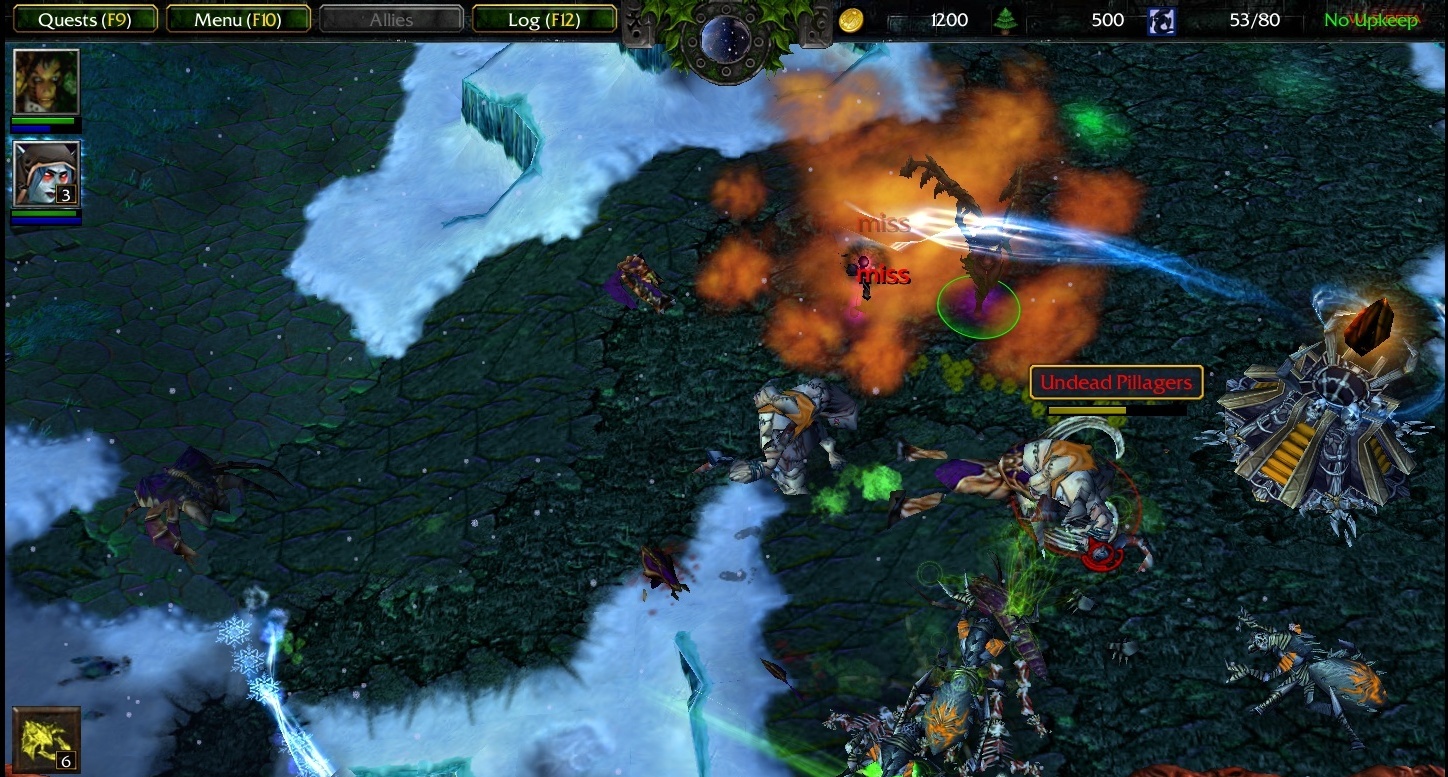 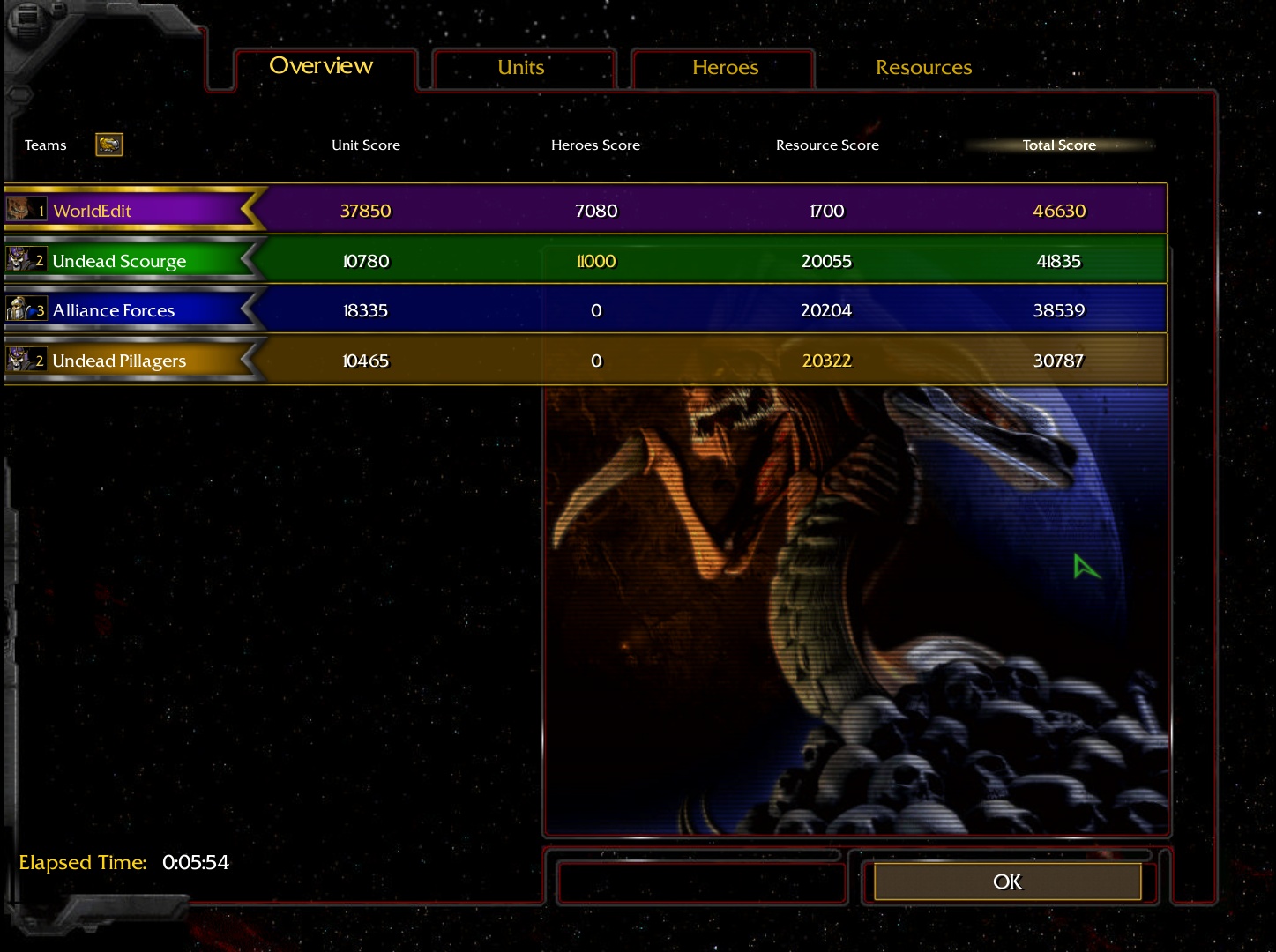 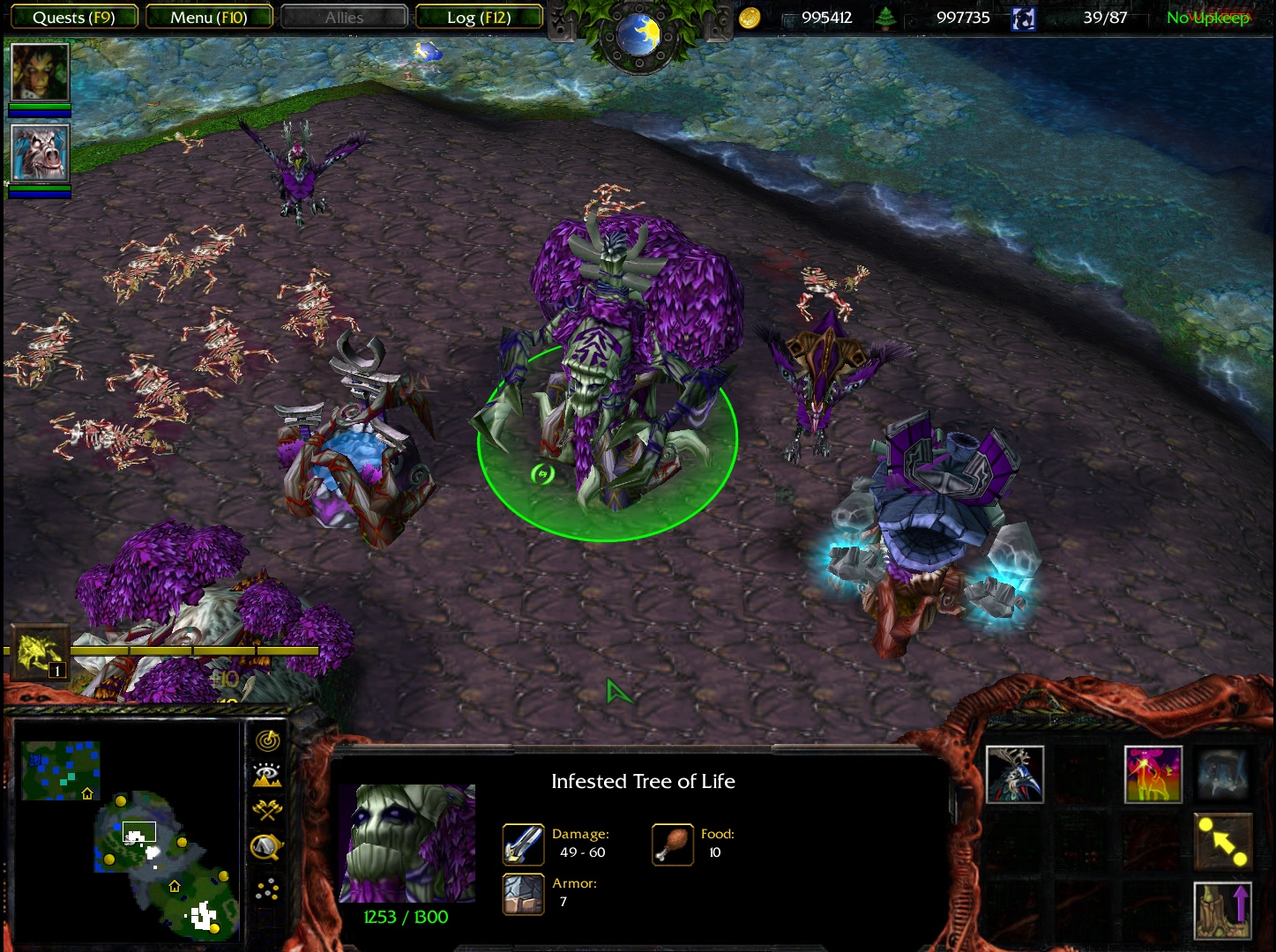 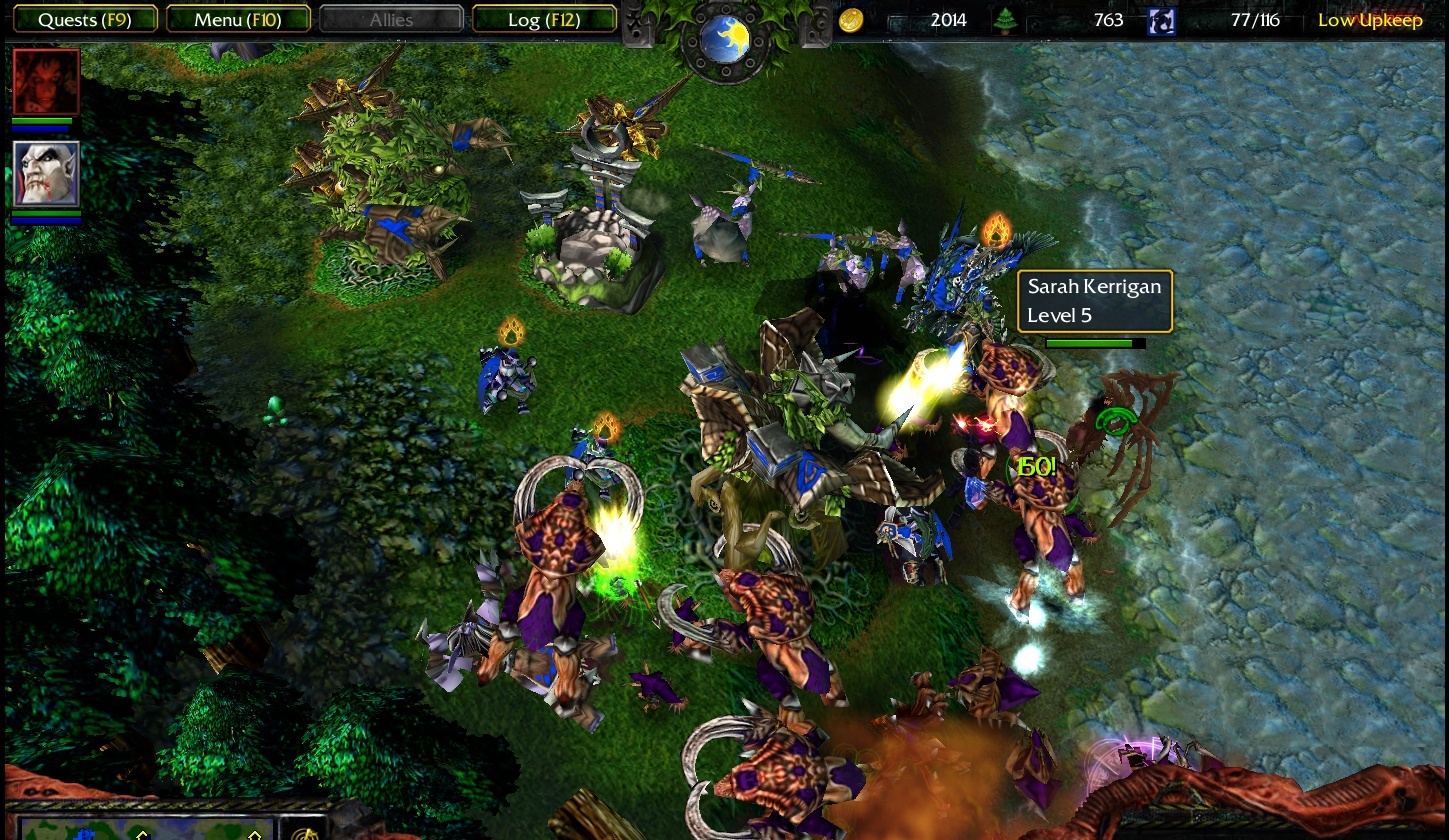 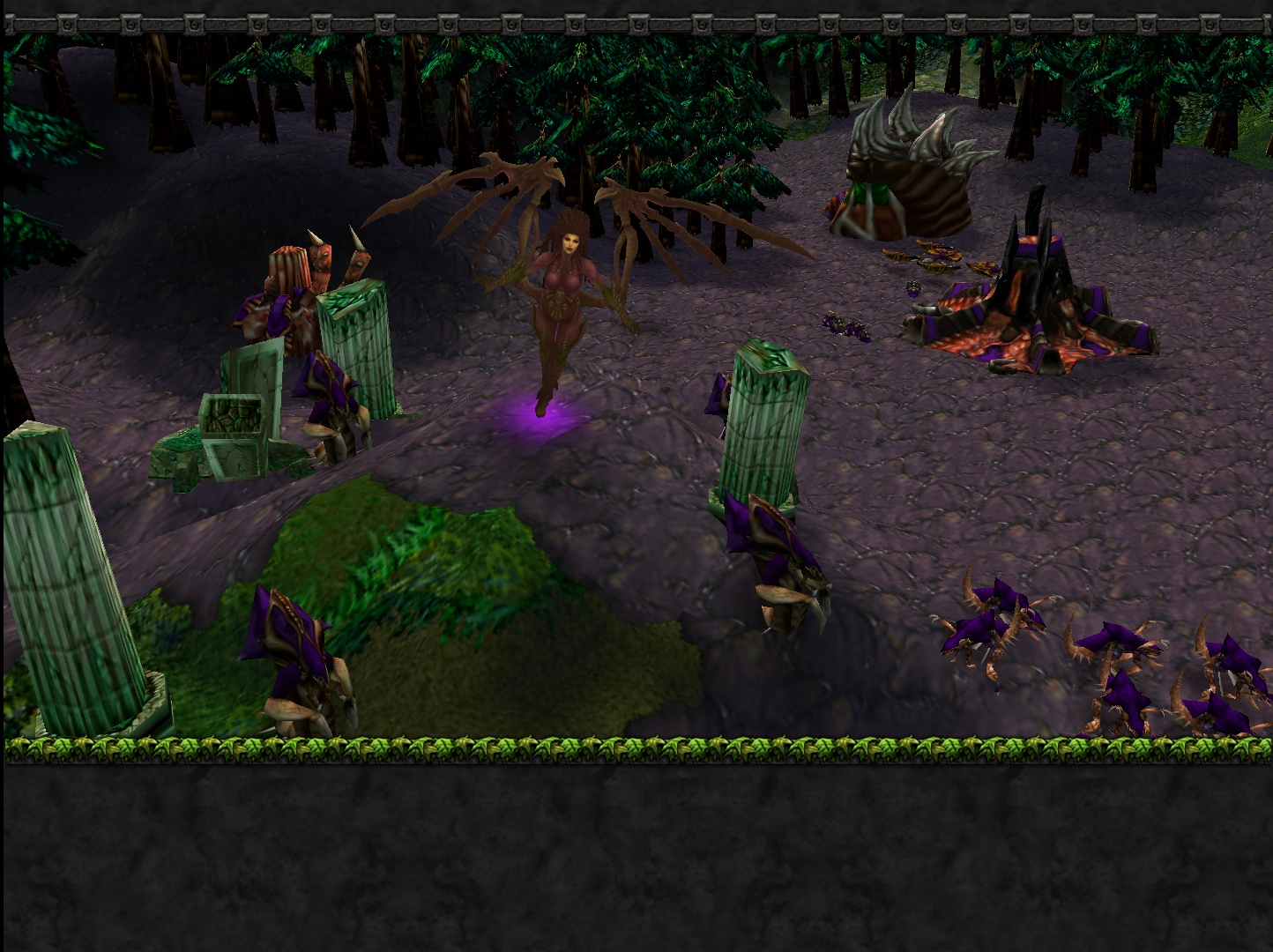 Maps 1
Update!
No new missions yet, but many fixes and improvements!


Bug Fixes
- Fixed Drones being unable to build if Custom Keys were enabled. It is still recommended to keep them off though, as some tooltips may not match up with their hotkey if Custom Keys are enabled.
- Fixed Drones stopping harvesting if a Lair or Hive upgrade finished while they were en route to return gold to it.
- Fixed issues with the Zerg Extractor. It will retain the amount of gold of the mine it's built over, and the gold mine under it will also have the correct amount when the Extractor is destroyed.

Art/Effects Changes
- Imported assets for the score screen and cursor from Project Revolution.
- Added missing attachment points to the Zergling, Mutalisk, and Kerrigan models, so that spell/weapon effects appear on them.
- Kerrigan's model is a little unusual, although I thought I set the attachment points correctly, they all (except OverHead) appear at her origin point in-game for reasons unknown.
- Fixed missing Hydralisk death animation.
- Fixed missing 'goop splash' effect Queen's Snare.
- Queen's Snare buff art has been changed to the war3 poison buff art. This was due the Project Revolution ensnare buff model being kind of buggy on many units.
- Increased the animation speed of Dark Swarm.
- Plague now more closely resembles its StarCraft counterpart, instead of Disease Cloud.
- Devourer's Acid Spores now use the same buff art as Plague, but colored purple, instead of using the Howl of Terror buff art.
- Fixed Zerg structure birth effect model persisting for a few seconds after a building under construction is cancelled or dies.
- Fixed missing zerg structure birth effect model for upgrading creep colonies and spires.
- Adjusted the Lair model so that it more closely lines up with the Hatchery and Hive. This should fix the noticeable positional 'shift' the Hatchery made upon evolving to Lair and then to Hive. It wasn't actually moving, it was just inconsistency between the models.
- Slightly increased the Hatchery's model scaling value, again to make the jump to Lair less jarring.
- Reduced the size of the white blob under the Queen's Nest model.

Other Changes
- Wind Walk tooltip no longer refers to Kerrigan as 'the Blademaster'.
- Infested Sylvanas' Black Arrow replaced with Brood Arrow. It is functionally the same, but summons Broodlings instead of Skeletons.
- Zerg Eggs armor type changed to Medium from Fortified.
- Increased Queen flying height so that they aren't hard to find after finishing an Infestation.
- Reduced Ultralisk lumber cost to 150 from 200.
- Plague no longer affects the caster.
- Error message text when not enough food changed to 'Spawn more Overlords'.
- Removed extra/unused players from score screens.
- Fixed some missing effects in the Mission 2 victory cinematic.

Maps 1
Chapter 3 is now available. Challenge the might of the Orcish Horde!
This update also contains some balance changes and bug fixes.


Chapter 2 Changes
- Sylvanas and other infested heroes will be saved seperately for each difficulty. If you only have her saved in a previous version of the campaign, she will load regardless of difficulty in Chapter 3 for backwards compatibility.
- Orange undead base will rebuild their defenses less.
- Kerrigan will revive for the victory cinematic if she is dead.
- Fixed a typo in the 'Frostmourne' quest.

Infest Town Hall Fixes
- Will now be in the same button position regardless of autocast being on or off.
- Queens will now turn off autocast on Infest Town Hall once they start casting it. This to prevent error message spam if an invalid target is chosen.
- Fixed multiple different errors appearing at the same time if an invalid target is chosen.
- Queens can no longer enter a Town Hall that is already being infested.
- Corrected the tooltip on the Infested Town Hall's Improved Lumber Harvesting upgrade.

Zerg Structures
- Birth model changed to the newer Project Revolution one that has more complete animations.
- Birth model now angles properly on slopes.
- Only the Birth model will be shown while a structure is upgrading, as in StarCraft.
- Fixed structures not being clickable while under construction.
- No longer use the Night Elf rally point.
- Fixed creep generating off-center.
- Fixed creep generated by Extractors not being removed when they are destroyed.
- Extractors will now display the correct gold amount while under construction.
- Fixed a typo on the Spawning Pool tooltip.
- Corrected the Spore Colony's projectile launch and impact positions.

Hatchery
- Fixed the bug that sometimes prevented the Select Larva button from working.
- Fixed rally point not working when set to a unit most of the time. Occasionally, it still happens.
- Fixed Birth model persisting for a while after upgrade to Lair/Hive is complete or cancelled.
- Fixed debug 'create' message appearing when selecting a newly-created Hatchery.
- The icon for a Hatchery mutating into a Lair is now the StarCraft 1 Lair icon, rather than SC2.

Maps 1
Chapter 4 is now available. Venture into Ashenvale to take on the Night Elves!


General Improvements
- Improved the campaign menu screen so that the chapter names are easier to read.
- Going forward, each update will reset the available chapter buttons on the campaign screen. To restore your previous progress, you need only start Chapter One, then quit, then you can continue from where you left off.
- Decreased the volume of UI sounds and Zerg Ready sounds to be more in line with their war3 counterparts.
- Fixed Chapter 2 not being completable if the Frostmourne quest was completed before the Mal'Ganis quest.

Lurker
- Fixed Lurkers taking too long to switch targets when ordered, causing them to miss more often than not.
- Increased spine area of effect to 70 from 64.

Defiler
- Adjusted the Dark Swarm model so it matches up better with its effect area.
- Dark Swarm radius increased to 400 from 300.
- Plague radius increased to 300 from 250.
- Hopefully fixed Consume sometimes not working.
- Multiple Defilers can no longer Consume the same target.
- Fixed Metasynaptic Node upgrade tooltip saying it gave 0 mana.

Hatchery
- Fixed rally points not being respected if they were set while under construction.
- Now appears before infested structures in selection priority.
- Now uses the generic zerg structure death animation, as their existing one was incomplete.

Other Building Fixes
- Corrected pathing maps.
- The terrain left behind when a creep-spreading structure dies will now depend on the map.
- Fixed missing death animations for Zerg buildings in Chapter 2.
- Fixed Creep Colonies and Spires turning invisible when cancelling an upgrade.
- Spawning Pool, Queen's Nest, Ultralisk Cavern, and Defiler Mound models have been adjusted to be closer to the shape they were in StarCraft.
- Spawning Pool and Infested buildings now use the same rally point as Hatcheries.
- Halved the delay between the Sunken Colony's attack and its target being damaged.
- Fixed some Extractors in Chapter 3 not having the right gold amount when built and leaving a full gold mine when destroyed.
- Fixed Extractors leaving a gold mine with 10 gold when they collapse.
- Removed white blob from under the Queen's Nest.
- Fixed Greater Spires not being clickable.

Special thanks to birdius for providing a new model for the Zerg Hippogryph Rider!


Chapter 4 Fixes
- Fixed Night Elf infestation not being saved. Unfortunately, if you completed Chapter 4 on the previous version of the campaign, you will have to re-play it, infest a Night Elf Tree, and complete the chapter if you want to have access to Infested Night Elf tech from the start of Chapter 5.
- Fixed the AI failing to research their intended upgrades and producing an unintentionally low amount of units.
- Fixed 'Main Quest Completed' message occurring multiple times. (Also applies to Chapter 3).
- Fixed the chapter not being completeable if Cenarius is killed after all of Maeiv's structures have been destroyed.
- Fixed Cenarius talking after he is dead.
- Fixed heavy lag sometimes occurring if many Lurkers attacked at the same time.

Dark Swarm
- Ranged units with splash damage will now deal damage to units under a Dark Swarm, as they do in StarCraft. One side-effect of this is that units whose splash normally only affects enemies will instead damage all units in their area of effect under the Dark Swarm.
- Units whose splash damage is granted to them by an item (such as Orb of Fire) will still not damage units under Dark Swarm.
- The Dark Swarm effect will now appear above most ground units, instead of clipping into them. Added some transparency to it as well so the units under it will still be visible.