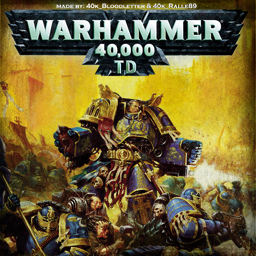 - made units hit by Move! act another way
- changed Robi to 4g.krieg in tips
- reduced price of autobanking to 10 gold from 20 (yay)
- added command for people who are only going to host the map, "-host"
- changed movement system but not the moving path
- imported a new balance spreadsheet (can cause many unbalanced units)
- reduced units movement speed
- added "order all towers to attack one unit"-function, just click on a target
- added "space-follows-builder"-function, press space to go to last selected builder.
Probably not a complete list..

Damn. When the bloodletters come at level 30 you get your as kicked else really good TD

Tools 4 Maps 11 Sounds 1 Tutorials 14
@cetrax you think they should be made less powerful??

Maps 1
no they are even too easy

Tutorials 1
hmmm, would it be hard to make a system where u can add a modifier to the spawns of a unit, to change a units hp each round. like u have (number of creeps killed)/(average time to kill each) then multiply that number by a units starting hp? btw i made that sum up on the spot so it wouldnt work, but its an idea. also it would only affect one players spawn and the (number of creeps killed) would be limited to 30 or however many spawn at the start of each round.

@Ralle. Nope i discovered that they can be killed easily with Challenge.
Just made it to the cows and then i died

Some Races are unballanced. Dark eldar owns hard with it's web + challenge abillities. Also Tyranid is really good because the web ability is very important later on in the game.

Tools 4 Maps 11 Sounds 1 Tutorials 14
OK.. In this version the damage, range, splash and price is ballanced but without thinking about abilities. That's the next step

Tools 4 Maps 11 Sounds 1 Tutorials 14
@GST_Nemisis somehow that works. We once used it with handicap so handicap was increased each level but it has a max value which we couldn't exceed so we stopped doing it that way..

Maps 1
@cetrax: web is useless in the last 4 levels and challange u cant use against burning cows cause there are too many. i ll upload a replay where i complete it on normal at 5 spawns but atm i have no time

Can we look forward to an update any time? I havn't seen a new version in a long long time

Tools 4 Maps 11 Sounds 1 Tutorials 14
well... Neither have I... If I shoud make a new version it would just be a few bugfixes.. I am not really working on it atm.. and havent for a long time

This map is quite IMBA. Played with 8 spawns solo . I had like 30 bloodthirsters, 1 Defiler, 10 obliterators, 3 daemon princes etc. Still could not accomplish the map...

This map is quite IMBA. Played with 8 spawns solo . I had like 30 bloodthirsters, 1 Defiler, 10 obliterators, 3 daemon princes etc. Still could not accomplish the map...

Tools 1 Maps 2
me and a friend beat it just now on normal using the second race (forgot what its called but it has masters of blades) i was in red posistion and he was in yellow this way we could get any leaks one of use had, and we beat it without losing any lives until that last level with the cows lol damn those cows are crazy strong, really good td tho hadlotsa fun figuring out how ta beat it heh
You must log in or register to reply here.