Hey, it was about time someone tried doing something diferent , and this idea is great.
And since i liked it so much i justed wanted to help in anyway possible so i will try to give some ideas...btw i am a terraner, so i will try helping in this area =D

So i have a suggestion for an area of the map, it s of a like ancient city (or just old) and the quest could be related to a religion...(if u guys like i can develop it a bit more =D) 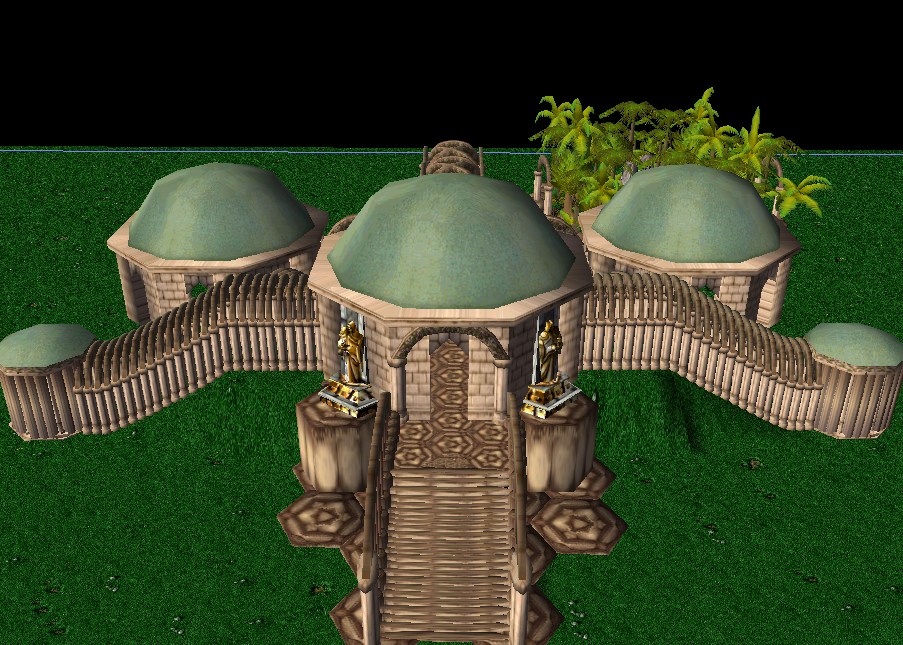 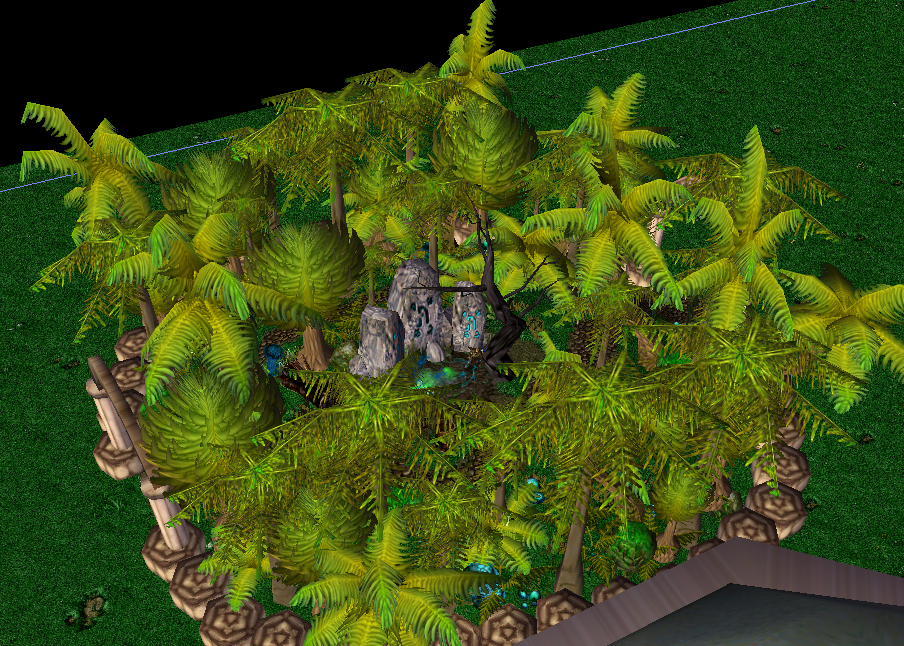 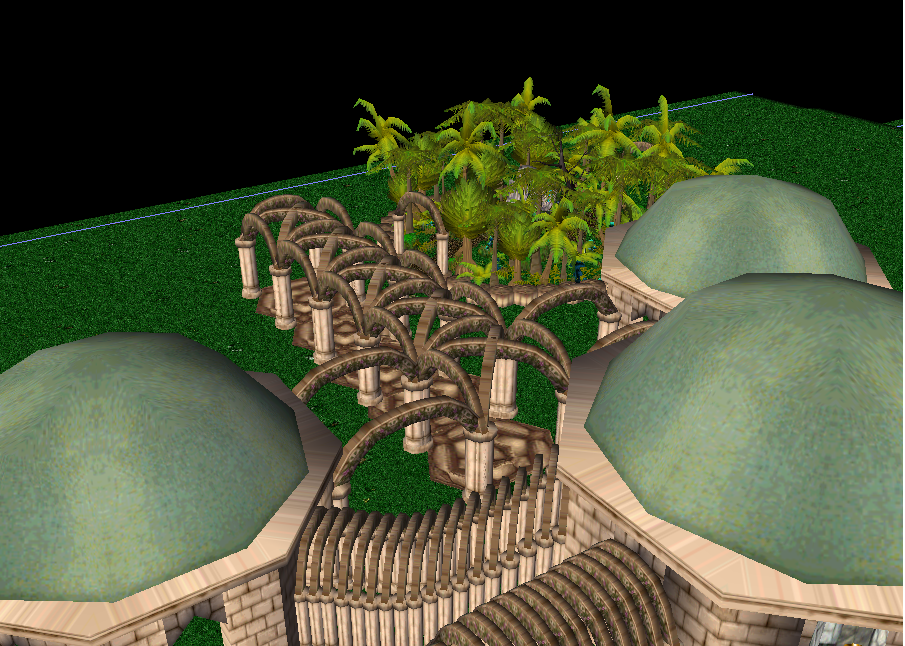 i made this very quickly so it s very empty but you can have an idea of how it will be.And at the end could be a giant library maybe for quest and spells...

Keep with the good work u guys, anxious to play this map xD

Hagge5 said:
The lower part of the custom UI I've been working on is pretty much done.
Here's a preview:

Spells 1
I kinda like the UI and I really like how the grass "shines". But I think at the minimap part that you should shade the brown paper or whatever it is abit more, because it looks abit too cartoonish but thats just my opinion of course its up to you.

Also sverkerman I can't wait for that castle, I wish I had skype but unfortunately I can't install it.

Maps 4 StarCraft II Resources 1
i saw it, and its huge o.0

Maps 7
I got 2 huge parts left to do on the castle. After that I will show you some preview images of it.

Catch_ya said:
I kinda like the UI and I really like how the grass "shines". But I think at the minimap part that you should shade the brown paper or whatever it is abit more, because it looks abit too cartoonish but thats just my opinion of course its up to you.

Also sverkerman I can't wait for that castle, I wish I had skype but unfortunately I can't install it.
Click to expand...

I will burn the edges of the paper, but I have to wait until the terrain is done, because I will use a minimap overlay in the same sheme, and It's edges needs to be burned aswell, so it will melt in.

Maps 7
Guess what? The beast is done.
Hands down, this was the most amazing piece of terrain I've ever created. It took me about 56 hours to compleate.

Images coming soon, I am currently taking them/uploading them. This post will then be edited with the final result.


EDIT: My internet it currently limited. I cannot upload the images due to it taking up to 5 hours. Expect them in a few days.

i cant get connected to sverkerman, but he told me to show you some pictures :/ so here we go

i cant get connected to sverkerman, but he told me to show you some pictures :/ so here we go
Click to expand...

Lol, one picture?
Nevertheless, this terrain is truly epic, 2500 doodads packed into one big awsome.
Salute to Sverker!

EDIT:
Just so everyone understands, that was barely a room, and this mansion got 11 rooms+one big garden in the centre!

Maps 4 StarCraft II Resources 1
i can upload more, but i dont want to overupload makes it less exiting

But he imported so many Sh!t's right?

Maps 4 StarCraft II Resources 1
yep, but theyre making it bigger when they need to, currently the file i got is 256x256

so the guy with white text said that sverkerman said he made it 400x400, and gamer said its 256x256, and now sverkerman said he MENT 265x265, so goin once, going twice hahaha srsly who cares whats the size of the map? the file size is what counts DOTA allmost has 8 MB thats because they imported a HD version for every icon they use.. sooo sverkerman any news regarding a public testing?


Yes, everyone with our supporter sig will be added into our randomizer machine.

The machine will then select 8 random supporters to be invited to beta testing.

You do know that atm there si 6 people with supporter sig that commented at least once?

Maps 7
We have 3000 hits so getting more supporters should not be a problem.

*Waves at EVERYONE that reads this message*

I'm gonna make a list for all the people that wants to beta test Truevision. If you are interested give me a small PM, letting me know so that I can add you to the "randomizer".

I will add this to the main thread

Skins 1 Maps 4
The games first quest is done.
There is now a "startup" screen.
Most issues in all systems are fixed.
Fixed all GetLocalPlayer that would cause desync (I think).

In other words, It's starting to look like a game

Its good to hear that.

Skins 1 Maps 4
We both felt that the current combat system was too determinated by luck, rather than strategy. I'm remaking the combat system into a class-based fight of the similar kind with about 8 spells per class.

Will delay the map a little bit', but we'll save development time in not having to create a ton of abilities for the magic proffesion.

How many weapon/armor slots?

Burke said:
How many weapon/armor slots?
Click to expand...

Four.
Mainhand, offhand, chest, head.
Sverker seem to wanna add another one, though.

Maps 1
Well that would be good since you have 5 slots? (1 is for going back to inventory menu)

Well..
Mainhand.. sure like sword spear or smtn
Offhand.. shield or a gun or smtn
Chest i would like to use word armor.. well what ever
Head.. helmet or smtn

I dont know why should be there anything else..

I started playing a certain game called "Spiral knight's" the game also has the same 4 slots like mentioned above, and i like that

Maps 1
but what if you have a wepon that requires both your hands? Or do those thing not exist?


... Unless we add pets that is. (which we prolly wont, atleast not for the beta.)

Maps 7
It is not my project.

It is mine and Hagge5's project.

Maps 1
So just a litle idea that came to my mind. Since I'm on alot of RP servers on wow I'm finding a speciall addon verry usefull. This addon allows us to write the characters history and allowing other people with the same addon see it. Just something that would be cool to see in Truevision ORPG.

lowe1994ba said:
So just a litle idea that came to my mind. Since I'm on alot of RP servers on wow I'm finding a speciall addon verry usefull. This addon allows us to write the characters history and allowing other people with the same addon see it. Just something that would be cool to see in Truevision ORPG.
Click to expand...

We'll sure, but then you would have to write it every game, kinda ruins the porpuse, eh?
Unless you can come up with a way to make a text become a longer text, there is no way to store something as long as that inside a savecode.

Seems kind of wierd, this isn't really designed for roleplay.

In other words: no.

I'd love to sign up for the betatesting. Couldn't find a good way to sign up, so I guess I'll just sign up here, if there's any problem I guess I could just tell a admin to remove it.

I'm currently a tester of The Kingdom of Kaliron ORPG
I have decent knowledge in mapmaking and might be able to see what causes a few bugs et.c.
I'm 15 years old, I have skype, I can be mature, If there's anything else you'd like to know just tell me.

lowe1994ba said:
Ok I understand why you wount do it since it would be a to long save code but you cant call it a roll playing game if it's not meant for role playing
Click to expand...

I wouldn't call Tkok or Teve designed for role playing.
What should we call it then?

Icons 1
This ORPG looks promessing so here is my support you bag of flees! +rep

It is an ORPG, it's not a RPG, they could call it strategy and have it right, it's their choice, and it's not a misguiding choice, if you think that just because it's called ORPG it should have every RP feature there is, then you should seek help. Immedietaly.

lowe1994ba said:
I have no idea and I do not say dont call it a orpg but there is a huge problem with making a non roleplaying friendly roleplaying game
Click to expand...

Online text-based role-playing games involve many players using some type of text-based interface and an Internet connection to play an RPG. Games played in a real-time way include MUDs, MUSHes, and other varieties of MU*. Games played in a turn-based fashion include play-by-mail games and play-by-post games.

Massively multi-player online role-playing games (MMORPGs) combine the large-scale social interaction and persistent world of MUDs with graphic interfaces. Most MMORPGs do not actively promote in-character role-playing, however players can use the games' communication functions to role-play so long as other players cooperate.[28] The majority of players in MMORPGs do not engage in role-play in this sense.[29]

Computer-assisted gaming can be used to add elements of computer gaming to in-person tabletop role-playing, where computers are used for record-keeping and sometimes to resolve combat, while the participants generally make decisions concerning character interaction.
Click to expand...

It clearly states that It is possible to role-play through the chat system, but mmorpgs do not necessarily need to promote role-playing.
(orpg is pretty much mmorpg without the "massive-multiplayer" part, so, same thing)

EDIT:
BTW, I'm going on vacation for two weeks, and when im there, I'm trying to enjoy the sun, and not map-make all day.
I'll probably be the one of us who works on the map then, though, since the triggers are currently behind the terrain and needs more work.
Things might progress a tad slower.
I'll have no internet connection.

Maps 1
Well anyway I think this as far as we'll get with this arguing so probebly I'll enjoy playing your mod, take care and have fun with your paradox
You must log in or register to reply here.

Tales of Avalon ORPG: An ORPG different from others...

A World Of Anime - ORPG