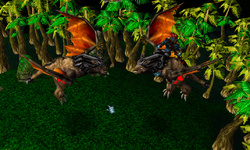 Due to my limited spare time i wasn't able to make many models recently. Luckily i managed to finish one of them. I already had made some time ago a Troll riding a manticore as an aerial unit, but to be honest i wasn't 100% satisfied about the result. So i made a new, (IMO) better version of this unit, one that significantly differs from the old one.

These are very powerful aerial units found in Troll armies, mostly in tribal ones. They consist of a Troll beast master riding and commanding a mighty manticore. Apart from dragons and alikes, most other air units would be well advised to avoid these mighty battle units! The large stinger on the end of the manticore's tail can deliver a deadly sting, while their fearsome fire breath can cause havoc to any opponent brave or foolish enough to engage it. Although they carry no armor, they are still more durable in combat than most other units and manticores are also reasonably fast. Usually they form the spear tip of Troll aerial assault troops, since they are capable of incinerating most other air units, like hippogryphs and can deter other ones from fighting. The Troll beast masters who are riding the manticores are usually of high status among their tribes and communities. The major drawbacks of this unit are its somewhat limited attack range and its high costs. But their power and abilities make it worth the investment!

After a lot of work i managed to finish the riderless (creep) version of the Manticore too. Originally i was planning to make a model + a separate portrait file, but later i changed my mind. I integrated the portrait to the actual model file, which also delayed the model's release.
Free (untamed) manticores are similar to the tamed ones, with the biggest difference being more unpredictable. They occur in a wide range of habitats although they generally stay more at warmer climates, especially where there are larger prey animals. Living is usually solitary or in small groups, especially when having offspring. Unlike most predatory creeps they don't always avoid settlements, often preying on livestock as well as on unfortunate villagers. Young ones are usually raised in caves, especially on hard-to-access cliffs and in other lairs, made often inside hollow tree trunks and other things, until they are able to fly. A good indicator for a manticore lair are bones and other food remains near the lair, so the wise adventurer would stay away from such places. A manticore's diet composes mostly of meat and partly on fish and sea food in coastal areas, although they also readily consume other food, like larger fruits. Prey is mostly attacked from above (through the air), most commonly by surprise. If the prey is very powerful or poses a danger to the manticore, it's usually hit with the poison stinger. The manticore than circles around the prey in the air, waiting for the poison to kill the prey or to weaken it, until it can deliver the finishing attack. Most common prey are pigs, boars, antilopes, deers and other herbivores, especially ones that can be easily carried away. But also mammoths and other large herbivores are taken on chance, few creatures are safe from these voracious predators.