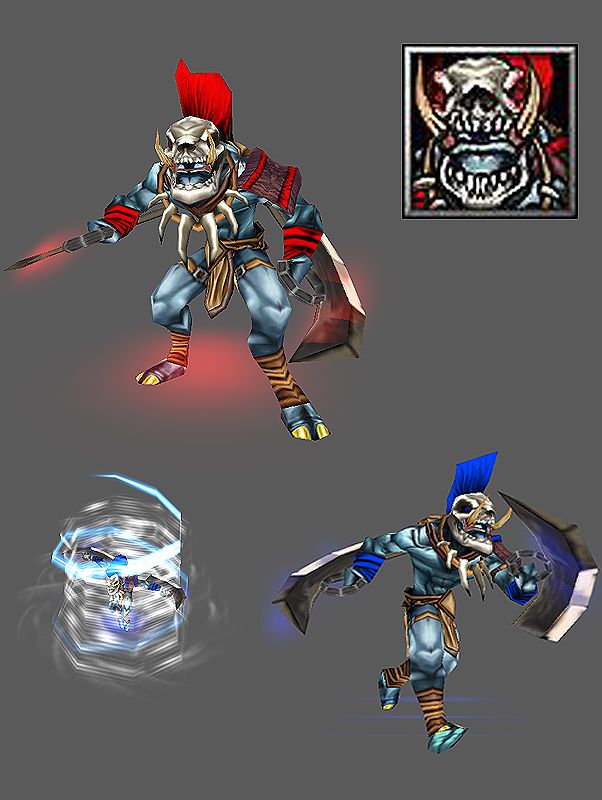 This bundle is marked as approved. It works and satisfies the submission rules.
View usage Statistics
Reactions: LISBOAH, Lord_Marrowgrath, Cokemonkey11 and 4 others
OMG grendul y is all of ur modles have skall helmets?

well you gotta admit, anything that wears skulls as helmets look badass.


Update:
-fixed some unconnected vertices on his arms that shows up during animations.


and some more updates:
-added hero glows. model is now currently a hero.
-also added a spinning animation much like the one blademaster has.
-ALSO added a talking portrait.

Keywords:
troll, predator, large, blades, to, compensate, for, something...
Contents

Something feels a bit off about the (Attack 1) animation, it seems like if it clips a bit into his own head. Not sure if it will look like that in game though.

Maps 4
Ahh, another model by the skull dude! Excellent!

Models 3 Icons 65 Packs 3 Skins 27 Templates 3
Are those the Beastmaster animations on it? It looks strange on it, a lil' bit tweaking would do. The level of detail on this is amazing (I couldn't expect less from -Grendel).
It's pretty.

The leg structure is too animalistic they resemble more a goatman or a satyr otherwise preety impressive.

I would also preety much like to see the animal to whom this skull belonged to.

Icons 1 Maps 1 Templates 1
OoOh.. This could work out as a Troll Bloodseeker.

Thats pretty cool. I love it!

Models 181 Icons 35 Packs 1 Skins 70
@DelmarVladek the clipping is not noticeable in-game unless you slow the animation's speed.

I just really like it. You have a way around models that just screams "WARCRAFT". The oversized super-blades, the massive body-spanning mohawk, the giant nasty skull-face, huge tusks, and beautiful dangly bone-bangles... Ahhh.

It absolutely kills me that I'm not sure if this can fit in my works. But I'm willing to talk it out.

Anyway. Overall I think it's pretty excellent. In-game textures are forever and always my baby.

Yeah XD I noticed when I tested it in the editor, and I was just logging in to mention that it works fine. (Rating Changed to 5/5) Great Work once again!

TOTALLY forgot about it. i got too excited to update because i finally fixed him from being static in-game during his spin animation.

This deserves a 5/5 + something more

What was the cause of the bug?
Click to expand...

turns out the problem was just me activating my dumb mode again and putting the frames of the spin animation to the same frames the decay animation has. i totally did not realize until i checked the frames lol.

Welp, Attack-1 animation is looking better, the armbands & shoulder-pad for more TC are perfect, the SFX is cool (I always love a hulking kind of "grr channeling"-type Channel animation, rather than dumb "waving arms around" that everything else has...) (though the purpley-clouds are weird for the Spell (then again, SFX are easy to edit, so no worries)), and the TC-eye-dots are perfect for giving him more character.

Somehow, unfortunately, there's still something that seems 'lacking' in terms of it being a Hero (as opposed to a unit)... This could just be my perception based on the other models I have as Heroes, though, so meh. :<

I guess I can just rip off the Hero Glows & reverse the Dissipate to make a Unit... Though he'll be missing Decay Bones. When you get a chance, Unit-version mayhaps? Or am I the only one that wants one?

That, and/or a Forest Troll version. I tried to switch the textures, but it wasn't done cleanly. :< But I suppose at this point I'm just being needy. xD

Models 35 Icons 3 Packs 1 Skins 1 Tutorials 1
I love it. It's great to see a troll that's actually different from the others in-game. The weapons are really cool, and I especially love the mask. It also fits in with the game pretty well, which is important.

Super cool, love it in every single way. Always wanted a Troll blademaster! 5/5

You have heard of this, right?

Though this is a great model.

Found it very usefull. The animations are fantastic and the portrait looks great. Rather useful!

A forest troll version of this model, and you have the actual Zul'Jin model to perfection. You should totally do that. If it takes like, 2 minutes or so.

DelmarVladek said:
A forest troll version of this model, and you have the actual Zul'Jin model to perfection. You should totally do that. If it takes like, 2 minutes or so.
Click to expand...

Unfortunately, it's not quite that easy. Many times, when a modeler uses a Troll skin, the textures are generally interchangeable between Jungle & Forest (as long as they used the Headhunter). You can do that for part of this guy... But other parts, they need a re-color. Specifically, at least the Batrider (for his legs).

I'm working on it. But it's not materializing anytime soon.

This model looks good, very fitting if we wish to create some sort of Berserker unit or hero! Thanks!

Damn, this model looks very good, and the icon is very much in line with the Manhunter's model, but also the icon is very like a cartoon or something, I would make it more smooth. But overall looks very cool, and the animations are very awesome. 9/10
You must log in or register to reply here.