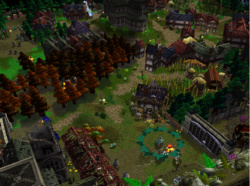 I am finally releasing my map, after long 6 years since the development on it started. Since then, lots of things changed, War3 is not played (sadly) as much, however, I still carried my original files with me as I was always "prepared to finish it".
(Just a note here - even though the development originally began on 2011, the project was abandoned for about 98% of the time. In the remaining 2%, I have mostly drawn plans and ideas on how the map should look like when 100% done, and as it was just too much, it was never realized... Until now, very small fraction of these ideas was put together into this Alpha release.)

The map you can see here is far from perfect, I am quite certain there are guys making better maps. However, my intention was to show what a Twilight's Eve successor can look like, if certain things are changed, in my opinion in better direction, as that map was my original pusher to even open editor and start working on this map.
Another thing is that there is "not that much" of a content in this release. For past 10 days, I have pushed hard to finish the map into playable release, as if I would like to push the "original 1st intended release", that would take at least another 50 days (or so), which I do not want to "waste", if there is no interest.
Therefore, you, players, decide on whether the map gets extended or stays like this forever.

Thanks to anybody reading this and trying my map out.
Have fun!

Kingdom Valenia was once very beautiful place to live. Many places to lie down, rest a little after tough work in living nature, full of friendly animals. Life here was like fairytale. But dark times fell upon the Kingdom. For several years, the crops yields have been shrinking, people started to starve, they had less money and there wasn’t enough work. Decay has spread throughout the land, leaving behind many corpses, complicating the life of the still living folk even more. Devious creatures have sensed all of this, and they came out of shadows...

Your story begins in dirty tavern, so called Wild-Storm. Here, you begin your journey in revealing the dark powers spreading throughout the land. Will you be able to find and stop them?

ORPG with basic Save/Load system
Two playable classes
Custom-tailored Inventory Management System with up to 11 items
Maximum level is set to 100
12 quests to drive you through the story in cinematic dialogue fashion
and more!

Credits:
The idea of creating this map started, when the creator of Twilight's Eve have decided, that further versions will no longer be public. Because I really like TEVE, although its not perfect map, I wanted to 'continue' in making map of this style.
So, the core of this map and my source of inspiration belongs to Green_Day_Dance and I have to thank him a lot for my his map and my inspiration also.

deepstrasz
1. I went back to the captain or whatever with the potions but nothing happened. 2. Message about completing the Nasty Babies quest after killing another troll baby repeats. 3. Too many troll units. A bit of diversity wouldn't hurt. 4. Naisha? 5....
Read full review...
Reputation Statistics
Show Ignored Content