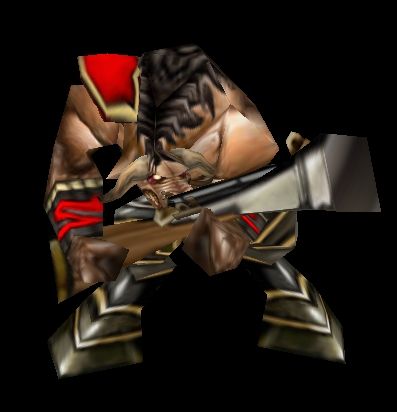 Models 4 Icons 52 Packs 2 Skins 30
Try to use some other texture for tauren, this one is boring, use white Razormane maybe.
I like the idea of making tauren with gun

Nice Tauren units apaka. ;;D What's next? Perhaps a winged Tauren for aerial unit? (Enduk)
...or maybe even a Tauren riding a bull for a Raider type unit?

Rhodesy said:
oh yeh i forgot to ask can any body please make a model like my avatar "rambo"
Click to expand...

Models 16 Icons 3 Packs 1 Skins 8 Tutorials 1
Nice, probably one of my favourite from you.

Yes, ever played wow? There the tauren Hunters use rifle by defult.

Icons 1 Packs 1 Maps 5
What'a funny man, a Tauren hunter is what I'm looking for months. This is perfect along with the Tauren Marine that General Frank made.5/5.!

looks nice has the tauren the attack-animation of the dwarf rifleman?

man tauren with a gun kind of takes out of the big brute tauren aspect but its good. Not perfect but really good. 4/5

And Thank You Very Much .

Maybe you could reduce it?

Skins 1
well i wonder why every one makes male taurens? and well the texture maybe should be switched ^^

Ty friky for point that out for me

Maps 17
ROFL!!!!!! i nvr seen taurens holding gun. they swore to the Mother Earth they use sword and etc and no gunsmith. see warcraft story.

kypto, Tauren hunters in WoW start off using guns as default. And if anyone's going to claim that WoW's lore is "wrong", Blizzard is the authority and whatever they say is canon, no matter which game of the franchise it is.

Also, great model. If you ever update it though, could you possibly fix the attachment points? I haven't tested the other ones, but anything that's applied to this model's origin ends up on top of its head. I'm pretty sure that means auras and buffs would do the same. (I can't believe no one's mentioned this.)

Maps 3
lol a tauren whit a gun ??? perfect for a bounty hunter unit but just that he's got a gun makes it look stupid 4/5

Nice model, animations are good. A bit choppy but good. 4/5

Does not work... Will not load just comes up as a checker box. Using WinMPQ

kryptosuper said:
ROFL!!!!!! i nvr seen taurens holding gun. they swore to the Mother Earth they use sword and etc and no gunsmith. see warcraft story.
Click to expand...

Thats just wrong if you ask me!

Models 1
nice model! can you make a female version of this?
You must log in or register to reply here.