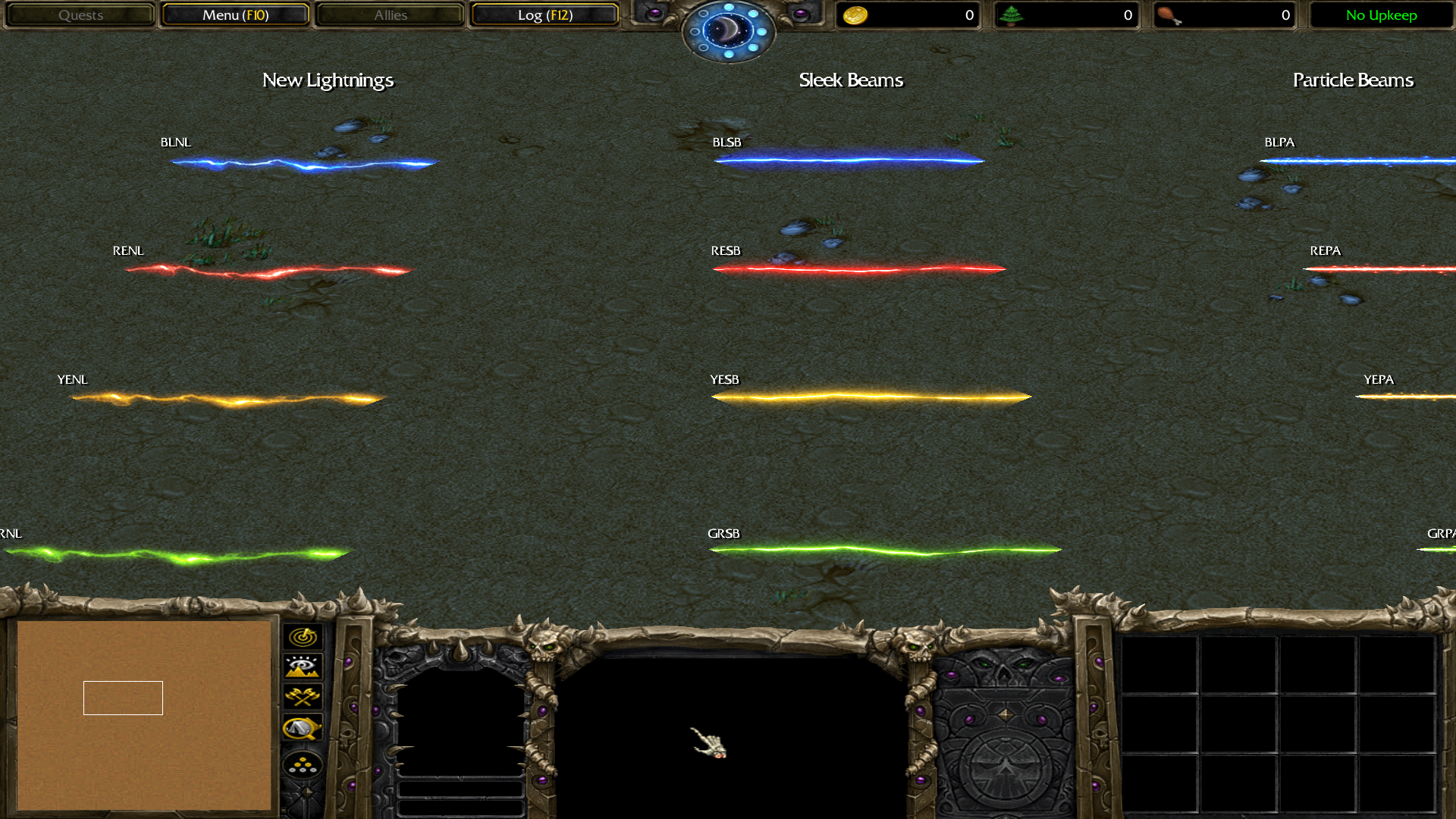 This bundle is marked as approved. It works and satisfies the submission rules.
View usage Statistics Legacy download
Reactions: Sclammerz, A Normal Yandere, hugope and 9 others
This is a collection of lightning effects I made. I don't really like Warcraft 3's vanilla lightning effects, so I decided to make my own. This pack contains 7 new types of lightning, each with 8 colours, and two bonus ones. You may use them as replacers, but in the LightningData.slk provided below has been edited to make these ligthning effects standalone.

New Lighning
The string to create this First two letter of the colour/concept + NL. So a blue New Lightning would be BLNL.

Sleek Beams
The same concept applies. Red Sleek Beam == RESB. Initially the code was SL, but I changed it to SB and only realised that some vanilla lightning effect use SB. Not really a problem, just can be slightly confusing.

Partcle Beams
Since vanilla lightning effects tend to go with PB and SB for Primary Beam and Secondary Beam, I went with PA for Particle Beams. Yellow Particle Beam == YEPA.

Beams
This is a more futuristic-looking beam. Use BM for the code. Green Beam == GRBM.

Targeting Laser
If you've played Starcraft II, you'll know of this unit called a Raven that can basically annihilate your entire army with seeker mines. These things use targeting lasers to identify their target, and that's basically what this is. Spirit Targeting Laser == SPTL

Chain
It's a chain design specifically for reeling things in. If you do not wish for it to move, you can edit the slk that accompanies the zip file. Fiery Chain == FICH

Chain Alt
This is somewhat of a slack version of the chain that doesn't move. Useful for if you want to link units together like the Demon Hunter does in Diablo 3, preferably with some immobilisation effect. Red Chain Alt == RECA

Other
There are additional lightning effects that I made just for fun. They are:
HLFX - Healing Flux
CONS - Constellation

The available colours/concepts are:
• Blue
• Red
• Yellow
• Green
• Fiery
• Mystic
• Spirit
• White, for if you want to colour the ligthning effects yourself.

HOW TO IMPORT
These lightning effects are not replaces. To import them, you require your lightning effect .blp file, and the LightningData.slk. Your import paths must be the following:

You don't HAVE to import all the lightnings. Just import those that you'll use. If you want to see the lightning effects in-game, download this test map and try it for yourself.
Give credit if you use.
Click to expand...

Heinvers
Pretty handy effects. I love the variations and how they were portrayed. Approved!
Read full review...

Maps 2 Tutorials 1
Maybe my noobism is showing, but I've never seen anything quite like this before (certainly not in this volume), so I'm very impressed. You're going to make me rethink so many of my practical effects in my campaign, which is not what I should be spending my time doing but I'm easily distracted HEY LOOK A QUARTER

I'm sorry. Sometimes I like to think I'm funny. Anyway, a simple but very useful asset. Thank you for providing an explanation for adding these to the game rather than replacing because I had no idea you could do that. I will review this (which means I will probably forget but keep this tab open on my computer for days on end anyway) once I've taken a look at these in-game.

EDIT: Tested in-game, they all look amazing! And by the way, the map link in your description has expired.

For anyone who needs them, here are the codes for the bonus ones that don't fit the normal code system:
HLFX - Healing Flux
CONS - Constellation
Last edited: Mar 30, 2017

Models 1 Icons 1 Skins 1 Maps 3 Spells 10 User Interface 4 JASS 2
Oh, I must have forgotten to set the pasta to never expire - and forgotten that the map was already attached to the thread . Thanks for pointing this out, will fix this post-haste! Also thanks for pointing the missing instructions for bonus effects as well
+rep
Last edited: Apr 6, 2017

Excellent lightening effect, I might use them in some maps 5/5

Models 3 Icons 65 Packs 3 Skins 27 Templates 3
Pretty handy effects. I love the variations and how they were portrayed. Approved!

Skins 2 Maps 7
Just checked out the video, this is so useful. The variety is insane!

Ported Icons 1
Hi Spellbound, I'm using your "Red Target Laser", but I have some issues.

First: Do you use Reforged?

My MPQ Editor does not find LightningData.slk, so I just used yours (which I guess is from Classic). However, doing so transforms all of the new Reforged Lightning Effects into the Classic ones. The Red Target Laser works properly though. Do you know how to fix this?

Models 1 Icons 1 Skins 1 Maps 3 Spells 10 User Interface 4 JASS 2
I did briefly look at the RF lightning and why importing the slk would overwrite all lightning effects, and I think it's because when you have an imported the file the game prioritises that over whether you're in SD or HD mode. The LightningData.slk in _hd has an extra field to it so I guess just add those in and it'll work?

Unsure. I've attached an slk with the HD entries, so this should technically retain the HD lightning effects, but I'm not sure as to the import path. I think it should still be Splats\LightningData.slk.

Ported Icons 1
This worked - thank you!

Packs 7
Hi mate,those lightning effects can be used for SFX too? Or just lightning for doodads/cinematics?

Models 1 Icons 1 Skins 1 Maps 3 Spells 10 User Interface 4 JASS 2
You can use them the same way you can use the vanilla lightning effects. To use them in an ability's Art - Lightning Effects, shift + enter and then type in the code (eg: BLNL for Blue New Lightning).

Spellbound said:
You can use them the same way you can use the vanilla lightning effects. To use them in tan ability's Art - Lightning Effects, shift + enter and then type in the code (eg: BLNL for Blue New Lightning).
Click to expand...

Models 1 Icons 1 Skins 1 Maps 3 Spells 10 User Interface 4 JASS 2
Since the download link on this resource's thread is broken, I took the time to upload the rest of the lightning effects here. This is the LightningData.slk for SD, although I think the Reforged one should work as well for SD. In case that doesn't, use this. Instead.

Oops. How can I use them as SFX for abilities, missiles or lightning type?
I download everything of this pack, and there is no MDX or MDL file.

I am editing a custom spell (named Volatile Light) of another HIVE user. 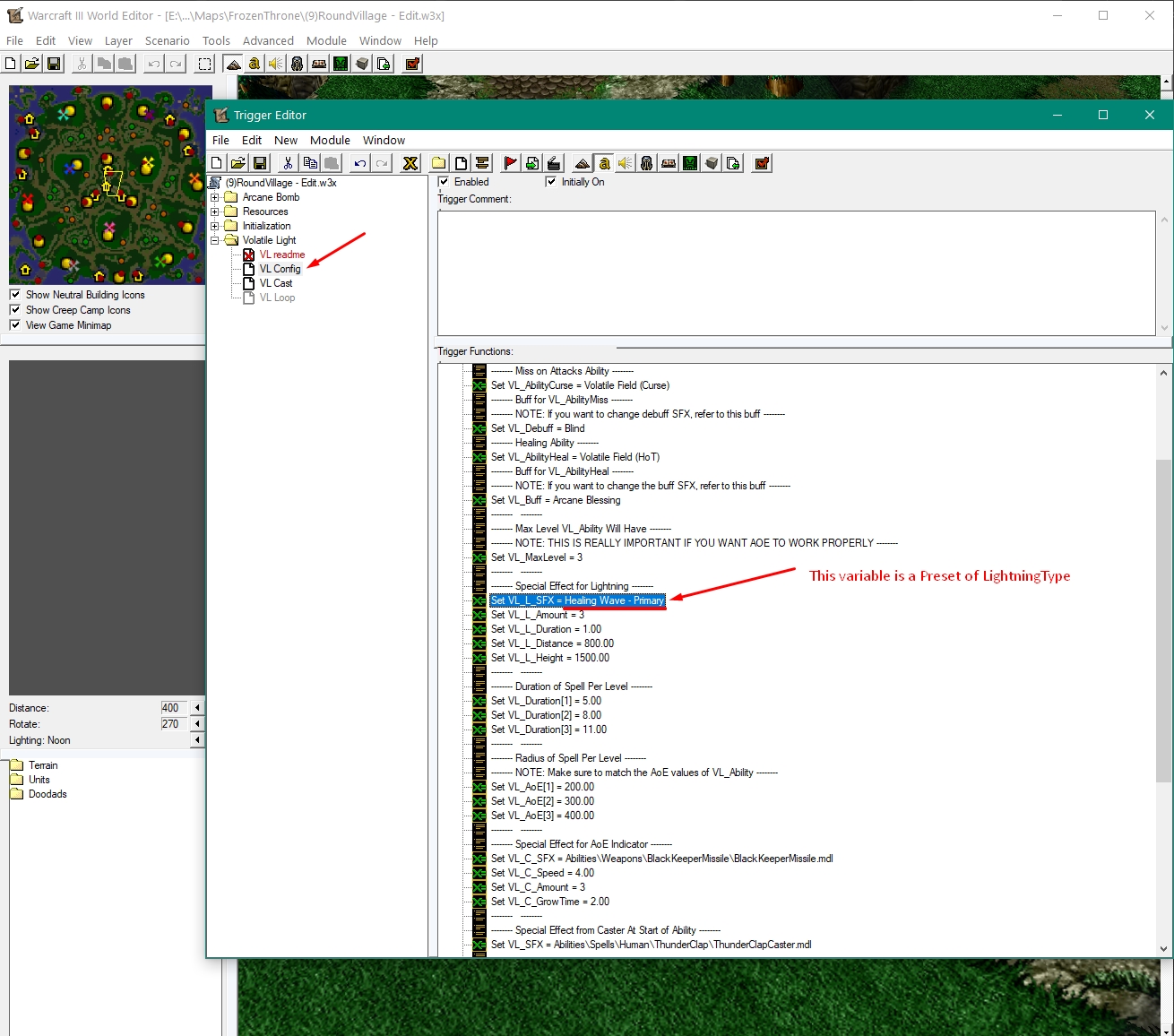 HOW TO IMPORT
These lightning effects are not replaces. To import them, you require your lightning effect .blp file, and the LightningData.slk. Your import paths must be the following:

You don't HAVE to import all the lightnings. Just import those that you'll use. If you want to see the lightning effects in-game, download this test map and try it for yourself.
Give credit if you use.
Click to expand...

WHAT IS "Splats"? And where should I put "Splats\LightningData.slk" to?

Models 1 Icons 1 Skins 1 Maps 3 Spells 10 User Interface 4 JASS 2
I don't know what variable type VL_L_SFX is supposed to be but lightning effects are strings, so you input the string name. For the custom lightning effects, eg Red Sleek Beam, the string is RESB, after REd Sleek Beam. Check the main post above.

This is so awesome, I'm gonna use the healing flux as a spell like transfer of soul per say based on the current patch in WOW.

God texture of lightning
You must log in or register to reply here.