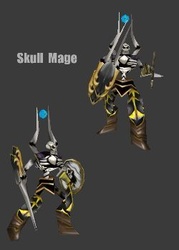 well, this is supposed to be an update for my skull warlock model that i forgot to update. silly me.
remember to give credits pls.