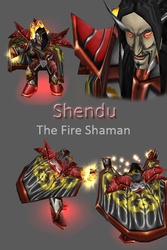 wow i never knew i would finish this. basically a firemage. so what more can i say? he's a mage that has fire powers >.<

give credits to me when you use it. icon will be coming if it will be approved

Moderator
08:52, 19th May 2011 shiiK: Undeleted by request. 08:55, 26th Sep 2010 shiiK: A few things I'd like you to fix before I approve this, read the review linked below. Detailed Review
Read full review...
Reputation Statistics
Show Ignored Content