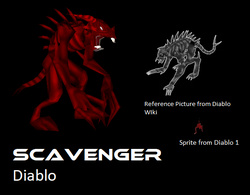 Since people were uploading Diablo models.
Ghoul with a dragon head, murloc death animations, a tail, some spikes, and a nifty skin.

I always preferred the Diablo 1 scavenger, before they started to look like weird hyena hybrids. Probably because I thought it were a cat back then. A really red skinny cat. It was probably the sound effect that fooled me, haha.