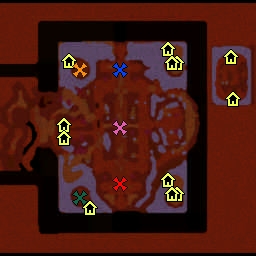 This bundle is marked as useful / simple. Simplicity is bliss, low effort and/or may contain minor bugs.
View usage Statistics Legacy download
Reactions: Scionic
Humans VS. Orcs
Back in the day...

This map is not complete... i am still going 2 b adding more details to it.
This map has minor icon problems that i already know about.

THINGS TO LOOK FOR!

1. CTF - There are capture points in the middle for each team in all 3 lanes, when captured they provide +1 to income and super creeps... Alliance and Horde Flag, doesnt mattr which flag is put in2 it, will activate the Capture Point. doubles the hp of the units and increases the attack power


2. Ranks - Varying on how many Hero Kills you get, u will recieve a "rank"


3. Reputation- how many hero kills you have = Reputation

18:08, 26th Jan 2009
Rui: Do not upload multiple versions of your map. This resource also appears to be incomplete.
[highlight]Rejected[/code].

This map is not complete... i am still going 2 b adding more details to it.
Click to expand...

Map section is only for completed map, alpha version are not allowed..

Maps 11
This map was originally me being bored... but after months of not touching it i decided 2 wrk w/ it again...

nvr had so much fun w/ my friends! current longest match 4v4 was 2hrs long... have fun all who dl this map!

This map shouldn't be here. Seeing how it's largely incomplete.

EDIT:
those r soon 2 b added... the only "incomplete" part is the lane which i fixed... (told Scionic and he now knows)

eventually when i get more and more posts, and the map gets closer towards completion i will get this map hosted online by any means necessary...
Last edited by a moderator: Jan 26, 2009

Packs 1 Maps 35 Spells 8 Tutorials 5
do not break the rules by multiple upload, we have the update button to serve the purpose.
You must log in or register to reply here.