omnilight only works one day

I have 2 omnilight triggers, one for day and one for night. They work the first day but they next days they stop working 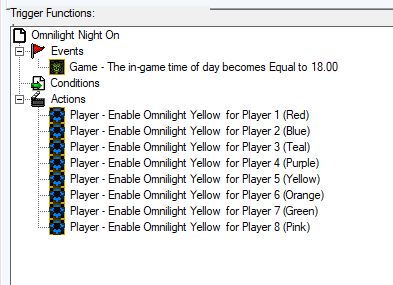 Spells 1
Show the trigger that turns them off again.

Pyrogasm said:
Show the trigger that turns them off again.
Click to expand...

Theres only 2 triggers. The one that turns off the light is the first trigger above.

Spells 1
The first trigger is only ever run once... at map init... because that's the only event it has. Add a second event to it:

warcraftmodding123 said:
Theres only 2 triggers. The one that turns off the light is the first trigger above.
Click to expand... 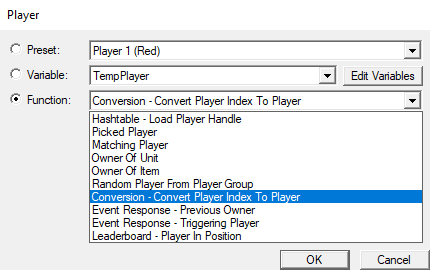 Spells 1
Well, it is only missing a set of () around the whole thing which is like... okay?

Models 78 Icons 1 Skins 1 Tools 6 Maps 12 Templates 1 Reforged HD Models 14 Ported Models 2 Sounds 3 Tutorials 1
Hey I happened to pass over this thread and be mildly interested -- is there any chance you could post information about what is in your ability editor for this Omnilight ability? I'm not certain that I totally understand the original goal.

If this ability is one that truly emits an omnilight around a particular unit, you might have another issue here based on the limit of the number of light emitters that can show in the game at a time. It was not clear to me if you were having a problem like that. I don't have that much information about your original problem (based on what is in your original post).

My first post on Hive in 2008 about 14 years ago was on this same topic, and as far as I know it was not ever really exactly solved. There are weird limitations to this game engine. So I was curious if you were having a problem like that.

Pyrogasm said:
Well, it is only missing a set of () around the whole thing which is like... okay?
Click to expand...

Thanks this works.
You must log in or register to reply here.