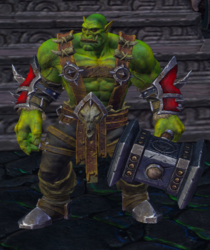 Ogrim Doomhammer before he became the Warchief of the Horde.
Model is made on base of Garthok.
Hero Glow is not attached, you can attach it via ability with art as path:
sharedfx\hero_glow\hero_glow