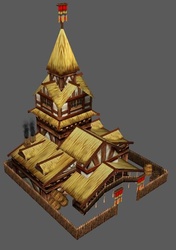 This doesn't really have to be norse...

And, the particles are actually supposed to be the way they are. I am sorry if they are not as crappy as the ones in Blizzard's models.

Moderator
21:30, 14th May 2009 LiOneSS: Oh my God. This building is awesome, I love the particles as well. :)
Read full review...
Reputation Statistics