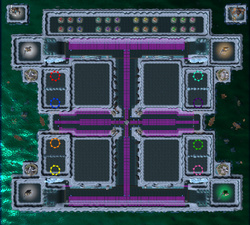 Welcome to the official release of Navy Cross TD


What is this map all about?

Navy Cross TD is a co-operative tower defense game with a twist
Like a traditional tower defense, you have creeps that run through a pre-determined area that you have to kill using towers in order to receive gold for future purchases. Each team(which we call a Navy) consists of 2 players that must work together to defeat other Navy's.

What makes our TD unique is the implementation of Legendary towers, among many other things. Legendary towers are buildings which need to be purchased with not just gold, but lumber also. Each Legendary tower is unique in it's own way, whether it be with upgrade-able abilities/buffs you can purchase, or just simply raw power.

What else is so special about this TD?

We have included lumber harvesting into our TD to make it stand out among the others. You can hire penguin slaves to chop wood and then exchange that wood for gold, use it to build legendary towers or to send creeps to another teams king.

A GAME WITHIN A GAME

There is more than one way to win/lose in Navy Cross. Every Navy has their own king, which can be upgraded using lumber. If your king dies, you die. This means that the goal of the game is not just to survive the wave of creeps, but also to keep your king from being killed. You can send creeps to attack enemy kings from your barracks. Sending creeps gives you income, which is displayed on a leaderboard for you to keep track of. Income is given at the end of every round.

Your builder(Navy Captain) can transform back and forth into his alternate form, which holds even more towers!

We understand that not everyone is a pro at tower defense games or simply just wants to learn the game without getting demolished and not knowing what happened. We have several game modes that allow you to play and enjoy yourself with leisure or you can try our impossible mode and really challenge yourself!


This map has been in development for a few years and has just finished going through testing and according to our public audience, they absolutely love it. You can rest assured that we will stand behind our hard work and constantly update and improve the amazing mechanics which we have already implemented.

Want to leave a comment or give us a sugguestion? Possibly looking to join our team?