For starters, this map is made purely for Naruto fans. It is simply hard to enjoy a Naruto based game if you don't enjoy the series.

Naruto games are very abundant, as well as RPG's, but there doesnt seem to be a very good Naruto RPG, or even one with a save/load at all.

Concept:
"Naruto Supreme RPG" takes place in the massive world of Naruto. Players can play as their favorite character in the series and explore the world playing through the story arcs. The game features a save/load trigger so that players can continue to build their character over time.

Characters:
Players originally can pick from one of the main protaganist of the series. However, every character with a skin(which includes the entire akatsuki as well as MANY others) is unlockable. Players unlock characters through gaining certain items. EXAMPLE: Say you kill Haku. Haku has a chance to drop a headband of water, seeing as Haku is a water shinobi. Now, every water ninja can be bought by a certain number of headbands, where Haku might be cheap and lets say Kisame might be more expensive. So through killing a certain faction you have an increased chance to unlock those characters. On that note, Akatsuki memebers will be purchased through Akatsuki headbands, which are only droped by Akatsuki (who are extremely tough), so they will be the hardest characters to unlock.

Quests:
"Naruto Supreme RPG" includes all of the main story arcs, filler story arcs, and movie plots. On top of that, there are near 50 (so far) side quest which I have made up that still stay true to the Naruto universe. Some quest spawn an antagonist that must be killed, while others spawn an item that needs to be retreived, and some are more complex than that. The main story arcs also closely follow the events in the series. EXAMPLE: The land of waves story arc is actually an escort mission where you must protect Tazuna. The quest can be retried if Tazuna dies, but the players will recieve deducted exp at the end of the quest.

Combat:
The combat system is nothing out of the box, simple rts style click and wait. However, attack damage is comparatively low to life, so battles rage on longer than most other rpgs. That gives the villains multiple chances to use their destructive jutsus as well as the players more time to use theirs. In the end, the way its balanced makes battles go on longer, making it feel like its an epic technique slinging battle straight from the series. Every enemy will use spells that they use in the series, so the fights will not be dry.

Items:
There is a standard item class system, where players cannot have more than one weapon, armor, headband, ect. However there are many basic weapons, and each one is multiply upgradable with many branches, so that a player can upgrade down one branch and be built totally different than someone else playing the same character. Also there are some new item types.

Scrolls: Scrolls are permanent items that let the player cast Jutsus. The scrolls take mana and have a cooldown, but you can use them as long as you have them. This lets players build their spells for a certain strategy and not just have the default character spells. Most scrolls will be upgradable

Feats: Feats are purchaseable permanent combat benefits. Some feats simply help out your own ninja, like a dodge chance or heightened mana regen. Some feats also help out your teamates (basically Auras). This lets a player build a more combat orientated Ninja. Most feats will also be upgradable.

All in all, this is a standard save/load rpg that doesnt do anything extremely out of the box, but it will please Naruto fans who want to play their characters in an environment that isn't an AOS. If you are not a Naruto fan, you can still enjoy the game but won't get the pleasure of unlocking your favorite character and playing through the story arcs with him.
This game will not be playable single player. I am not afraid of cheats, its just that this rpg is very team based. The game would be impossible for one player to play through unless he saved and loaded an extreme amount of times. All exp is shared, so the game is meant to be played with friends and groups.
Still Needed:
I do not have every model I would like, if you have any of the following models and would like to give them to me (I will give credit to whoever the maker is), please pm me
Sakon
1st, 2nd, 3rd Hokages
Jariya

Thanks for reading and sorry for no screenshots.
Last edited: Aug 5, 2008

People will most likely think "TL;DR" because of the huge wall of text. Add some soft colours in the categories; Like;

Would look better and make it somewhat easier to read.

Alrite time to add some screenshots 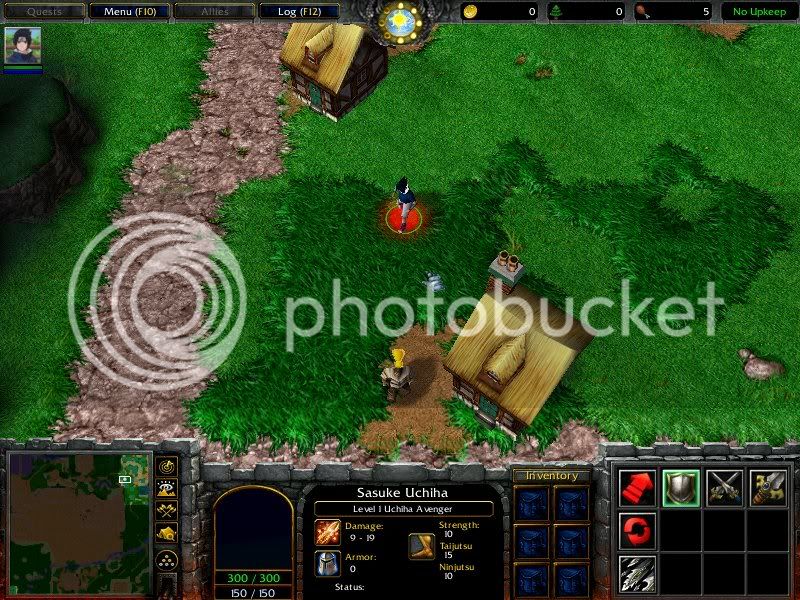 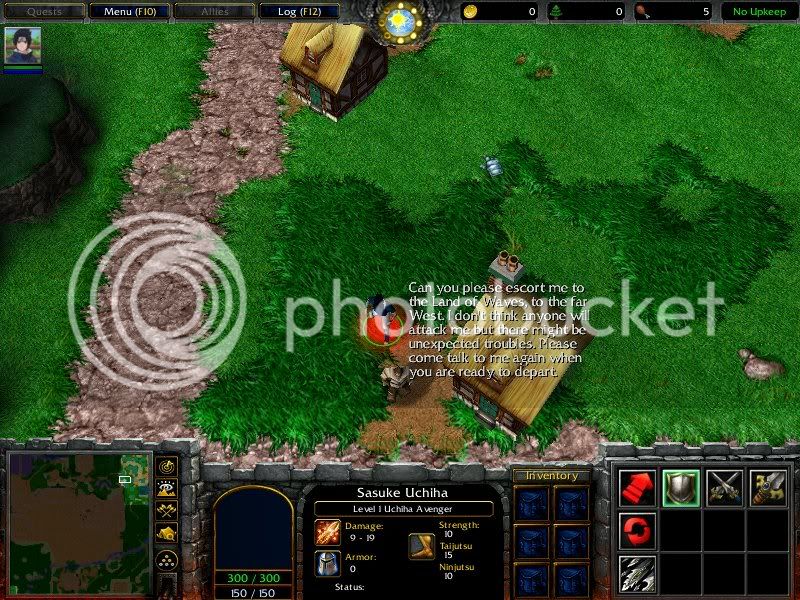 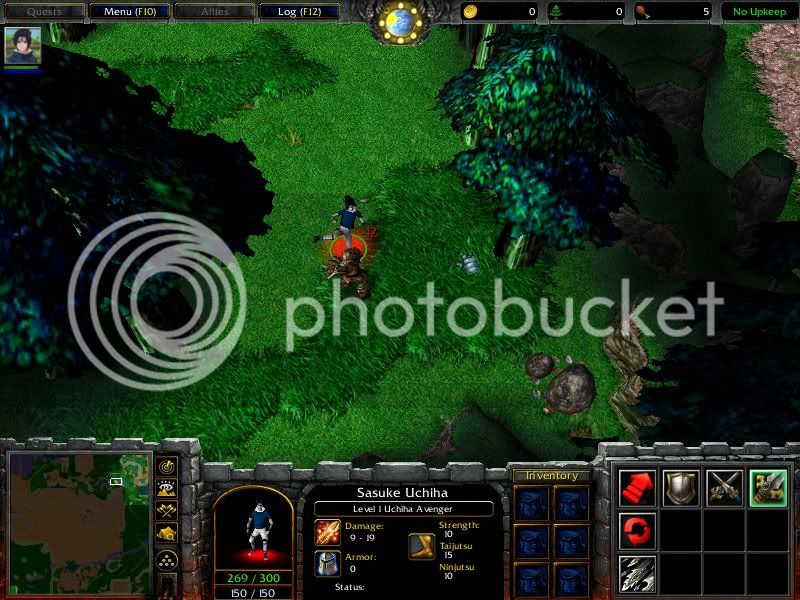 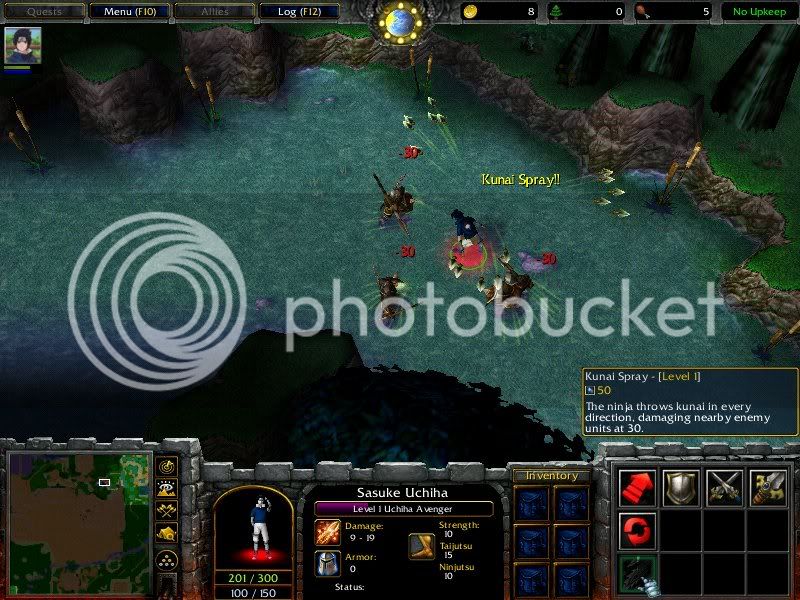 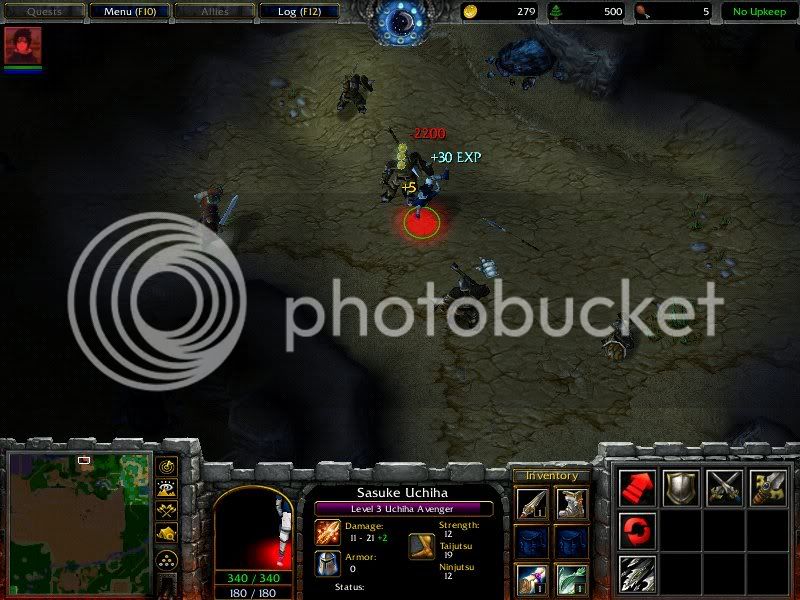 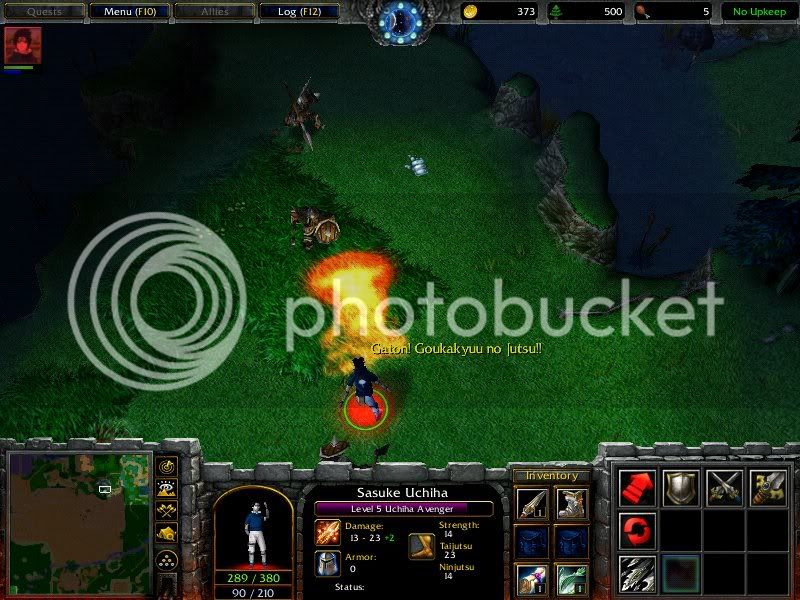 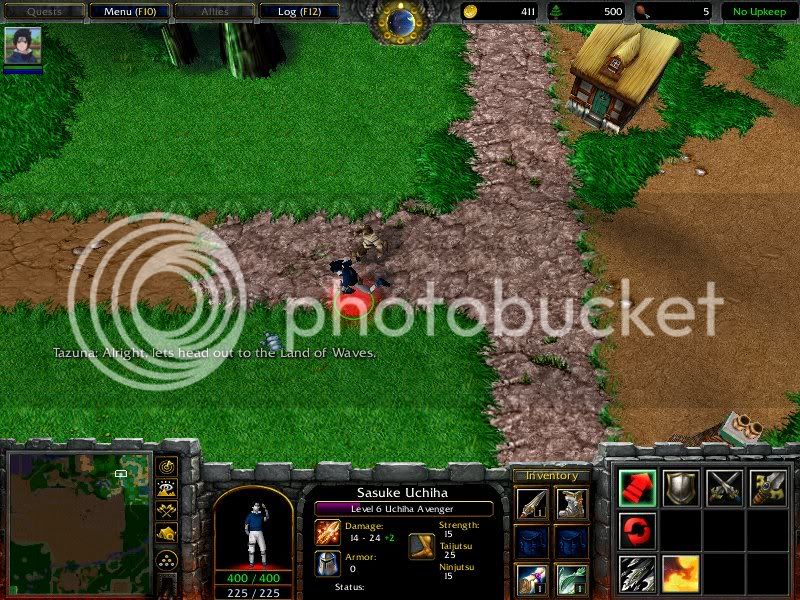 The Land of Waves story arc is actually an escort mission. If Tazuna dies you can still do the quest, but you won't recieve the bonuc exp at the end of the Arc 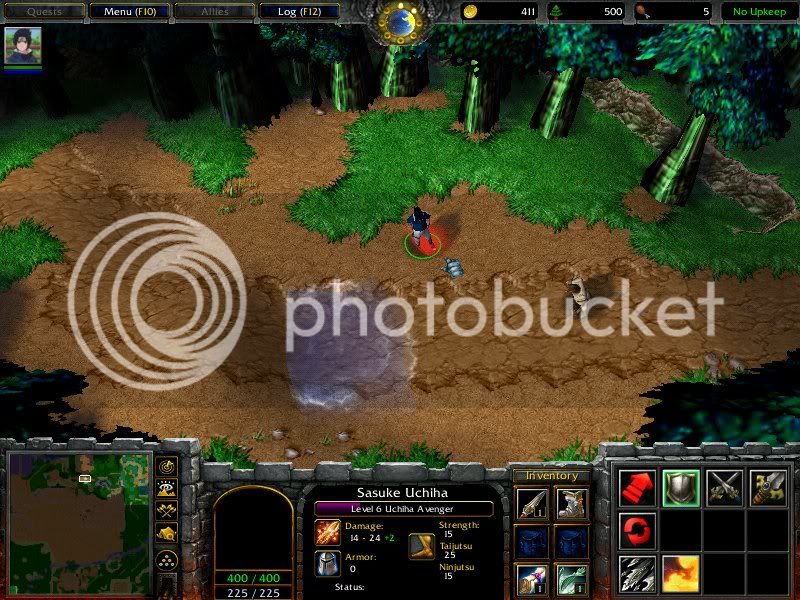 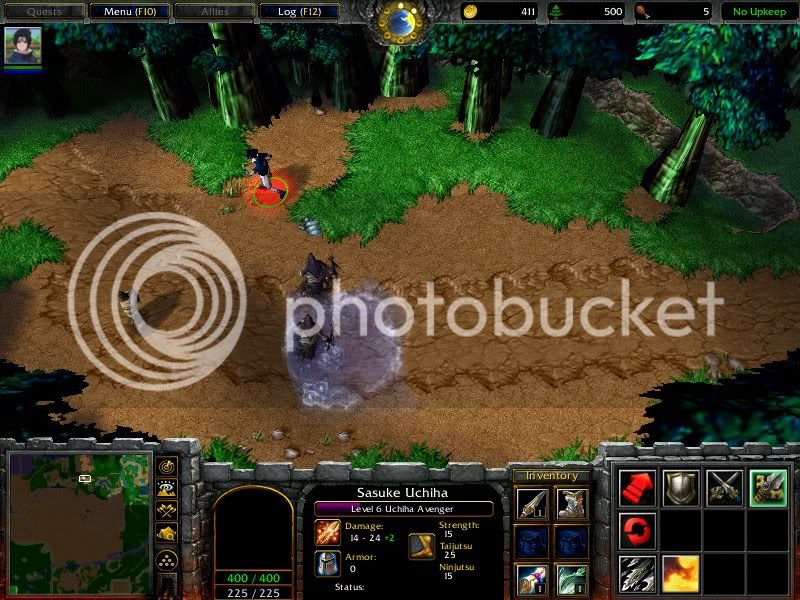 This are just a tiny bit of screenshots from the first couple minutes of the game. There are plenty more screenshots to come. Please post what you think I could do to make the map more enjoyable for all Naruto fans. BTW if you are just going to flame Naruto, go join the anti-Naruto user group, don't bother posting here.

Well, i only saw stupid dbz save and load rpgs.. and never a naruto rpg.. okay I saw some but, THEY SUCKED. I hope this gets better..

Models 8
maby u should use shippuden models for a shippuden rpg?

Maps 1
"Concept:
"Naruto Supreme RPG" takes place in the massive world of Naruto. Players can play as their favorite character in the series and explore the world playing through the story arcs. The game features a save/load trigger so that players can continue to build their character over time."

doesnt sound like shippuden to me, good luck with your map, hopefully it'll be a good map

Making it shippuden would limit the amount of story arcs I could use dramatically, plus players wouldnt even see some of their favorites (like Kimimaru). I was contemplating tho once a a main character reaches a certain level, switching his model with a shippuden model and giving him some new spells and stat boosts.

Yea, that could be a good idea.
Like first one is a ninja, and after some levels you can switch to naruto... sasuke.. and the rest of starter ninjas. And after that level, it depends what you picked, like If you picked sasuke, later you can pick the cursed sasuke, and after it like kimimaru or the other ones. Cause theres a connection, or you can keep and play till the shippuden sasuke. Wich will take longer, but more stats and better spells than switching to kimimaru.

Finallegacy said:
Yea, that could be a good idea.
Like first one is a ninja, and after some levels you can switch to naruto... sasuke.. and the rest of starter ninjas. And after that level, it depends what you picked, like If you picked sasuke, later you can pick the cursed sasuke, and after it like kimimaru or the other ones. Cause theres a connection, or you can keep and play till the shippuden sasuke. Wich will take longer, but more stats and better spells than switching to kimimaru.
Click to expand...

Thats a good idea, but I already have my mechanism for unlocking characters (if you read in map description first post)

Hmm, what about character unlock, can everyone, but gettin the character, takes some requirements? Like you have to be sasuke also like I said, with a connection, not Naruto can fast get akatsuki. Like, Sasuke->Itachi he's from akatsuki, so you can pick everyone. Or like that kisame, hes familliar to Zabuza, the 7 sword mistess or how that's called >.> OR will it just be headbands?

Killing from a certain faction is the only way to unlock characters. Say someone really likes itachi, but hates asuke (like everyone does). Im not going to force people to play as sasuke just to unlock their favorite guy.

Maps 1
so it's pretty much, pick the character from the beginning, and he'll evolve overtime
You must log in or register to reply here.